My decade of faliure 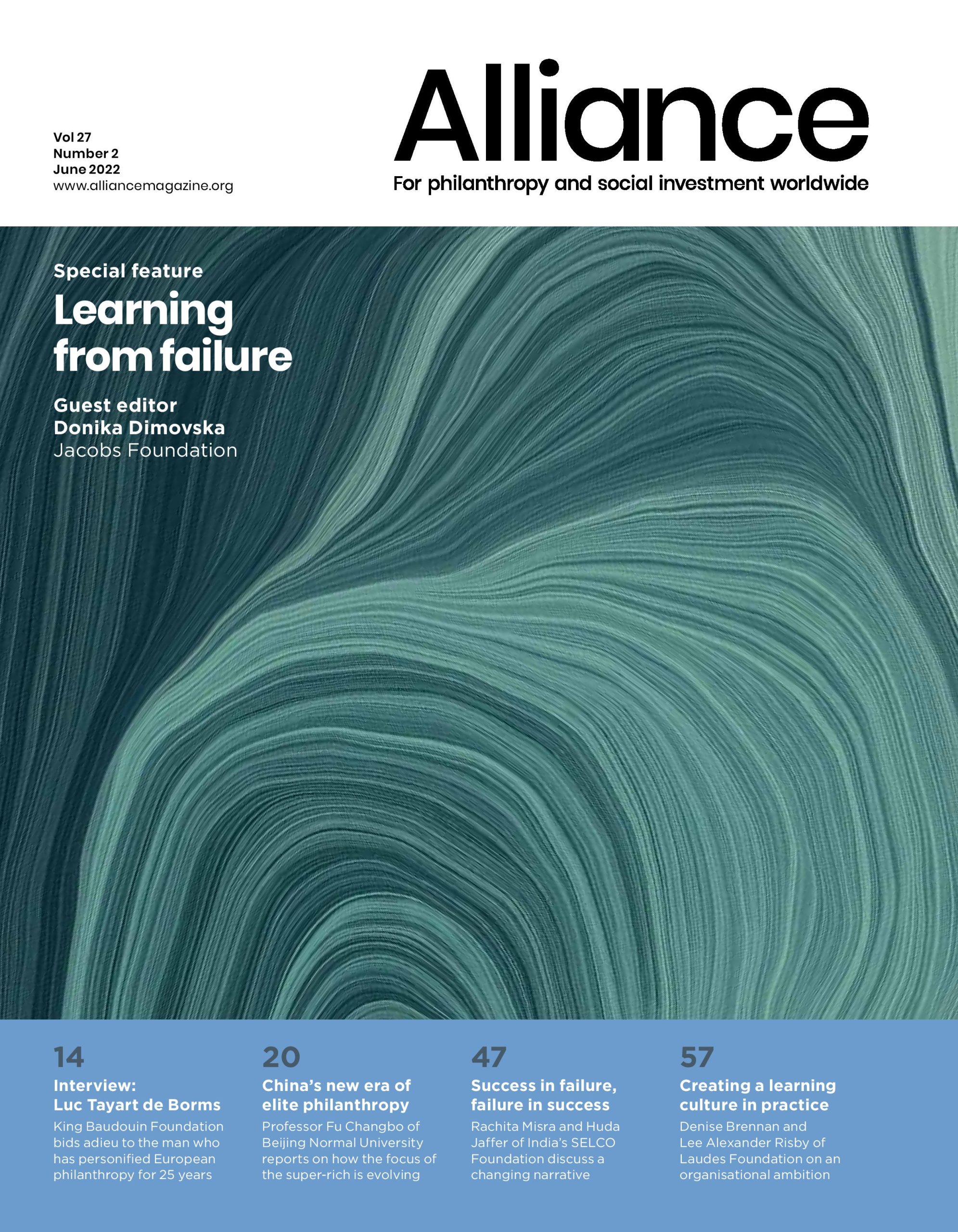 Fit to fund: Who should pay to raise standards for good financial grant practice?

Everyone has their own experience of professional failure – each in their own way. Mine was at the end of 2012 when I said goodbye to my colleagues at the Pears Foundation for the last time.

I had good reason to feel a sense of accomplishment. The organisation I led went from standing start to leading foundation during my decade-long tenure working alongside Trevor Pears, one of the UK’s most decent and committed philanthropists.

But despite good wishes and heartfelt congratulations, and even a very special book I received with generous messages, my work never felt like a success. Instead, I was dogged by a feeling that I’d failed. Why?

Looking back, I realised that the foundation’s guiding spirit, to make being Jewish synonymous with doing good for all humanity, was in conflict with willful ignorance or complete denial within Jewish philanthropy circles about realities in Israel and Palestine – what expert observers from the UN to Amnesty have today said amounts to apartheid. Our purported values too often felt discordant in my interactions about Israel with fellow Jews in the diaspora and during frequent visits. It was this tension which came to dominate and eventually overshadow my work.

Rather than confronting it head-on, our philanthropic navigation strategy focused on creating space and opportunity for people to see things for themselves. We established a task force to enable British Jews to meet Israel’s Palestinian citizens who comprise 20 per cent of the country’s population. We supported university initiatives giving students conflict analysis skills through careful exposure to multiple perspectives during trips to the region. 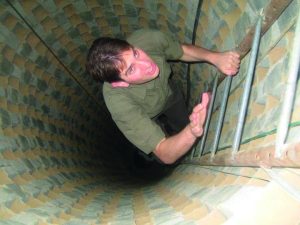 In August 2009, with the UN, I visited tunnels
near Rafah used to smuggle items
across the Gaza-Egypt border.

We established the Pears Institute for the Study of Antisemitism to offer informed insight into the sources of contemporary antisemitism. That included helping to manage the global fallout of the Israel-Palestine conflict through rigorous analysis of the conditions under which criticisms of Israel could be fairly said to be antisemitic. We funded lectureships in Israel Studies to deepen and contextualise knowledge about Israel and explored ways to support Israel and Palestine Studies. Most challenging of all, we supported work fostering dialogue with reactionary political forces including Shas in Israel and Hamas in Gaza – which had assumed control of the territory in 2006 following elections.

Much of this was risky philanthropy. It would have been far easier to follow mainline Jewish foundations supporting pro-Israel activism on campus, and charities such as Birthright, which offered young Jews free trips to Israel – to ‘get laid on gift aid’ as people used to quip. But my conscience pulled me in another direction. After a visit to Hebron, where the unequal treatment between Jews and Palestinians hits hard, I wandered in a haze repeating to myself – ‘we’re in the wrong, what the fuck are we gonna do about it?’.

The ‘we’ here, for me, were the Jewish philanthropies and communal infrastructure maintaining support for the reality I saw in Hebron and across Palestine. Eventually, my conviction deepened into a philanthropic endeavour. That endeavour was to ensure that the truths I saw would be seen by others and to dispel any self-comforting illusions about peace, coexistence and two-state solutions.

Instead, the task was to prepare the diaspora ground for equality for all and the end of Zionism.

To other foundation professionals reading this, my message is: aim high but be ready to fall.

Despite the risks, the work felt existentially rewarding – travelling beyond the comfort zone of Tel Aviv to meet colleagues in Nazareth, Bethlehem, Ramallah, Nablus and ultimately Gaza. I also think that my frequent interactions with Palestinians did much to foster trust and mutual understanding and help dispel any antisemitic stereotypes which may have existed.

Rewards came from elsewhere too. A few months after the then British ambassador was briefed on our work, our foundation’s chair was awarded a special diplomatic honour for services to British-Israel relations. Our approach was gaining recognition.

But eventually, and perhaps inevitably, the bottom fell out. Sceptics told me I was ‘mad’ to visit Palestine during my trips to Israel. Enemies branded me an ‘Arab lover’. But the more serious charge came from Israel’s then ambassador. ‘We know what Charles is doing – stop him or sack him’ was his message.

A communal newspaper used a front-page story to round on us too. Colleagues were understandably unsettled. And as the space to operate shrunk, I realised my endeavour was doomed. I left at the end of 2012 and headed in a haze to the US on sabbatical. Other progressive foundations departed the field for their own reasons around the same time, including the Ford Foundation and the Skoll Foundation. The latter’s embryonic work was curtailed by the departure (and then tragic death) of its pioneering Middle East programme officer, Scott Field.

In the years since, I’ve reflected on my failure to achieve the goal of changing hearts and minds. Was this because the goal was too ambitious? Or was it due to my own shortcomings and inexperience? Perhaps my successor rightly prioritised other things in pursuit of more achievable objectives? No doubt all this was true. But at the same time, I cannot escape the thought that my own failures were an indication of a wider and still ongoing failing of collective moral responsibility.

The baleful reality I sought to tackle has only deteriorated in the decade since. Settlements have multiplied across the West Bank, Gaza remains under blockade and Israel’s politics have moved further rightwards. Western governments have by and large remained either supportive or acquiescent in the face of these developments. And so has Jewish philanthropy.

Meanwhile, the task force enabling Jews to meet Palestinians has been disbanded. And it pains me that last year, the Pears Foundation removed its name from the institute it presciently established to study antisemitism. It said that the ‘challenging and divisive issues’ tackled by the institute made an ongoing association incompatible with the foundation’s best interests.

Today, Palestinian rights and Jewish safety are presented as binary choices. You can choose one but not both.

Yet, out of this abyss, progressive Jewish social movements are emerging. Without any meaningful philanthropic support, grassroots groups like Na’amod are carrying forward a new wave of activism to challenge zero-sum thinking and moral failure. That gives me solace and, despite my failures, I’m still glad I played my part. In an essay titled ‘The art of philanthropy’ Dennis Collins, former director of the James Irvine Foundation, quotes Benjamin Mays: ‘Not failure but low aim is sin… the tragedy of life doesn’t lie in not reaching your goal. The tragedy lies in having no goal to reach.’

To other foundation professionals reading this, my message is: aim high but be ready to fall.

The outgoing director of the King Baudouin Foundation, Luc Tayart de Borms, stands out as someone willing to take risks during his stellar career at the heart of European philanthropy. We interview Luc and hear some frank reflections. Our special feature, too, is full of perspectives on learning from failure. It has been expertly guest-edited by Donika Dimovska of the Jacobs Foundation alongside our features editor, Andrew Milner. I’d like to thank them both for offering up our trademark in-depth look at the topic.

You wrote a courageous lead editorial about a difficult choice. It really reflects positively on your values of progressive social change and political equity. Congratulations for really offering this personal reflection that can inspire others in philanthropy.

An agenda for mental health philanthropy