Attitudes to solidarity in the European Union

Hungary – Introducing the concept of governance

Questions of solidarity go to the heart of the European project. While solidarity implies ties of support and sympathy across national boundaries, notions of EU solidarity have been under strain in recent years. In particular, the euro crisis created a divisive narrative between ‘creditor’ and ‘debtor’ states laced with moral fervour on both sides, while the refugee crisis generated radically different responses across the continent. Lingering tensions over the proper balance between solidarity and individual responsibility demonstrate some of the challenges of promoting the EU’s treaty objective of solidarity. These tensions are also reflected in the competing interpretations of solidarity at play in a union with very different levels of wealth and prosperity.

The UK’s EU referendum debate was a recent and striking example. Britain is a net contributor to the EU’s budget, and for a country whose commitment to European integration rested more on a calculation of costs and benefits than a sense of European identity or vocation, any net contribution became harder to defend. Simply put, solidarity was in short supply.

For these reasons, solidarity was one of the issues examined as part of a new project on attitudes to the future of Europe led by Chatham House. 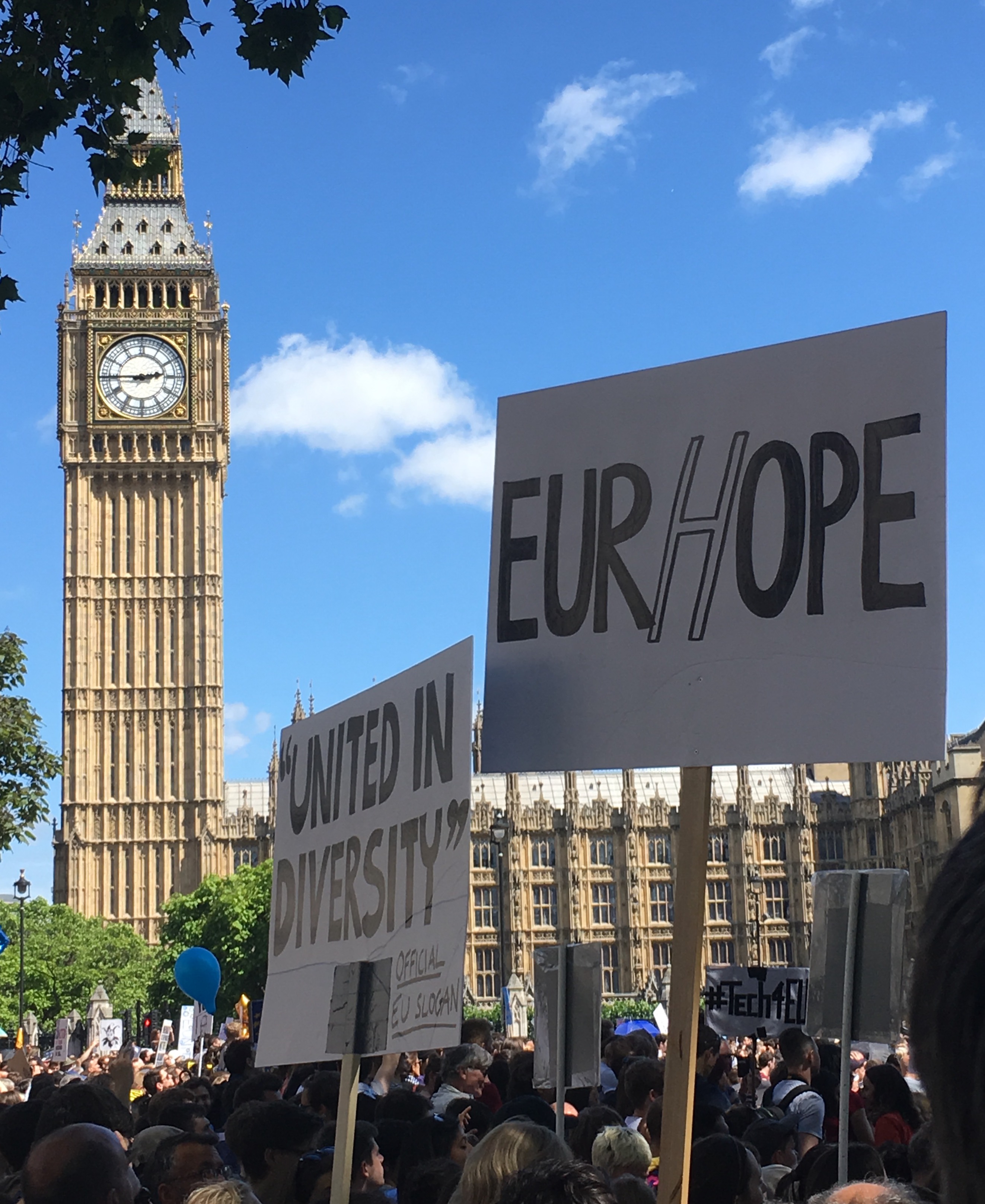 Notions of EU solidarity have been under strain in recent years, as exemplified by the divisive UK referendum vote to leave the EU. Photo credit: Alex J White.

This project – supported by European foundations including the King Baudouin Foundation, the Mercator Foundation, the Robert Bosch Foundation and the ERSTE Foundation – seeks to examine the distance between the general public and those in positions of influence (in politics, the media, civil society and business) in their attitudes to European integration, and to compare these views to wider political perspectives and differing social experiences.

Through this new dataset of public and ‘elite’ attitudes, we were able to examine how aspects of solidarity are viewed across ten* different EU member states.

Solidarity between states
First, we tested support for the assumption that the EU should be a redistributive union. We presented respondents in both groups with the statement: ‘In the European Union, richer member states should financially support poorer member states’, and asked how much respondents supported this claim. A total of 48 per cent of respondents across the ten-country sample agree, while 20 per cent disagree.

Even the countries in which support is lowest, including Germany and Austria where bailouts of struggling eurozone economics have been politically divisive, more respondents agree with the statement than disagree with it.

Among elites, support is emphatic: 76 per cent agree, with just 13 per cent disagreeing. So among both the surveyed groups, support for a redistributive union, and the solidarity that it implies, is robust.

This reflects a general correlation to GDP per capita where the five wealthiest states surveyed have the five lowest levels of support.

When looking at net-support for redistribution among different European publics (ie the number of people who agree minus the number of those who disagree), the public sample splits coherently into two groups of five countries: strong supporters – Greece, Hungary, Italy, Spain and Poland – where net agreement is around or above 50 per cent, and a much more ambivalent group of five countries – Austria, Belgium, France, Germany and the UK – where net support stands between 4 per cent and 15 per cent.

Unsurprisingly, this divide also maps on to budget contributions. Net contributors are in the ambivalent group, and net recipients are in the supportive group, with one exception.

Italy is the outlier: a net contributor to the EU budget with relatively high GDP but very high levels of support for redistribution.

Solidarity between citizens
The survey also sheds light on attitudes to different aspects of solidarity.We examined the extent to which individuals believe in self-reliance versus the expectation that the state should provide for people’s welfare.

A striking 63 per cent across the countries agree, with just 13 per cent disagreeing. The countries where the highest number strongly agree were Austria, Spain, France and the UK, while in Greece and Hungary people were more likely to disagree than the average.

Our three measures were to ask whether individuals had experienced any of the following in the last 12 months: gone without necessary medical treatment; been unable to pay for essentials; or had to share their residence with friends or family who were struggling financially.

As part of the survey, we also included measures of social hardship, to explore whether economic difficulties were correlated with wider political attitudes.

This allows us to identify groups who are struggling and whom policies that promote solidarity should support, and see how their views differ.

We compared this group’s attitudes to the EU with those who have experienced none of the social hardship measures.

When asked their views on the statement ‘People like you have benefitted from EU membership’, there is a relatively similar distribution between both sets, with the exception of those who strongly disagree.

Among the social hardship group, the number who strongly disagree doubles to 25 per cent.

But it is notable that beyond the spike in strong disagreement category the differences are modest; attitudes seem relatively resilient to social hardship effects.

The future of European solidarity
In the long term, solidarity requires not just a budget that reflects it, but a public that believes in it. A lack of solidarity among publics reduces the legitimacy of the EU institutions, impairing their ability to promote European responses to shared challenges.

It also lowers the costs that publics will bear in pursuit of solutions and reforms, and fans the flames of populist politics.

But overall, our data suggests a reservoir of support for a redistributive union, among both the public and Europe’s leaders. This attitude is held alongside a robust belief in self-reliance.

A lack of solidarity among publics reduces the legitimacy of the EU institutions, impairing their ability to promote European responses to shared challenges.

These findings do not downplay the challenges of building a fairer, more cohesive European Union, but they underscore the belief that an EU marked by very different levels of income should still be one in which those with more support those with less.

*Methodological note
The Chatham House Europe Programme, with Kantar Public, surveyed nationally representative samples of the population aged 18 or over in Austria, Belgium, France, Germany, Greece, Hungary, Italy, Poland, Spain and the UK as part of the Contested Legitimacy in Europe​ project.

The overall number of elites interviewed was 1,823 (between 160 to 200 per country). The elites interviewed were identified using four broad categories: elected officials, journalists covering politics, business leaders and civil society leaders. The survey was conducted via national research agencies predominantly by phone. In some countries, some interviews were conducted face-to-face or online.

The broader results of the survey will be published by Chatham House in June 2017.

What is solidarity? Practitioner perspectives