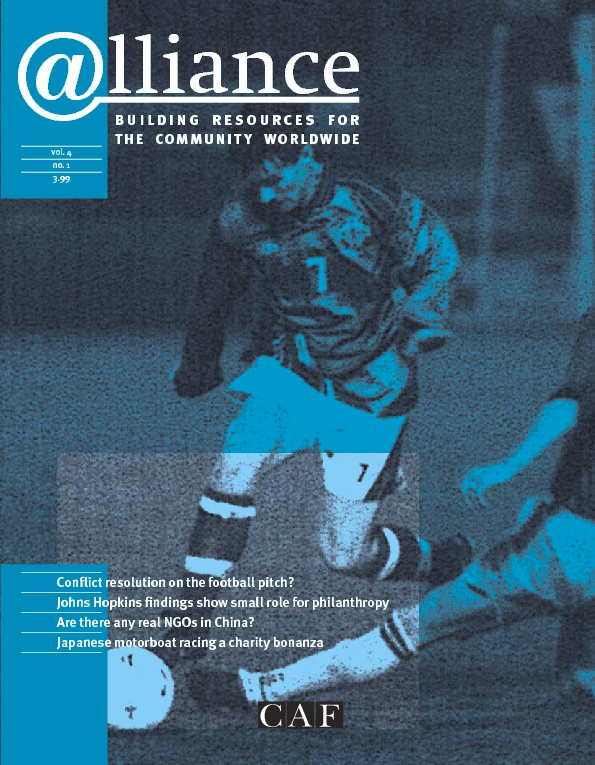 Improving the transparency of international aid

Does the reality of CSO involvement in World Bank projects match the much-vaunted rhetoric of participation – or indeed the Bank’s own definition of the term? In any case, would the citizens of borrowing countries not be better served by participatory governments than by a participatory World Bank? These are some of the issues raised in the second of Alliance’s assessments of the developing relationship between the Bank and CSOs.

Donor and creditor institutions, such as the World Bank, are creating strategic alliances in order to:

How does the World Bank currently implement participation efforts? It allies itself with powerful partners (eg public and private sector investors and strong borrowing governments) to pursue its SAP agenda. It allies itself with relatively powerless parties (eg weak governments and CSOS) to mitigate the negative effects of SAPs and, on the periphery of its operations, achieve some aspects of the popular agenda.

Increasingly, CSOs participate in shaping the development projects financed by donor and creditor institutions. In some cases, this participation builds ownership of and support for projects. CSO involvement sometimes ensures that projects serve the goals of the popular agenda.

Unfortunately, CSOs seldom participate in shaping SAPs. Donor and creditor institutions actually market SAPs to populations in developing countries. That is, they cross the line from facilitating home-grown development initiatives to selling pre-cooked initiatives. Imposition of SAPs – even if their prescriptions are sensible – undermines democratic participation and pluralism.

Popular participation in economic development decisions is vital because it often helps to achieve other goals of the popular development agenda. It is increasingly seen as an important cure for the problems that ail development. Participation makes good business sense because, under most conditions, loan performance and sustainability (eg the potential for lasting development gains) improve with greater local ownership of, and involvement in, loan operations. Development gains may translate into reduced hunger and poverty and greater equity and social and environmental sustainability.

The Bank’s definition of participation …

The Bank defines ‘participation’ as ‘a process through which stakeholders (eg NGOs and labour unions) influence and share control over development initiatives, decisions
and resources which affect them’. According to the reports of Bank staff, however, it is difficult to identify operations in which stakeholders share power with the Bank and/or the borrowing government.

Alliances need to be inclusive and accountable. Parties to alliances (eg developing country government (DCGs) and CSOs) should have equal access to levers of decision-making and equal access to information about anticipated and actual Bank-financed loan operations. In reality the Bank often surveys or consults with parties affected by Bank-financed operations and involves CSOs in project implementation, but it seldom employs genuinely participatory approaches.

Most of the people and communities affected by World Bank-financed operations might be called ‘subjects’. A subject is defined as ‘a person who undergoes some form of treatment at the hands of others’. Subjects may be studied, interviewed or consulted by the World Bank and/or their governments; however, they do not share control of decisions about Bank-financed activities. Bank-financed operations have few provisions for downward accountability of the DCG and its financiers to its citizens. Environmental Assessments performed for some projects require the DCG to consult with the public, but this requirement is often honoured in the breach.

There is thus a disconnect, or gap, between the Bank’s definition of ‘participation’ and its functional use of the term. The Bank uses the term ‘participation’ to refer to functions in which NGO stakeholders do not share control with the Bank. These functions take many forms: information sharing, data gathering, beneficiary assessments, firm surveys, rapid rural appraisals, NGO consultations and workshops, and academic research. These functions are generally constructive, but they are not participation, as the term is defined by the Bank. By wielding the term in a misleading way, the Bank can claim that nearly half of its operations are ‘participatory’.

Bank data collection systems also serve to exaggerate the extent of participation in Bank projects. Bank data should be improved in order to:

Perversely, some Bank attempts to foster democratic pluralism are having the opposite effect. At the 1996 meeting of the World Bank–NGO Committee in Accra, Ghana, African NGOs warned the Bank not to circumvent democratic governments to consult directly with NGOs about country-wide policies. Such behaviour on the part of the Bank can usurp DCGs’ prerogatives and short-circuit dialogue between DCGs and their citizens. Even in pursuit of admirable goals, such as poverty reduction and participation, the Bank should not undermine a democratic developing country government.

In the long run, citizens in borrowing countries are better served by participatory governments than by a participatory World Bank. The Bank should be commended for its increasingly participatory approach to Bank-financed operations. However, it should do more to encourage DCGs themselves to adopt such approaches.

As it is, the Bank rarely uses its influence to encourage DCGs to take participatory approaches to development. If it did, weak DCGs might bow to World Bank pressure. Because of their dependence on the Bank for credit, they can be pressured to undertake politically sensitive reforms (eg land reform or privatization of state-owned enterprises).

Strong DCGs with alternative sources of credit will seldom yield to Bank pressure to adopt conditionality, especially governance conditionality. There is a story that one day, when a World Bank delegation was visiting China, a junior Bank official asked his senior Bank colleague whether the Bank was pressuring China to permit greater levels of grass-roots participation in development. The senior official replied, ‘We are fortunate that China is allowing the World Bank to participate in its development efforts.’

Nancy Alexander is Director of the Globalization Challenge Initiative.

This article is part of a longer article written as part of the Development Bank Watchers’ Project for the Bread for the World Institute. The full article was published as ‘De nieuwe strategische allianties van de Wereldbank’ in Derde Wereld, JRG 17, NR 1-2 June 1998.

The Globalization Challenge Initiative aims to empower CSOs to work more effectively on globalization issues through the provision of information and interpretation about the Bretton Woods institutions. It publishes a quarterly newsletter on the World Bank and the IMF – News and Notices for World Bank Watchers.

Philippine NGOs to be self-accrediting for tax purposes