Empowering Afghans in the depth of a crisis

With lapis-blue skies and crisp mountain air sweeping through its valleys and plains, winter is coming to Afghanistan. By all accounts, it may be even worse than last year’s, when a heroic effort by the UN and a broad constellation of implementing partners delivered emergency food assistance to over 23 million people and maintained critical health infrastructure in all 34 provinces. That narrowly avoided the mass famine and starvation that many had predicted. It is one of the largest humanitarian relief efforts ever mounted.

To say that this effort was not nearly enough, is not to criticise its achievement, which was vital and must be congratulated. In the desire to do better for Afghanistan, it is sometimes easy to lose sight of the magnitude of the humanitarian crisis it has faced. The economic collapse has been unprecedented: the UN predicts that 97 per cent of the country will slide into extreme poverty this year – some 34 million people – an increase of almost 50 per cent since August 2021. 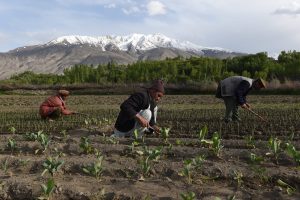 Farming under the mountains of Ishkashim. Credit: Nance Ackerman

Although the humanitarian effort has saved many millions of lives, it cannot rescue the country from the economic catastrophe and its long-term impacts, putting Afghanistan at continued risk. As UNDP says, a decade of Afghan economic growth has been wiped out in just 12 months.

And yet – once again – Afghans have showed their resilience. As the EU’s deputy head of Mission, Raffaella Iodice, noted at the UNHRC executive committee meetings in October, Afghans have achieved so much in the past year. They deserve our admiration, and our support.

The economic collapse has been unprecedented: the UN predicts that 97 per cent of the country will slide into extreme poverty this year.

It has become a cliché to speak of Afghan resilience, so deep and lasting have been the crises faced since 1979. Their dogged determination to survive has been honed over decades and regularly renewed, but in that spirit of resilience lies the country’s future.

August 2021 was a traumatic political break for many, but it merely intensified the consequences of an extreme environmental and human predicament that has been growing for several years. Afghanistan has suffered from debilitating droughts since 2010, with rare years of respite. This year’s affected 25 of 34 provinces. With planting seasons already disrupted by the government’s collapse, even those yields were down 20 per cent. In recent years, more people have been displaced by climate stress than by conflict.

Covid has amplified other trends. Health systems, already largely inadequate, have struggled with the facilities, equipment, and material needed. Rampant malnutrition magnifies the effects of respiratory viruses, putting vulnerable groups at even greater risk. Education has been fundamentally disrupted: most Afghan children have attended just three months of school in the past two years. For girls of secondary age, that will soon be three. 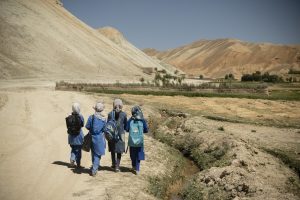 Most Afghan children have attended just three months of school in the past two years.

Although security has improved since the de facto authorities took Kabul, the fundamental drivers of fragility remain and are intensifying: deep and deepening poverty; greater competition for scarce resources like water, land, and livestock; ongoing ethnic and tribal tension. Underpinning and exacerbating all of this is the additional stress put on people and places by climate change through environmental disruption and natural disasters. No matter what authorities are in place, these daunting challenges will remain.

But there is another constant in Afghan society that we should not underestimate – and must not neglect. The Afghan people. It is more important than ever that we invest in them and their capacity to find their own answers to the challenges facing them and their communities.

For almost three decades, the Aga Khan Foundation has been helping Afghan communities come together to address their own priorities. Beginning in the 1990s, we started our work providing humanitarian relief and emergency education in some of the most isolated areas on the Afghan-Tajik border, in Kunduz, Takhar, and Badakshan. Very quickly, we established longer-range development programmes, understanding that we must be a permanent partner for Afghan progress. That led us to build large programmes in health and education, agriculture and market development, financial inclusion and empowerment, small infrastructure and natural resource management. At the root of everything we do – now directly in eight provinces, and with partners in 14 – are community groups of all kinds: savings groups (primarily women’s), water users’ associations, farmer groups, community development councils. All these are themselves interwoven in dialogue with more traditional community structures, such as shuras and networks of elders. 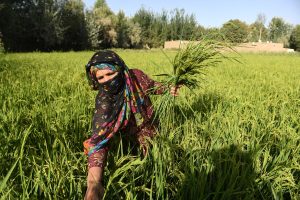 A farmer works the fields in Takhar. Credit: Farzana Wahidy

In the past two decades, we worked with the international community and alongside dozens of other partners to develop these community institutions in a deliberate, strategic way. Well-known programmes included the National Solidarity Programme and the Citizen’s Charter, but many others drew on and strengthened these local structures.

At the root of everything we do are community groups of all kinds.

These community institutions, anchored in local areas, still exist. They form a strategic foundation for deep, sub-national work that could continue to transform Afghan lives and empower people.

Since August, AKF has remained in close contact with these communities in the 74 districts where we are present, working directly with and through them to ensure that local Afghans have a voice in the humanitarian choices affecting them. They are also playing an active role delivering assistance to their neighbours and families, strengthening their solidarity against many shocks.

A wider response from the international community

It is vital that the international community does much, much more work through them in order to strengthen these platforms for Afghan engagement.

Having enumerated the many challenges and the fundamental drivers of Afghanistan’s fragility, it should be evident that a narrow response focused entirely on humanitarian assistance cannot be maintained. We began this article by reminding readers that winter is coming. The next, even larger, UN appeal for humanitarian aid will soon follow – inaugurating the first rotation in what threatens to become a permanent and endemic cycle of humanitarian emergencies and appeals. Afghanistan deserves better than this – and it has the capacity to react differently, whatever authorities sit in Kabul. 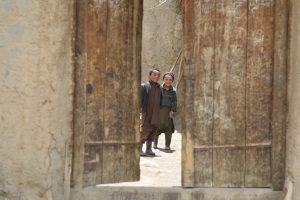 Boys at play in their Afghan village. Credit Nance Ackerman

To do this, the international community must begin thinking beyond six-month periods, beyond the fear of immediate famines, to address the needs of the next winter, now. This would mean much more attention to livelihoods, helping people and families generate incomes and purchasing power; and more allocation to agricultural livelihoods in particular – these are especially critical in a country where 70 per cent of households are in rural areas. It would also require more attention to seed supplies and delivery; to the health and safety of livestock, on which so many depend; and to helping small businesses and entrepreneurs navigate Afghanistan’s trifecta: the sanctions-banking-liquidity crisis, which has collapsed the economy.

While the challenges to Afghanistan’s banks, its central bank, and its currency are each complicated and controversial, there is a need for greater urgency in addressing them – from all sides. Only a functioning economy can pull Afghanistan out of a permanent cycle of crisis and dependence.

Afghans have shown themselves capable over two decades (and more). We must do more to restore the tools they need to make their own way.