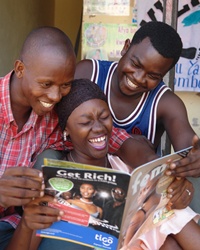 Femina HIP, the citizen media initiative, started as a small project in Tanzania in 1999. By 2010, Femina had become the country’s biggest ‘citizen’ media platform, and a significant shaper of contemporary culture and values, reaching 10 million (out of 40 million) people in Tanzania, with over 800 distribution partnerships reaching across the country.

The original aim was to initiate popular education about healthy lifestyles, embracing sexual and reproductive health and rights as well as HIV transmission. The focus was on young people and the approach was ‘entertainment education’ – the drama of everyday life, good feature journalism, popular columnists, letters from readers, participatory production of photo novels, all enabling people to share their own experience. It also made use of a variety of media vehicles. It started out with print, but TV, radio and internet were soon included, as were the new social media and SMS text messaging. The approach was an instant hit – no other media resonated with people’s lifestyle challenges.

Although we started by focusing on healthy lifestyles, the agenda has gradually expanded as regular feedback from our audience has revealed a desire for a greater focus on issues of income generation and employment. Every year, a million young people in Tanzania enter a labour market where few will find employment. There is also a startling absence of an entrepreneurial mentality and the skills to help young people become self-employed.

Femina has, as a consequence, embarked on a ‘combination prevention agenda’. Young people need to stay healthy, but they also need entrepreneurial skills and financial education, and exposure to business ideas and opportunities. The entry point in a time of climate change is via sustainable development models, in other words green jobs, clean energy and better natural resource management. One way of moving into new opportunities has been through strategic partnerships with other organizations. In 2009, Femina ran a ‘solar light’ campaign, creating awareness among young people about solar energy entrepreneurship and ensuring access by working in partnership with a company that produces affordable solar lamps. Connecting young people to the supply chain and encouraging them to get involved in the distribution as solar entrepreneurs is a challenge in which we’ve found mass media to be indispensable.

Femina has harnessed the opportunity to go to scale and become the largest citizen media organization in the country, educating people on vital social issues. A combination of factors – or ‘pathways to scale’ – have made this possible:

The Femina HIP experience over the past decade has proved that it is possible to create a civil society-driven media platform and to take it to scale. Communication and education initiatives are many in Tanzania but often small-scale, operating in relative isolation and with a limited time line. There has been little effort to coordinate and create common media platforms. A media platform that enables partners to come together on a cost-sharing basis to get their messages across has huge potential to further enhance communication for social change and systems change generally, and a large pool of connected agendas as diverse as entrepreneurship, deforestation, access to renewable energy and financial literacy skills.