The public health landscape today looks unquestionably different from how it did in the late 1990s when the Gates Foundation strode on to the field. To its credit, the foundation has brought about a resurgence of interest in global health issues at a time when the cause was running low on energy and funds. Before Gates, global health funding covered little more than HIV and emerging infectious diseases – a bare shadow of the World Health Organization’s (WHO) Health for All[1] vision of the 1970s. But Gates’ support for global health also raises questions: is it pushing us too much towards simple technological responses to multifaceted problems? With its influence so far-reaching, who will be willing and able to offer objective feedback?

The influx of serious new money (as opposed to the stirring of existing donor pots that often takes place at international conferences) and attention from the Gates Foundation have revitalized the field as a whole. Today, the foundation’s annual spending on global public health – about $1.8 billion – is larger than the WHO’s yearly budget. Donors have started thinking about global health as a broad and important discipline once again. With the launch of Gates’ Grand Challenges Initiative in 2003, some of the world’s best scientific minds turned their efforts to solving the problems of the world’s poorest.

Gates has devoted hundreds of millions of dollars to proven, effective technologies – vaccines and medicines – delivered through partners like GAVI (Global Alliance for Vaccines and Immunization), the Measles Initiative, and the Global Fund to Fight AIDS, Tuberculosis and Malaria. According to the Gates Foundation, GAVI alone has vaccinated more than 300 million children.

The Gates Foundation has been able to achieve a great deal in a short time precisely because it is unencumbered by many of the typical constraints of the aid bureaucracies. Global health is prone to decision paralysis: since there is always more research to be done and too little money to go around, donors can get stuck trying to choose the interventions with the most impact per dollar. The Gates Foundation has shown its ability to make rapid decisions and move large amounts of money quickly – to fight polio outbreaks, for example. In this way, Gates provides de facto leadership, forcing other donors to either go along with its strategy or figure out the alternative. It’s a valuable catalyst to a slow-moving community. 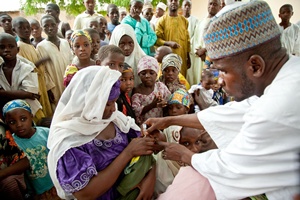 Can the world’s problems be solved with technology?

Another clear Gates Foundation strength is its willingness to fund programmes that others can’t or won’t. While USAID is forced by the Congressional funding system to think, at most, in terms of a 3 to 5 year project life-cycle, Gates has the freedom and the funds to invest in a high-risk, high-reward search for a vaccine that may be decades from widespread use. While political and diplomatic goals dictate that most bilateral aid be spread thinly across countries and sectors, Gates can focus on what it thinks it does best.

Gates has a clear preference for technological solutions over those that address systemic or social ills. And, strange as it may sound, too much emphasis on technological solutions lets world leaders off the hook. It allows them to avoid grappling with corruption, human rights abuses, war, geopolitical calculation and social inequality as causes of global poverty and human suffering. It’s easier to develop a diarrhoea vaccine than to get the faeces out of the water supply, but clean water provides benefits far beyond diarrhoea prevention.

Not everyone believes that the world’s biggest development problems can be solved with technology, no matter how smart the scientist or how large the investment. Although the foundation has evolved over the years, the first Grand Challenges call for ideas explicitly excluded problems of ‘poverty, access to health interventions, and delivery systems’. In a 2005 essay in the Lancet, University of Toronto public health professor Anne-Emanuelle Birn diagnosed the foundation’s signature initiative as having a ‘narrowly conceived understanding of health as the product of technical interventions divorced from economic, social and political contexts’.

The singleness of focus might also lead up blind alleys. In 2007, the Gates Foundation made eradicating malaria a top funding priority, and persuaded the WHO and other large donors to follow their lead. But if malaria can’t be eradicated and must instead be managed or contained, as many scientists believe, then four years and hundreds of millions of dollars may have gone towards answering the wrong research question.

Weighing the pros and the cons

Any actor as large as the Gates Foundation is going to have a distorting effect on the field. It means new money and enthusiasm for global health, but it is also pushing us towards simple technological responses to multifaceted problems that may not have that kind of solution. Do the benefits of the Gates money outweigh the negatives?

It’s a difficult question to answer and it may be getting harder. The single largest line item in the foundation’s global health budget is not HIV/AIDS, malaria or polio but policy and advocacy. Gates funds so many players, a common joke runs that it’s easier to list the organizations that Gates doesn’t support. Among the grantees is a growing list of media outlets including the Guardian newspaper (UK), ABC, PBS and the BBC – all to underwrite coverage of global health issues. While these grants all came with assurances of editorial independence, it’s hard to believe that such partnerships won’t influence the nature of the coverage in some way. One clear indication of how the Gates Foundation seeks to influence the public discourse is their advocacy effort Living Proof – a ‘showcase’ of success stories and educational materials about global health progress made with US official aid.

Who is to question whether the influence is undue?

It is not inconceivable that you might find yourself some day reading a story about a Gates-funded health project, written up in a newspaper that gets its health coverage underwritten by Gates, reported by a journalist who attended a Gates-funded journalism training programme, citing data collected and analysed by scientists with grants from Gates.

What happens when we need to move beyond the success stories? If the Gates Foundation influences governments, NGOs and the media on global health, who will be able to offer objective feedback on its goals, practices and impact? If expensive polio and malaria eradication efforts, pursued not just by Gates but by the entire global health community at Gates’ urging, fail, to whom will Gates be accountable for that failure? Currently the foundation is ultimately accountable for its success or failure only to the four decision-makers on its board.

As a private foundation, Gates is obliged only to report its high-level figures to the US government to retain its tax-exempt status. Of course, the foundation does much more than that. There is a website with annual reports and a letter from Bill, a database with some basic information on individual grants, well-produced videos and even a new blog, gatesnotes.com. But much of this information falls more into the category of advocacy or public relations.  Meanwhile, the foundation seems more reticent about the deeper questions. How does it decide which strategies to pursue? How does it measure their success? And how does it respond to and learn from failure?

Bill Gates himself has made the argument for transparency and greater accountability for the foundation: ‘[The] lack of a natural feedback loop [in philanthropy] means that we as a foundation have to be even more careful in picking our goals and being honest with ourselves when we are not achiev¬ing them.’

The foundation’s current polio eradication efforts provide a lesson in why truly objective feedback, evaluation and accountability are so necessary. The push to finally eradicate polio is running up against the limits of a technological approach. While advances in the last 20 years have brought us tantalizingly close to eradication of this disease, it remains endemic to four countries: Nigeria, Afghanistan, Pakistan and India. With the partial exception of India, this list of troubled countries is a humbling reminder that ongoing violence, dysfunctional health systems and failures of leadership may prove more intractable obstacles to stamping out the disease than the lack of money or vaccines.

Endowed with large resources and influence, concerned with accomplishing good for all, and able to exert power – if this sounds like just what global health needs, it also sounds to a worrying degree like a dictator, albeit a benevolent one. Even the best-intentioned of dictators may find themselves insulated from the objective feedback they need to learn from their mistakes and make essential course corrections. For now, we know that Gates has done a lot of good in revitalizing public heath, and there’s no conclusive evidence that they’ve done any harm. But in a possible future where a significant majority of voices involved with public health either receive Gates money or would like to, how will we know?

1 Health for All was a slogan adopted by WHO in the 1970s, when it became the basis for the WHO’s primary health care strategy to promote health, human dignity and enhanced quality of life.