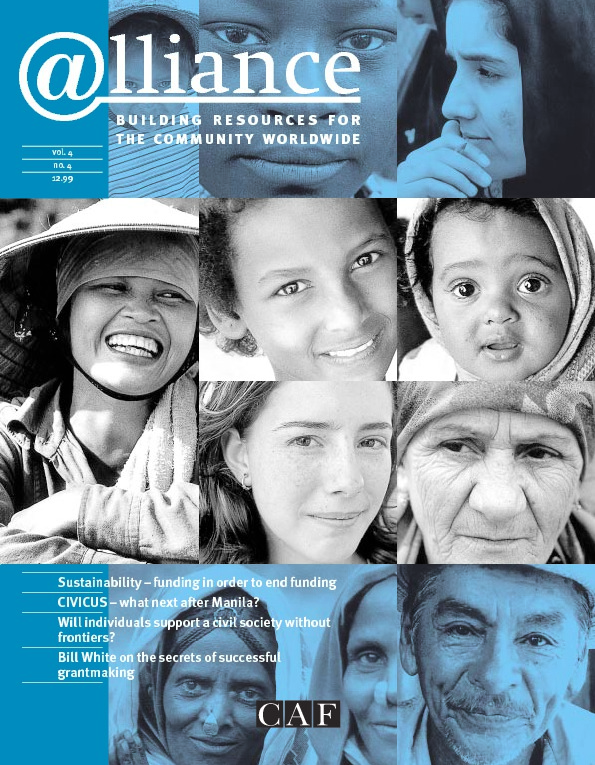 Recently, I heard a senior USAID grantmaker, addressing an audience of African NGO leaders, stress that he was only interested in funding ‘legitimate NGOs’. He meant something more than ‘formal legitimacy’, ie legitimacy granted by the state through a registration process, but he did not go on to explain.

Several articles in this issue of Alliance focus on the issue of helping NGOs achieve financial sustainability. But this can be too narrow a focus. The question ‘What is a legitimate NGO?’ is an important one for grantmakers and development practitioners. We all want to work with honest, properly established organizations, but we should also be concerned with wider aspects of legitimacy, for it is only the truly legitimate organizations that will prove sustainable in the long term.

As international grantmakers, the difficulty of reaching out directly to small community-based organizations (leave aside the patronizing implication that there aren’t any local intermediaries capable of so doing) means that we tend to work through larger, formally constituted NGOs.

In many parts of the world these NGOs are finding life increasingly difficult. International flows of aid, if not shrinking in total, are certainly changing in direction and type. Although some funders (such as the World Bank) are channelling more money through NGOs, they are doing so often on a competitive tendering basis; very few NGOs in countries such as Ghana, India or Russia have the capacity to mount a successful bid. At the same time, many international NGOs are reducing the number of Southern partners with which they work. In this context, the demands on grantmakers who do still fund can only grow, making it ever more essential to identify the right organizations to support.

If NGOs around the world are struggling to cope with this situation, we should pause a while before feeling too much sympathy. The immense scale of what Lester Salamon has famously termed the ‘associational revolution’ has negative as well as positive implications. In many poorer countries, the sudden rush of funds for NGOs (in the 1980s particularly) encouraged large numbers of people to set up their own NGO. These tended to be without a community base or a particular set of specialist skills – often termed ‘BRINGOs’ (Briefcase NGOs, so-called because the NGO often consisted of little more than someone with a case full of proposals).

The BRINGOs are the extreme, but between them and the truly effective NGO are a host (possibly the majority) of NGOs that are struggling to develop or understand their new roles, struggling to survive. This is not simply a matter of funds, it is a struggle to establish legitimacy. While there are several ways of interpreting legitimacy, I shall emphasise two vital components: identity and constituency.

NGOs face not only a funding crisis but a crisis of identity. Official registration does not establish identity. This comes from being clear about why an organization exists, what it is there to do, how it differs from others, where it fits. Unfortunately, it is increasingly difficult to be clear about these questions. The distinction between government, private sector and non-profit sector, if it ever was clear, is increasingly blurred. NGOs are encouraged by government to take up contracts for delivering services that have traditionally been seen as the preserve of the state. Private companies are awarded ‘grants’ from funding agencies to implement development projects. Formulations of identity around concepts such as ‘non-profit-distributing’ seem meaningless when the NGO’s directors receive the same salaries and benefits as their private sector counterparts. And when a local NGO’s ‘consultancy’ fees set out in a funding bid outstrip those of Price Waterhouse, should we be changing our perception of the NGO?

In the past, many NGOs have tried to be generalists, taking project money for any purpose. Grantmakers have often encouraged this by imposing their own agenda, effectively forcing NGOs to tailor their programmes to meet the needs of funders. This undermines the evolution of a strong, effective NGO subsector with clear identity. Grantmakers can do much to assist NGOs in clarifying their identity, encouraging the development of specialist skills and knowledge. In so doing, they improve the impact of their own programmes.

The most important constituency for an NGO should be the group of people with whom or for whom it works. For external funders this is likely to be the main area of interest. However, even the most generous and supportive funder is not around for ever, so there has been increasing attention given to developing a second type of constituency – contributing supporters.

We should not, however, get carried away with the idea of NGOs fundraising in low and middle income countries. Nor should we be too quick to draw a distinction between ‘end-users’ and supporters. These two constituencies can be one and the same – a self-help group and a campaigning body are examples where this is clearly the case. But even a more service-delivery type of NGO ought to be seeking the active support and involvement of the people to whom it is delivering the service. This is not to suggest that people ought to be paying for services (though this is certainly possible and increasingly necessary); rather, it is to suggest that NGOs and their programmes will be more successful, and more sustainable, if they encourage full participation.

In too many cases NGOs pay lip-service to the ideal of participation, concerning themselves more with building their portfolio of projects and their asset base, and satisfying the very limited constituency of external funders. We cannot assume that an NGO is closely connected with or responsive to local people. We should look for examples of participation in planning, regular contact between NGO staff and local groups, opportunities for local groups to influence the priorities and policies of NGOs. It is not necessarily realistic to expect NGOs to be representative (though some are), but we should expect them to be responsive. If an NGO is not responsive to the needs and priorities of the people for whom it says it works, how can it be said to be legitimate?

Accountability is also relevant here. We should expect an NGO to be accountable to its constituencies in the sense of being answerable to them for what it does. This is much more than simply being transparent about its operations and finances (though transparency should be encouraged). Accountability is a key component of legitimacy because it grounds the responsive relationship between NGO and constituency. External funders should not simply be concerned with narrow accountability; we should challenge our NGO partners to be accountable to all their stakeholders.

A local base of donors

Building up a local support base of donors is extremely difficult for many NGOs; it may be impossible. The attempt to do so may also be undesirable in itself. The emphasis over the last ten years or so on building the capacity of NGOs to raise money in their own communities is a response to changes in international funding as well as a recognition of the need for financial sustainability. However, the emphasis in building capacity should be less on fundraising techniques and more on building relationships. Sympathy cultures encouraged by professional fundraising in OECD countries are now reaching their limit; in many cases, voluntary contributions to charity are dropping. At the very least, more and more investment is needed simply to retain current levels. Surely this is not what we would wish to encourage in India, Ghana, Russia or China?

Investing in the capacity of NGOs to build a constituency of support means ensuring that the NGO is genuinely understanding and responding to need. It means finding ways to build solidarity links between the NGO as ‘representative’ of a cause or need and a constituency of support. This support could be local mutual aid, regular contributions from engaged ‘donors’, or international funding coming through solidarity with a cause. What we must avoid is establishing ‘fundraising’ or ‘income generation’ as the panacea.

So what is a legitimate NGO?

Had the occasion been different, I might have asked the man from USAID how he would describe a legitimate NGO. But perhaps what we need to do is rephrase the question, and ask instead: What kind of NGO do we as donors wish to support? One that is clear what it’s doing and responsive to the people it’s working for, or one that is adept at adapting itself to the vagaries of funders and fashions? The former type is surely both more legitimate and more likely to be sustainable in the long term.

Andrew Kingman is Director, International Development, at CAF. He can be contacted via email at akingman@caf.charitynet.org

Getting a world alliance started – my four years at CIVICUS