The Philippines – Self-regulation on trial 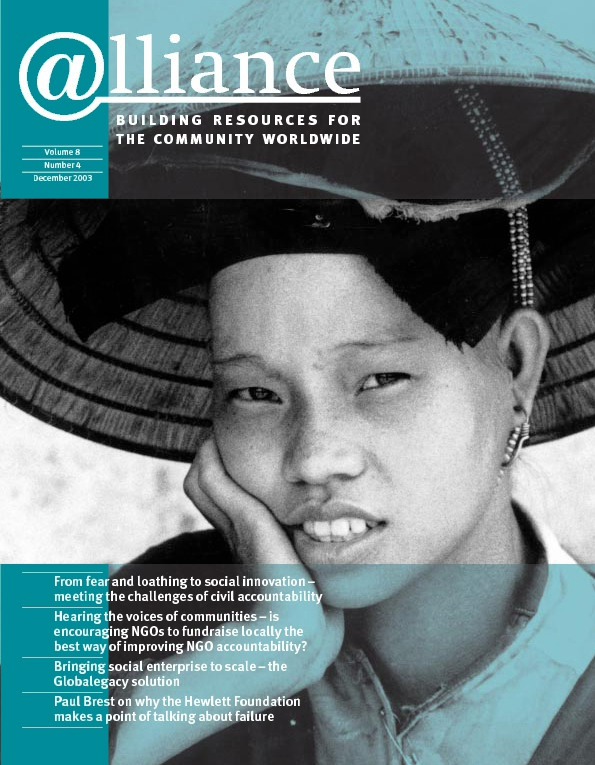 The Philippine Council for NGO Certification (PCNC) provides the world’s first example of government delegating to a non-profit organization authority to certify NGOs for tax benefit purposes. Established in late 1998, PCNC has now evaluated 445 NGOs.[1] So far all parties seem satisfied with the process, but some questions remain. In particular, given that there are an estimated 70,000 NGOs in the Philippines, can PCNC scale up its activity significantly?

Before 1995, all NGOs registered with the Securities and Exchange Commission and the Bureau of Internal Revenue (BIR) automatically had ‘donee institution status’.[2] In 1995, a revenue-hungry government threatened to withdraw these tax privileges, alleging that it was impossible to distinguish legitimate NGOs from unproductive tax shelters. Faced with NGO protests, the Department of Finance challenged the NGO community to put up a mechanism to determine which NGOs deserve donee institution status. PCNC is the mechanism that emerged.

But PCNC itself sees its role in somewhat broader terms. ‘Certification by PCNC shall also be a “seal of good housekeeping” that funding partners and prospective donors may consider in their choice of organizations to support,’ says its website.

The goal of PCNC is not to regulate the kind of activities NGOs engage in. Rather, it is to ensure that NGOs meet minimum criteria for programme and financial management, governance and accountability. It looks at NGOs under six headings: Vision, Mission, Goals; Governance; Administration; Programme Operations (including monitoring and evaluation systems); Financial Management; Networking. Under Programme Operations, for example, certification could be withheld if there is no clear planning process or no monitoring and evaluation system, if there are not enough staff or skills necessary to implement programme/project activities, or if there is no system for sourcing and allocation of funds.

All applicants for certification go through a two-step process. First, they submit a written application containing basic information about the structure of the organization, its goals, its activities and its finances. If the organization seems to be prima facie eligible for certification, there is a site visit lasting two days by three evaluators, usually two volunteer evaluators and one PCNC staff person. The evaluators make recommendations to the PCNC Board of Directors as to whether an organization should finally be certified. If an NGO fails to meet certain requirements, it can reapply once these have been met.

Issues for PCNC
How widely is it accepted?
If PCNC is ultimately to play the part assigned to it, it will need to meet government requirements, be accepted by NGOs themselves, and be seen as a credible, independent body by the wider public. So far it does seem to be succeeding on all three fronts. The government, in the form of the Bureau of Internal Revenue, seems more than satisfied with its delegation of power to PCNC – not surprisingly, since PCNC has taken on some of its work, at no cost to government and apparently satisfactorily.

Nor are there any signs that NGOs or society at large are dissatisfied – though concerns have been raised as to whether the certification requirements discriminate against smaller NGOs.[3] CODE-NGO (Caucus of Development NGOs), the Philippines’ biggest network of NGO networks, has committed itself to ensuring that all its 2,500 member NGOs are PCNC-certified within ten years.

Can activity be scaled up?
How much PCNC’s activity can be scaled up will depend on how financially sustainable the organization is and whether the supply of volunteer evaluators is sufficient. So far, 1,147 volunteer evaluators have been trained. They are provided by certified NGOs, which become PCNC members and as such accept an obligation to provide evaluators. One issue here is whether it will be feasible for small NGOs to meet this requirement. In any case, evaluators need to be trained, which is a cost issue for PCNC.

Is this a sustainable mechanism?
At present all NGOs are charged the same fee for certification. This standard fee covers the average cost of certifying an NGO within Metro Manila, with a little to spare towards PCNC overheads, but certainly not the cost for an NGO in a distant province.[4] With no prospect of government contributing towards its costs, PCNC is now considering grading charges, keeping the present level for smaller organizations but putting up charges for larger ones. Re-certification should also bring in some money towards core costs. Offering training in governance for boards of members is another potential earner.

Why has CODE-NGO, with 11 networks with 2,500 members between them and its own code of conduct, decided to promote PCNC certification among its members rather focusing on enforcement of its own code? According to Executive Director Joel Pagsanghan, it is largely a matter of cost. Part of CODE-NGO’s voluntary code is covered by PCNC’s certification requirements, and it is less expensive to encourage NGOs to get certified than to attempt to enforce its own code.

Interestingly, the origins of CODE-NGO’s code of conduct are rather similar to the reasons for founding PCNC: the proliferation of ‘pseudo NGOs’ and the need to distinguish them from genuine ones. CODE sees its role as upholding the image of NGOs in the Philippines. Why is Pagsanghan so sure that PCNC certification will be a good thing for NGOs? ‘We have a Code of Conduct and we ought to implement it.’ By ensuring that its members become PCNC-certified, CODE will also ensure compliance with at least part of its code.

What about that part of its code that’s not covered by PCNC, consisting of ‘Development Principles’ and ‘Goals for Philippine Development’? Will CODE attempt to enforce that too? While promoting PCNC certification is a systematic and proactive activity, monitoring the other parts of the code by the National Secretariat and the Commission on Internal Reform Initiatives will be a reactive matter, action being taken in response to reported violations. CODE deals with complaints against individual organizations only if the network fails to deal with them itself.

How much this combination of official certifying agency and voluntary codes will meet the governance and accountability needs of the Philippine NGO sector will be of particular interest in Pakistan, where the Pakistan Centre for Philanthropy is in the process of developing a similar scheme.

1 Of these 445 organizations, 357 were certified, 52 were not certified, and the rest have deferred certification as they still have to comply with urgent requirements.

2 This gave tax deductibility on up to 10 per cent of taxable income derived from trade or business; no tax reliefs have ever been available on salaried income.

3 Others maintain that going through the certification process and being pushed to meet PCNC requirements is very beneficial for smaller NGOs. The cost of certification may be a barrier for small NGOs, but I didn’t hear this discussed as an issue at meetings with PCNC and CODE-NGO.

4 PCNC charges NGOs 10,000 pesos to certify and then 2,000 pesos per year. Re-certification after one, three or five years costs the same as the initial process but inevitably takes less time.

For information on non-profit self-regulation mechanisms in 17 countries and regions of Asia and the Pacific, see Mark Sidel, Trends in Nonprofit Self-Regulation in the Asia Pacific Region, commissioned for the recent APPC conference.