Between East and West

Time for US foundations to engage with the Arab region

The role of European foundations in the Arab region

‘I am in my eighties now and I know I will not be remembered for what wealth I had but for the work I did for my community.’

The A M Qattan Foundation (AMQF) has a reputation for high-quality programmes in cultural and educational development, for children, young artists and teachers. Sixteen years after it was founded in the UK and 11 years since it started to work in Palestine, the founder, Abdel Mohsin Al-Qattan, has taken a historic step, not only for his foundation but for the Arab region, by allocating 25 per cent of his wealth to set up a trust to ensure the sustainability of AMQF. What has prompted this bold move? Will it create a snowball effect in the Arab region? Atallah Kuttab of the Welfare Association asked him about this and about the development of his philanthropy.

You have been involved in philanthropy for many years, indeed all through your life. How has that evolved over time?

In 1948, when I was a first-year student at the American University of Beirut, my family was forced to flee from my home towns of Lod and Jaffa (now in Israel). We lost our land, our home and our money. I realized then that the only asset that cannot be taken away is education, and I am thankful to my family that they gave me a good education. This, coupled with the opportunity to work in Kuwait in the early 1950s, enabled me to improve my financial situation.

The values I grew up with, which are rooted in Islam and other religions, are compassion and supporting the needy in one’s own society according to one’s means. My first priority was to help finance the education of my immediate relatives, children and then grandchildren.

Later on, I started thinking beyond my immediate family and extended my concern to my fellow Palestinians, again with the emphasis on education and culture. Without cultural depth, education will lead to a lower standard of development. 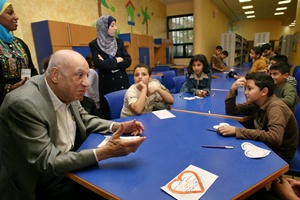 This led to my supporting capable and talented young Palestinians with limited financial resources to acquire quality education in various fields, but primarily arts and culture. Many have excelled, which is a source of pride to me. This led to numerous scholarships being granted by us, but not in a systematic way. (The photo right shows A M Qattan during his visit to the Qattan Center for the Child in Gaza in May 2010.)

Later, in the early 1990s, AMQF was founded and received support from the family trust that I had established for my philanthropic activities.

What triggered your decision to establish a separate trust for your foundation now?

Like everything else, ideas develop and keep improving. Working and living in Europe, I was exposed to the various means that could be used to ensure the sustainability of the social investment I had started. And I asked myself: what if my family decides to change the focus of our philanthropy work? What if the family trust does not produce enough income to meet commitments, as happened in the last financial crisis?

So I decided that the best solution was to create a buffer and set up an independent trust for AMQF. This will ensure its independence, its commitment to education and culture for Palestinians, and its survival for years to come. In order to secure this, my will stipulates that 25 per cent of my wealth will revert to the AMQF Trust on my death.

I thought that Islam did not permit the making of a will?

To favour one legal heir over another is not allowed, but Islam allows one third of one’s wealth to be allocated (according to a written will) for social protection/social justice projects and to ensure the well-being of the people who work for you. So 25 per cent of my wealth will go to AMQF. I have also made arrangements for my old employees who do not benefit from a social security safety net in their countries of retirement.

Does your family support this?

My wife has influenced my giving and she is fully behind all my actions. In fact, she can take the credit for instilling in our children compassion and support for our Palestinian community. My wife and children are as enthusiastic as I am about the idea. It gives me pride, as it would any father, to see my children holding such strong values for the benefit of humanity.

Are there any further steps needed to move AMQF away from being a family foundation?

This is the natural step forward if I want to be sincere in what I advocate. AMQF, over the years, has almost achieved its fundamental objective of becoming a civil society institution. This means it enjoys complete independence in its programmes, and is transparent in its decision-making and democratic in its practices. Also, it has a close and judicious relationship with the community to whose interests and concerns it is organically – but critically – committed.

I stress the word ‘almost’ because AMQF is still connected to the family and to me (since it holds my name). The time has come to take the next step from being a family-run foundation to being one in which the community plays a more active role. We have discussed this in strategic planning sessions over the last two years. One of the key steps will involve the expansion of membership of the board of trustees to include qualified and specialized individuals who will support and enrich the foundation’s programmes and strategies through their expertise and professionalism, and help cement its relationship with both the Palestinian and the wider Arab and international communities.

Extracting the foundation from the domain of the family and its limitations may also reflect a similar desire among the people in the region, particularly the young, to strengthen the spirit of democratic and collective action in our culture, allowing it to move away from the current system of family and clan dependency. If this is so, I believe that AMQF will be helping to prompt yet another difficult but pioneering step.

I am in my eighties now and I know I will not be remembered for what wealth I had but for the work I did for my community. In that sense, what I have done and continue to do in my philanthropic work, whether with AMQF or over the years with the Welfare Association,[1] brings me peace of mind and fulfilment. I have lived comfortably, life has been generous to me and my family, and I have tried to live modestly and with compassion for those around me.

It is always important for Palestinians to remember that our aspirations are closely linked to the rest of the Arab region. That’s why I encouraged AMQF to join and become active in the founding of the Arab Foundations Forum. I hope this will encourage all people with wealth, in the Arab region and globally, to follow suit in including in their wills provision for the institutions they establish or for existing foundations.

Atallah Kuttab is director general of the Welfare Association and founder of the Arab Foundations Forum. Email kuttaba@awelfare.org.jo