The Atlantic Philanthropies is coming to the end of its life as a grantmaking foundation. It is due to complete its grantmaking by 2016 and close its doors by 2020 – the largest foundation ever to spend out. Caroline Hartnell talked to Atlantic president and CEO Christopher Oechsli about why its founder, Chuck Feeney, adopted the limited-life approach and why he doesn’t favour the term ‘spend out’; where Atlantic’s priorities will lie for the remainder of its existence; and what its influence has been.

In your recent annual letter, ‘Journey to Lasting Impact’, you say that funding in your remaining years will focus on areas where you see the best opportunities to make the greatest impact. What are these areas?

We have four core programmes – Ageing, Children & Youth, Reconciliation & Human Rights and Population Health – and the Founding Chairman’s programme. Our initiatives going forward draw from our experience with these and from the countries where we’ve been engaged for an extended period. As we conclude our work, we also want to maintain some flexibility to seize opportunities, consistent with our Founding Chairman’s approach. The most recent example of this is a major investment in Cornell University’s Applied Sciences NYC Initiative in partnership with New York City.

Throughout our core programmes, we have zeroed in on several themes. In the Republic of Ireland, for example, we are working with government to try to develop and embed evidence-based practices with a community care emphasis in the areas of dementia and disability. 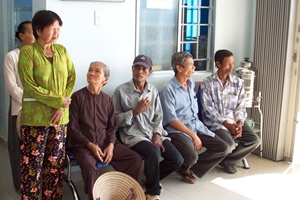 In respect of children, we support prevention and early intervention practices in both the Republic of Ireland and Northern Ireland. And in the US, we are working with schools, communities and service providers to improve educational, social and economic outcomes for students and their families, especially those in disadvantaged communities. This includes such things as promoting the efficiency of school-based health clinics and reforming school discipline practices, which particularly affect children of colour in disproportionate ways. In Vietnam and South Africa, we are concluding our grantmaking but not our work. We are trying to influence the system to emphasize primary healthcare as a cost-effective and outcome-effective way of allocating limited health resources (picture shows a commune health centre in Vietnam).

Is the course set or, as you get closer to the end of 2016, are there going to be changes in those programmes?

Over the last 10 to 12 years we have continually refined our objectives within the general areas. As we complete our grantmaking we will have less time and resources to change those objectives and we will be staying principally in areas where we have experience and where we can leverage that experience to best effect. That said, we will be attentive to opportunity in areas related to what we do. Our resources restrain us from going too far afield from what we know best, but we don’t want to be rigid.

The trick is to be aware of opportunities within those broad spaces that would maximize our experience even as we conclude our work. We’re in the process now of framing what our approach to those kinds of opportunities would be. Let me give you one example. There is a Brussels-based organization called The Net that is seeking to develop socially accountable health education and ways to strengthen delivery of community-based primary care. Those aims are consistent with our own experience in Vietnam and South Africa, but The Net operates across geographic boundaries. By supporting it, we see ways of leveraging what we have done in particular countries to provide some wider value.

The other thing to remember is the possibility of having influence and impact beyond the grantmaking. I think there is a lot of work we can do that doesn’t necessarily involve grantmaking so much as communicating, establishing appropriate forums, engaging policymakers and influential players in sharing what our experience and the experience of our grantees have been. In Vietnam and South Africa, for example, we have worked with governments to try to develop primary healthcare as a priority. In Northern Ireland, we’ve supported shared education, and we believe the experience of our grantees in that area has relevance in other countries where there are cultural or racial conflicts. I think we are increasingly moving in the direction of trying to share what we’ve learned with those who can most benefit from it.

Will you be making legacy grants to some of your main grantees or are there other ways in which you’re going to try and ensure that the work you’ve been doing can carry on?

One challenge of sustainability is about the work having traction and being visible to other donors and policymakers. So instead of large legacy grants, we prefer to make matching grants as a way to bring other funders into the effort and to encourage grantees to look for other sources of funding rather than relying on Atlantic for a large amount now only to face the sustainability issue further down the road. Also you can swamp grantees by making too large a grant and actually have a counter-productive effect by crowding out other partners and resources.

Finally, just as we feel that we can do a certain number of things effectively in a short period of time, it may be that some non-profits would do well to have a limited life if they are project-oriented or focused on specific outcomes.

Do you have grantees who came into existence or perhaps expanded their organizations to work with you on programmes and who would be happy to see themselves with a limited life?

I would say they are exceptional. But we want to convey our experience that a limited life enables you to focus on something and make a difference sooner rather than later, and in some instances some organizations may be in that position themselves.

On the sustainability issue, in some areas we are involved with several grantees working in closely related fields. Our departure is likely to limit the sustainability of all of them and they need to consider together how they can work to achieve the shared objectives. That could mean some form of joint effort, from shared back office resources to partnership, if not merger, in order for them to conclude the work.

We are in fact supporting some of our grantees to explore this. We sit down with them and discuss the kind of financial and other planning they are doing prior to our departure and ask them if they have thought whether it would make sense to work together, even to reorganize to achieve what are similar goals.

Are you making any special preparations for spend down in Ireland? With the One Foundation and Atlantic both about to close, there will be a huge gap in funding there.

Atlantic has a huge footprint in Ireland and it’s not been easy for us or for our grantees to fully appreciate what that will mean. Our board recently met with the Taoiseach and government ministers about what we are seeking to do in our final years and the key questions that arose were about impact and sustainability. We are using two approaches to sustain our work and maximize impact. One is to share our experience and that of our grantees with the government as much as possible in order to help inform effective allocation of limited resources, particularly in the areas of children and ageing populations. The other is to focus on organization of limited resources around shared objectives. We are working with grantees to design their work around a post-Atlantic funding world.

Have you been working at all with One Foundation on this?

Yes. We’ve been co-funding with One Foundation for some time and I met with Declan [Ryan] last week in Dublin. We agreed that if we plan thoughtfully as we conclude, if we signal to the various stakeholders and government organizations we wish to influence how we’re going to do that, that’s as good a job as we can do. I think One Foundation has done a good job of signalling their conclusion and working to make sure the recipients of their support understand what that means for them. We have more work to do in that regard, but we’ve begun it.

You say in your annual letter that it is your mission that Chuck Feeney’s gift and Atlantic’s work inspire others to take a Giving While Living approach to their own philanthropy. What would be the single key message you’d like to give to people considering whether or not to spend out?

Can I just start by saying that language counts, and we’re not particular fans of the term ‘spend out’, even though it’s an accepted term in philanthropy. We think it places the emphasis on the spending rather than on the intention to maximize impact in a short period, which was really Chuck Feeney’s motivation: why wait to address the need when you can do it now? We tend to use “Giving While Living” as our headline, which incorporates both the intention of the donor and the effort to address things sooner rather than later.

I think the message of Chuck Feeney and of Atlantic is that there are urgent needs now and you can make a big difference in your lifetime by fully engaging. For high net worth individuals, applying their resources, their experience, their passion to these great needs is a deeply satisfying process and one in which they can achieve results in a short period of time. Our greatest hope is that Atlantic’s work and that of its grantees will reflect that. We are very sensitive to ending well. We want to conclude with that message in mind and we’re concerned that we can maximize the value of our experience in that regard so that people recognize that it’s an effective approach to philanthropy.

If I’m a philanthropist and I’m considering what kind of foundation to set up and I say to you ‘what about future generations and future needs?’, what would your answer be?

I would say that one group or individual can’t do it all. We are seeing an increasing trend for high net worth individuals to focus on philanthropy – the Giving Pledge, for example. Chuck Feeney is a forerunner of that tendency, which has now grown to over a hundred high net worth individuals representing hundreds of millions, even billions, of dollars in philanthropy. I think our best contribution to that effort is to give examples of what has been effective and why it makes sense to engage fully sooner rather than later. I think Chuck would agree that there is now more money behind the idea of giving and the fact that our funds are not going to be available beyond a certain period of time does not mean there won’t be significant funding for philanthropy in the future.

What do you see as Atlantic’s greatest legacy?

If I were to list a catalogue of ‘greatest hits’ among our themes, I would have to include initiatives in Ireland to strengthen the higher education sector and to strengthen a knowledge economy through funding research and universities. In Vietnam, I think we brought together initiatives in physical infrastructure and influencing health delivery to primary healthcare systems, which is going to have a lasting legacy. But I believe it’s the Giving While Living approach that is the greatest legacy: the example that, with concentrated effort, with discipline and commitment to an issue, you can make a difference sooner rather than later.