Poverty is like slavery, argued Emilio Rui Vilar of the Fundação Calouste Gulbenkian, and it too can be ended: by redistribution. These words were spoken at the opening plenary of this year’s European Foundation Centre conference in Rome, in the first of his three years as chair of the EFC. Caroline Hartnell talked to him after the conference about what role foundations can play in this redistribution, what their future priorities should be, and how he sees the role of the EFC over the next few years.

You mentioned in the EFC opening plenary that the majority of the Millennium Development Goals (MDGs) are unlikely to be met. You also said that poverty can be ended through redistribution of resources, which is quite a radical thing to hear. How can foundations, and particularly European foundations, contribute to this?

I intended to challenge our plenary, to show that though things sometimes look impossible or improbable, history demonstrates that they can be achieved, like the abolition of slavery. At the end of the 18th century, when the first anti-slavery movements began, a lot of people considered it a dream, but by the end of the 19th century, it was more or less eradicated.

I also quoted an African proverb which says ‘poverty is slavery’. Poverty is of course very complex, and takes many forms, but we cannot simply mitigate the problem, because it’s human dignity that is at stake – it’s the life of many children and many women – although the world has enough resources. If each government, each society, takes the eradication of poverty as a goal, I believe it will change from being a dream to becoming a possibility.

Foundations can be strong advocates for this. Of course, foundations’ resources can’t cope with the problem, but we can challenge our governments, our societies, our multilateral organizations. We know that the MDGs will not be met by 2015 – and they were in any case quite modest because the 2015 goal was to reduce poverty by half – so I tried to challenge my foundation colleagues to start a movement, not looking just at the short term but taking an open-minded and global look at these kinds of problems.

When you talk about foundations carrying out advocacy, do you mean directly or supporting grantees to do it?

Both. Foundations can do it directly, and we can leverage partnerships working with multilateral organizations; we can also support organizations that are on the ground and are attacking these problems.

What about the global dimension? It’s easier to lobby your own government about the situation in your own country, but who do you lobby about addressing poverty in Africa and other developing countries? Governments in the very poor countries are not going to cope without help from the richer countries.

We need a different approach to development aid. In some countries there is not the political willingness to deal with the problem; in others, there are no means. But in these countries, we can help with development schemes that in their term can help them change their production structure, and with donations that can mean immediate relief.

Do you think, given the recession and the crisis we’re facing at the moment, there is going to be a tension for foundations between addressing needs within the countries that they are based in and those in the developing world?

In the short run, that kind of tension might occur, but I was impressed, as I said in the closing session, by the way foundations in general are reacting to the crisis by concentrating on the essential and eliminating the non-essential. I strongly believe that, for instance, European societies must look more carefully at developing countries that are the source of undocumented migrants. Instead of building walls and instituting patrols in the Mediterranean, what we need is to give those people an opportunity to work in their own countries. They don’t have any other choice but leaving their countries; they migrate because their families are starving. If we could create better conditions in these countries, a lot of people would rather stay there.

So do you see it as an appropriate role for foundations to make the links between what seem like European problems, like how to deal with undocumented migrants, and the roots of those problems, which lie elsewhere?

Yes. Particularly as we are not engaged in the day-by-day political discussions and we can look outside the chaotic chain of events that the media bring to the spotlight, and we can tackle the right issues in the correct timeframe.

As chair of the EFC, what’s your vision for European foundations, both in Europe and in the wider world? 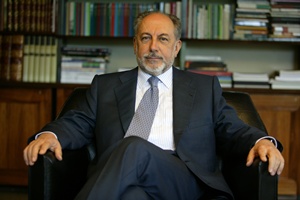 I’d highlight a very important recent development. The number of European foundations that are working across borders and outside Europe is increasing, and that is a very positive trend. I would like to see this trend continue, since issues like climate change, intercultural dialogue and global health cannot be addressed on a regional or national basis; we need to work together. Of course, some foundations have statutory limitations, and that is why the European foundation statute could give an additional impetus to this very positive movement.

As the chair of the EFC, what I expect is that, first of all, our membership will grow. In comparison to the number of foundations in European countries, the EFC has relatively few members. Second, I hope that European foundations go on improving their governance structures and practices, becoming more transparent and accountable, which will also mean that trust in our institutions and our work will increase.

Do you have in your own mind any sort of benchmarks for your three-year chairmanship?

As we are in Rome, let me quote Hadrian’s memoirs. I don’t remember the exact words, but it’s along the lines of ‘happiness is something that happens in very short moments’. I believe if we reach our benchmarks I will be happy for a moment, but I will be looking for an additional benchmark beyond that one.

At the closing plenary, you read out a statement by European foundations on xenophobia. What do you hope that statement will achieve?

It was a strong statement and very timely when laws regarding undocumented immigrants are being discussed at state level in Italy, for example. It’s also our intention to send the statement personally to the president of the European Commission and to the political parties of the European Parliament. It’s important that foundations make their voice loud when human rights and human dignity are at stake.

Next year’s conference is the 20th EFC annual general assembly and it’s going to be a special one. Could you say a little more about what you hope to achieve through that conference?

The venue will be Brussels and the main subject will be Europe and the future of European institutions. We plan to organize a week-long fair or marketplace of ideas and we will try to increase our interaction with European institutions and other European bodies. We will also have exhibitions showing people what foundations are and what they do and of course we will have the usual debates, conferences and meetings.

Finally, what role would you see the EFC playing in steering European foundations through the financial crisis?

The asset situation is very different among foundations and so they are trying to reorganize themselves in very different ways. But there is a group supported by the EFC that gathers the finance managers of around 30 important foundations. They met recently in Lisbon and had very interesting discussions, sharing their experiences and their views. We are trying to learn from each other how to address this very difficult situation, particularly because we don’t know what the total impact will be and how long the situation will remain volatile.

EFC chairman Emilio Rui Vilar has had a long and influential career in fields as diverse as politics, business, finance, education and philanthropy, both in his native Portugal and on the European stage. Born in Oporto in 1939, he graduated in law, spent time in banking, and held ministerial posts in national government in the 1970s before serving as director general of the then European Communities Commission for three years. He is president of the board of trustees at the Fundação Calouste Gulbenkian, president of the Portuguese Foundation Centre, and a trustee of the pan-European cultural initiative ‘A Soul for Europe’.