Lisa Jordan of the Bernard van Leer Foundation went to the Clinton Global Initiative this year for the first time. Why did she go? Was it worth it? And what can other European foundations gain from following suit? The CGI makes most sense for foundations interested in public-private partnerships, Jordan told Caroline Hartnell.

Many of the CGI commitments are public-private partnerships, and you can watch and learn how to put these together. At Bernard van Leer Foundation, we’re struggling at the moment to create a very simple contract around sports with the city government in The Hague. They have no experience of creating a public-private arrangement, so CGI is a place you can take lessons back from and say ‘here are six examples of how this was done in other cities’. 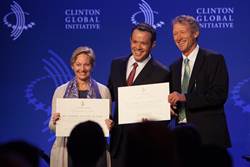 Is it also an opportunity to join such partnerships?
It’s a big network of very well endowed corporations and high net worth individuals. However, it’s unusual for private foundations to participate. We decided to because we wanted to bring a profile to the issue of young children’s needs, and this is an audience with a lot of power and money. The Clinton team agreed to highlight the issue and held a plenary with the President of Malawi, Discovery Education, GAIN, UNICEF and Save the Children on a panel talking about why investing in young children is an ‘irresistible opportunity’. The result was 13 new early childhood investments. I calculate that $330 million worth of investment in young kids came as a return on the $20,000 it cost us to go![1]

Did joining also enable you to form relationships with other members of the network?
Nine of the 13 who made commitments are people we don’t work with, so we can now reach out and develop a relationship with them to promote young children’s needs. But you have to want to work outside the foundation field, because foundations are a minority at the CGI.

Another thing: even though it’s called the Clinton Global Initiative, it’s global in the way that everything else in the US is global. As an American myself I can say it’s American with a global conceit. There were heads of state there – the Presidents of Malawi and Egypt, for example – but the actual membership is probably 70 per cent American, Americans who are concerned about what’s going on outside of the US borders and want to help to resolve some of those global problems.

What sorts of issues came up?
The thing that really struck me was Obama talking about human trafficking. He was the only person who took up a big social justice issue. It’s really the ugly underside of globalization and nobody talks about it. We have slavery rates today that are higher than when the transatlantic slave trade was active. He mentioned three or four ways in which the US government is going to try and make sure that its procurement procedures are not fostering or working with any private sector actor using involuntary labour. He also suggested ways in which corporations could do something similar. Clinton followed him and said: ‘This is an area where I had really hoped to see more commitments.’ I can imagine that next year, you’re going to see some public-private partnerships around the issue. The roles were each laid out quite clearly, and there’s an opportunity for governments, private sector corporations and civic organizations, including philanthropists, to do something to address a very large social problem.

This sort of issue is rare at CGI. It’s really a giant brokerage house and it’s very much oriented around product development and market-based solutions. As a result, you do not seem to get many deep conversations about the root causes of societal problems that most traditional foundations focus on. Most participants at CGI are very practical and concrete – ‘how do we drop the price of an incubator from $2000 to $30, and then create one that can be used in a village so babies don’t die?’ It’s more to do with engineering than it is with power. That’s why the human trafficking debate really stood out, because that is to do with power. I am interested in finding out if there is a way to marry this practical power with the long-term focus of foundations for greater impact on young children’s lives.

Will you go next year?
If you are going to play in the CGI space, you should be in there for three to five years to really reap what you can get out of it. To create something from those potential new partners I mentioned takes a lot of energy and time. So, our board has yet to decide, but for the moment the spotlight is on young children’s needs, and I am grateful for that.