Sonal Shah, head of the new White House Office of Social Innovation and Civic Participation, discusses with Matthew Bishop the opportunity to dramatically improve the impact of the best non-profit ideas, the intermediate role for grantmaking institutions offered by the new Social Innovation Fund, and how she hopes to foster a better ‘division of labour’ between government and foundation funding.

The Obama administration is ‘interested in finding what works and how we can invest in it’, says Sonal Shah, head of the new White House Office of Social Innovation and Civic Participation. ‘We are looking at what innovations are taking place, asking why they are working, what is the scaling opportunity, what sort of funding is needed?’

The creation of this new White House office was in the works long before the economic crisis, but it represents a paradigm shift in the relationship between the non-profit sector and the US government, which under President Obama is setting out its stall to partner more extensively than any previous administration with philanthropists, foundations, social entrepreneurs and other non-profits, and even for-profit private companies. The Office of Social Innovation is intended to be the driving force of this transformation of the relationship between government and non-government. How it gets on, and whether it becomes a new model for smart government, will be watched closely all over the world.

Shah was recruited from Google.org, Google’s philanthropic arm, where she focused on global development, mostly in India and East Africa. Her first priority in the new post has been the launch of the government’s Social Innovation Fund, which is expected to start off with an annual budget of $50 million, though if all goes to plan, this will get much bigger. The Office will not run the fund – which will be overseen by the government’s Corporation for National and Community Service – but it is designing it.

She expects the money to go to 20–25 organizations, which will receive between $1 million and $3 million each. Crucially, this will not be classic grant funding, but ‘growth capital’ designed either to help the organization expand or to replicate a successful model elsewhere. Despite its name, the goal of the fund is more to find proven innovations that are ready to grow than to stimulate new innovations – though presumably the development of a reliable path to growth will encourage social innovators to try more things that might scale up this way.

Shah expects the allocation of the money to be a ‘truly competitive process’, and that the winners will be organizations that have established some metrics and done evaluation for themselves and can demonstrate that they have had an impact on the community. She and Melody Barnes, Obama’s domestic policy adviser, among others, will be taking part in a nationwide ‘Community Solutions Tour’ to look at examples of success.

Although some of the money will go directly from the fund to non-profits, the bulk will be distributed through intermediaries – probably venture philanthropies like Venture Philanthropy Partners, New Profit Inc or Social Venture Partners. This way, Shah hopes, the entire infrastructure for funding the growth of non-profit ideas that work will be transformed.

In the long run, the goal is to create ‘a bigger marketplace of intermediaries’. The way the Social Innovation Fund allocates its money will be designed to enable other funders, including foundations, to invest too. ‘The philanthropic community has been extremely thoughtful in their feedback,’ says Shah. Already a group of foundations has formed, led by the Edna McConnell Clark and Bill & Melinda Gates Foundations, to think about what growth capital is and how to partner most effectively with government to provide it.

‘Hopefully, we will know later this year if they want to match government funds or be complementary,’ says Shah. While requiring an investment by the fund to have a matching donation from a private foundation would be a good source of discipline by ensuring that there was a second opinion in favour of every idea, there may be a better division of labour between what the government funds and what foundations fund. The key point, says Shah, is that ‘as government we know we can’t do this alone’.

Beyond but encompassing the Social Innovation Fund, Shah says her new office has a mission to get the entire US government to do a far better job of partnering with those with good ideas outside government. ‘How can we build better public-private partnerships? This is not just about government writing cheques.’ Already, she is working closely with colleagues in the Department of Education and the White House Office of Science and Technology Policy on several promising initiatives, including how government might better leverage open source technology. (At Google.org Shah worked on various projects to use technology to provide poor people with better information, such as on where community development funds had been allocated and on the quality of education being received by their children.) 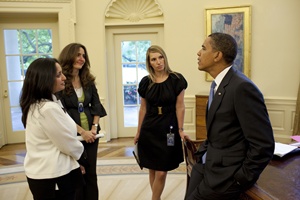 She sees three huge opportunities. The first is to play a convening, catalytic role in establishing effective capital markets for non-profits. The second, closely related to this, is to drive a big improvement in metrics and evaluation of impact in the non-profit sector. She has already had lots of conversations with non-profits who say that though they are increasingly expected to do evaluation and metrics, ‘there’s not a lot of funding out there for it. Nor are there good enough mechanisms for learning from what didn’t work.’ She hopes the government can work with foundations and non-profits to develop shared standards for metrics and evaluation.

The third area of opportunity is to increase civic engagement by the public at large, as fundamentally ‘service is what fuels the non-profit sector – you can’t do one without the other’. This was a major theme of the Serve America Act, passed early this year and due to take effect in October. One theme is likely to be translating to the non-profit sector the techniques that the Obama election campaign used to motivate and mobilize its supporters, particularly by deploying social media, such as Facebook and Twitter.

Some non-profit leaders worry that making civic engagement a responsibility of the Office of Social Innovation could prove a distraction from the bigger but potentially far more controversial task of transforming the effectiveness of the non-profit sector and of public-private partnerships. Shah says she sees synergy between civic engagement and social innovation, and that the Obamas do too. Both President Obama and the First Lady have worked extensively in the non-profit sector, points out Shah, who says that in their speeches about volunteering they lay much emphasis on the importance of the Social Innovation Fund. ‘Their conversation about service is not just about communities but about how do we build capacity in the sector.’

Impact of the economic crisis

What impact will the worst economic crisis since the 1930s have on the ability of the Office of Social Innovation to make a difference? Shah says she has certainly heard from ‘lots of groups about how a lot of funding streams have dried up. This is a tough environment, and from what we hear, 2010 may be tougher.’

Yet there has been a genuine silver lining to the crisis. ‘It has really opened up an opportunity to have these broader discussions about effectiveness, what works and what doesn’t – the role of capital markets and about how to get capital to the most effective organizations.’ She has been encouraged by hearing ‘lots of examples of collaborations between non-profits, and between funders, all over the country – Detroit, Cleveland, Austin, Durham’.

The biggest challenge, she says, is ‘how much we want to accomplish with such a small team – just four people, including me! But we know what our priorities are, and already many people have been surprised by how fast we are going about achieving them.’