In 1998, CNN founder Ted Turner announced his intention to give $1 billion to UN causes over ten years – then one of the biggest donations ever made. The initial plan was that the UN Foundation, created to distribute the funds, would ‘sunset’ in ten years. Why did he change his mind about this and how will the foundation now be funded, Alliance asked Ted Turner. How can the UN Foundation and other private funders contribute to achieving the Millennium Development Goals? And what did he hope to achieve by signing up to the Giving Pledge?

You created the UN Foundation in 1998 with the aim of ‘sunsetting’ in 2008. Why have you now changed your mind about this?

I created the UN Foundation because I believe it is important to support the work of the United Nations, the only institution with the international reach and capacity to solve the world’s biggest challenges. If we are going to create a better world, we need to work together because we can’t do it alone.

When we first opened our doors in 1998, corporations, foundations, NGOs and individuals were not sure how they could partner with the UN. The UN Foundation opened the door to partnering with the UN and helped former Secretary-General Kofi Annan create a new UN agency focused on partnerships.

Initially, I thought the UN Foundation would close its doors after my $1 billion gift ran out, but as the foundation built successful partnerships between the UN and the Vodafone Foundation, the American Red Cross, Rotary International, the National Basketball Association, and The People of The United Methodist Church, among others, the UN recognized the UN Foundation’s strength in building partnerships with them and asked us to continue to leverage my gift to bring new partners to the UN.

People and organizations that choose to invest in the UN are investing in a global network of people who can truly deliver on the ground and help save lives. I’ve always said it’s the best investment I ever made because dollars go further and do more than they can in other organizations. We help the UN take its best work and ideas to scale – through advocacy, partnerships, constituency building and fundraising. 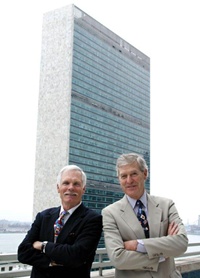 Over the past decade, the UN Foundation and its partners have helped the UN keep thousands of girls in school and prevent child marriage, provide sustainable energy to hundreds of thousands of people, reduce polio by 99 per cent worldwide, immunize 700 million children against measles, create a grassroots movement to send more than 3 million anti-malaria nets to Africa, and champion the payment of more than $1.6 billion in US debt to the UN. I think the impact we’re able to make with the UN is the most obvious reason for continuing our work. [Ted Turner is pictured here with Senator Timothy E Wirth, president of the UN Foundation, in front of UN headquarters.]

But we still have a lot more to do. We just launched the Global Alliance for Clean Cookstoves at the Clinton Global Initiative with Secretary of State Hillary Clinton [this involves the Shell Foundation, Morgan Stanley, the State Department and Environmental Protection Agency, the German government, the World Health Organization, and several other UN agencies]. This is a bold new initiative to save lives, improve livelihoods, empower women and combat climate change by creating a market for clean and efficient household cooking. Half the world’s population cooks on traditional stoves that release dangerous soot and smoke into the air – pollutants that kill an average of one person every 20 seconds.

This initiative is an example of how the UN Foundation brings foundations, governments, private businesses and charities together to help raise awareness about massive problems that affect billions of people around the world.

What role can the UN Foundation play in helping to achieve the Millennium Development Goals?

UN Foundation supporters and partners are already helping the UN advance the MDGs. By sending bed nets to Africa, they have reduced child mortality by saving children who may otherwise have died of malaria. Our brand new Girl Up campaign gives American girls the opportunity to channel their energy and compassion to raise awareness and funds for UN programmes that help some of the world’s hardest-to-reach adolescent girls. Through Girl Up’s support, girls have the opportunity to become educated, healthy, safe, counted, and positioned to be the next generation of leaders.

But we can’t stop now. Anyone who wants to take action can visit our website to find out what they can do to help.

I invite others to join me to continue the critical work of the UN Foundation.
We offer a unique way of partnering with the UN that is different from other organizations. Investing in the UN is an investment in a smart, global, impactful organization. Contributions go further and do more good than to almost any other organization or cause.

How will the UN Foundation be funded if you’re here for the long haul? Presumably your own funding will inevitably constitute a smaller part of the whole? Are you now looking for new partners, including non-US partners?

Yes, we are always looking for new global partners. Our philosophy of finding partners to work through the UN is more meaningful than ever before. The UN is the only organization that delivers food, aid, health care and security on a global scale. With support from governments, NGOs and generous partners, the UN is helping meet basic human needs, every day.

The UN Foundation invested my gift wisely and has used it effectively over the last 12 years. Every dollar of my gift actually turned into $2 on the ground. And the Foundation invested in low-cost, large-scale solutions to problems such as measles and malaria. An anti-malaria bed net costs just $10 to produce and deliver. Measles vaccines cost $1 per shot.

It’s also important for the foundation to be sensitive about the current economy and we need to find ways to encourage creative thinking and partnering together. Our work on these issues won’t stop but we recognize that others may have to scale back the resources they invest, so now we are taking a strategic look at how we can all do more with less. We can’t afford to let progress on the MDGs stop so we need to find new ways to leverage partnerships and bring additional resources to bear on global problems in a cost-effective way.

You have recently joined the Giving Pledge. What do you hope to achieve by doing this? Do you think it is likely that the Giving Pledge will increase support for international development, and for the MDGs more specifically?

I don’t measure success in numbers, but I consider my contributions of more than $1.3 billion to various causes over the years to be one of my proudest accomplishments and the best investment I’ve ever made. Those dollars have improved lives, saved species, fought disease, educated children, inspired change, challenged ideas and opened minds; at the time of my death, virtually all of my wealth will have gone to charity.

Over the years, the UN Foundation has done innovative work to make the world a better place and has helped strengthen the UN in the process. This gives me a lot of satisfaction, as have my efforts to influence other wealthy people to become more active in philanthropy. After the billion dollar pledge, I challenged my fellow billionaires to do more. I do think that we can put our wealth to work for a better world.

Looking back, if I had to live my life over, there are things I would do differently, but the one thing I would not change is my charitable giving. I’m particularly thankful for my father’s advice to set goals so high that they can’t possibly be achieved during a lifetime and to give help where help is needed most. That inspiration keeps me energized and eager to keep working hard every day on giving back and making the world a better place for generations to come.