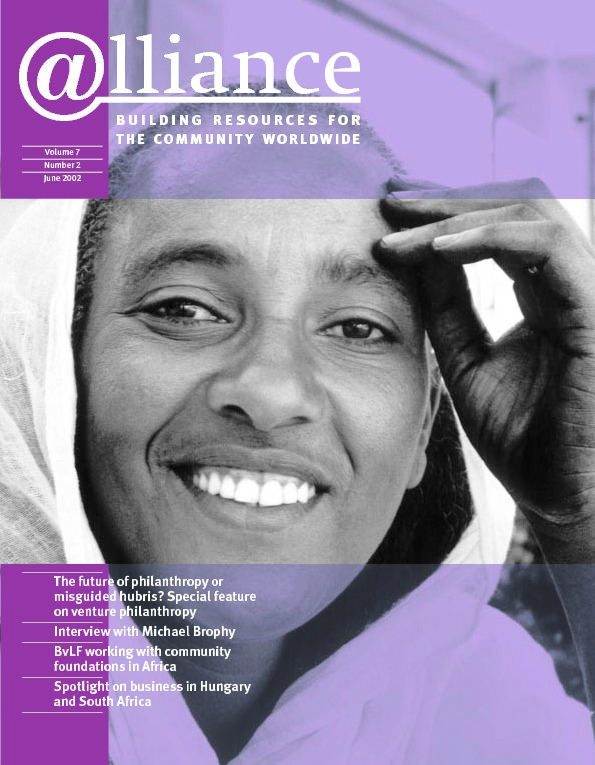 Effect looks at impacts of financial crisis on foundations

A venture capitalist working for global equity firm Advent International has recently joined NESsT’s Hungarian board. How did he get involved with NESsT and why is he interested in venture philanthropy? Alliance talked to Zoltán Tóth. Interestingly, he doesn’t think talk of ‘exit strategies’ or ‘financial return on investment’ makes much sense in venture philanthropy. In fact, he doesn’t think the term ‘investment’ makes much sense – ‘I call it a donation,’ he says.

Tóth already knew Lee Davis, but it was the NESsT Forum in Budapest in October 2001[1] that introduced him to the concept of venture philanthropy. He clearly found what he heard interesting. ‘In the area I come from, philanthropy in general is in start-up mode. There are a lot of NGOs but it still isn’t natural for people to give money to them.’

As you might expect of a venture capitalist, Tóth sets a lot of store by measurement. The emphasis on measuring effects is one of the things that appeals to him about venture philanthropy. Another is the focus on sustainability and having a long-term effect.

While he likes the idea of a measurable, sustainable ‘social return’, Tóth is much less convinced about the financial return on investment. ‘When we first started doing this I thought that we’d get a very decent financial return, that we’d be able to be paid back the money. But after the conference and talking to people, I think the real priority is measuring the other kind of return not trying to get the money back.’ This is partly a question of scale. According to Tóth, ‘the money that is donated is by definition far too small to make a return on. Transaction costs are very high compared to the money that is given out.’ Paying back small sums takes a lot of time and expense. ‘It wouldn’t justify the exercise.’

If there’s no financial return, where does this leave the exit strategy? ‘Well, they go hand in hand … With venture capital, you put the money in and the exit is when you sell the stake in the company. With non-profits that’s very difficult to do.’ So in venture philanthropy might an exit just be stopping investing, rather than getting anything back? The question makes no sense: ‘Well, an exit means getting something back.’

Similarities between the two fields

So what are the similarities between the two fields? Well, the assessment phase is similar. In fact, assessing projects is one of the areas where Tóth hopes to contribute to NESsT as a board member (another is measuring results). ‘There are a couple of things a venture capitalist would look at. You’d look at the organization itself – how it’s managed, what the people are like, what the financials are, how competitive it is, whether the customers need the kind of service you’re providing. This is probably something venture philanthropy should look at too: are these the people we should give our money to?’ A venture capitalist would also look at the major trends, and this is right for venture philanthropy too. ‘You look at whether the activities of the non-profit are relevant today or not.’

Managing the investment is another area of similarity. To Tóth the idea of giving a lot of non-financial support to NGOs you are investing in makes good sense. ‘You have to take care of what you invest. You have to follow up and make sure that things are going in the direction you have agreed on. When for whatever reason the company or organization decides that they want to go to a different party, you have to discuss it with them, see if you can accept the different concept.’

What is completely different, ‘poles apart’ in fact, is the whole motivation system. ‘In venture capitalism, people are in there because of the money. It’s different with venture philanthropy.’

But Tóth clearly feels that even without the financial return, the venture philanthropy model is likely to appeal to wealthy individuals who’ve made money in business. Knowing what you want to achieve in the end and having a system for assessing it is very close to businesspeople’s minds. Looking after your money as it is spent is also important. ‘I think businesspeople are trying to translate their way of thinking into the philanthropy world.’

But the initial question about whether venture capitalists would be interested in investing in venture philanthropy is probably wrongly formulated ‘because it’s not an investment – I call it a donation.’

Zoltán Tóth works for Advent International. He can be contacted at ztoth@hungary.adventinternational.com