Inspired by Graça Machel and supported by a pan-African movement of civil society organizations, the Africa for Haiti campaign was launched in January to appeal to Africans to help rebuild Haitian communities. Several members of the African Grantmakers Network were involved both in the political substance of the campaign and in making financial contributions.

TrustAfrica, Southern Africa Trust, Synergos and the African Women’s Development Foundation were among the original founders of the campaign, along with organizations such as African Monitor, CIVICUS, CAF Southern Africa and Women’s Foresight Network. By the second month, about six members of AGN had pledged more than a total of $65,000 and many other contributions had been made by foundations, corporations and individuals.

The campaign fell squarely within AGN’s mandate to mobilize resources from the continent for development purposes. The thinking behind the campaign – that it should be pitched as a medium to long-term intervention if it is to have an impact – is also central to AGN’s principles of sustainable development and local ownership of development projects.

One area that AGN sought to address at its launch in July 2008 was changing attitudes on African agency. This has been an opportunity to demonstrate that Africa is not just a victim always ready to receive aid, but that historically and culturally Africans do give to address problems affecting others. 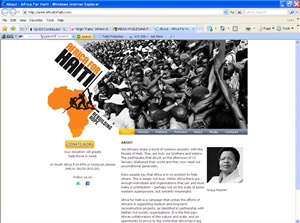 One of the main challenges facing the campaign is maintaining momentum. This may provide an opportunity for members of AGN to measure mobilization strategies and assess giving patterns in Africa in a long-term framework. With its first major conference coming up in November 2010, AGN thus has an opportunity to locate African philanthropy on an international level in terms of practice, theory, quality and quantity.