As governments convene for their annual climate change talks in Bonn, the concentration of carbon dioxide in the atmosphere is just about to pass the symbolically important 400ppm level for the first time ever [1].  Under the Cancun Accord, governments have committed to reducing annual emissions so that increases in global warming do not exceed 2°C. Anything above this is considered to create unacceptable risks to global society and the economy. Carbon Tracker’s aim is to align global capital markets with this objective.

The idea is to do this by ensuring that investors and capital market regulators do not, through inaction, finance fossil fuel development that would take the planet above 2°C of warming. This might be achieved through investor moratoriums on new coal/oil IPOs; write-downs of the assets of companies owning coal reserves; or investors rebalancing their portfolios into energy efficiency or renewable energy.

Carbon Tracker’s seminal report Unburnable Carbon: Are the world’s financial markets carrying a carbon bubble? Quantified – company by company in the top 200 oil, gas and coal companies, and stock exchange by stock exchange – the exposure of the financial markets to the carbon bubble risk. This is the risk of the corporate owners of fossil fuel reserves (and their shareholders) being left with assets that cannot be developed in a world which decides to limit planetary warming to 2°C. The combined proven oil, gas and coal reserves currently held by fossil fuel companies, on which their share value is based, will produce far more CO2 if consumed than is consistent with 2°C of warming. Written down or written off, these reserves will become what we call ‘stranded assets’. 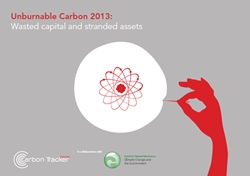 In partnership with the Grantham Research Institute on Climate Change and the Environment at the London School of Economics, Carbon Tracker’s second report, Unburnable carbon 2013: Wasted capital and stranded assets, explores this further. It starts by estimating the amount of carbon dioxide that could be put into the atmosphere if global temperatures are not to rise by more than 2°C. The maximum is about 900 gigatons between now and 2050. We call this the world’s ‘carbon budget’. Existing fossil fuel reserves already contain almost three times this amount. Our report refers to the excess as ‘unburnable carbon’.

We found that $674 billion was spent last year finding and developing new potentially stranded assets. If this continues for the next decade, economies will see over $6 trillion in wasted capital – capital that could otherwise be returned to shareholders and deployed into alternative productive activities.

To prevent this, we are asking regulators, such as the Bank of England’s Financial Stability Committee, governments and investors to re-evaluate energy business models against carbon budgets. The extent of the over-reach – which means that about 80 per cent of reserves will have to be written down – has implications for the way companies are valued, capital is raised and capital markets are regulated. Ratings agencies have expressed concerns, with Standard and Poor’s concluding in a report with Carbon Tracker that the credit ratings of oil sands companies could be downgraded within a few years, making it more expensive for the companies to raise debt. This is the kind of signal the markets need to increase costs for fossil fuels and flag carbon-intensive activities as high risk.

Our study makes a number of specific recommendations to help governments, regulators and investors identify and respond to these carbon valuation risks. Regulators should require companies to disclose the potential CO2 emissions of fossil fuel reserves. Finance ministers should initiate an international process to incorporate climate change into the assessment and management of systemic risk in capital markets. And investors should challenge companies that are using shareholder funds to develop high-cost fossil fuel projects.

We have launched a joint campaign with ShareAction for pension holders to ask their pension fund providers what they are doing to protect their savings from the carbon bubble. This online action tool gives members a quick and easy way to make their views known and have a voice in the debate. Meanwhile 350.org continues to extend its campaign for institutional investors to disinvest from fossil fuel holdings to Australia and Europe, building pressure from grassroots campaigners.

Our next steps are to get investors to challenge the capital being poured into finding more reserves and to get regulators to recognize the systemic risk of unburnable carbon.

Mark Campanale is founder and director of the Carbon Tracker Initiative. Email mark@campanale.co.uk