With over 600 participants from 100 countries and keynote speakers ranging from environmental activist Marina Silva to Roberto Bissio of Third World Watch, the 2012 CIVICUS World Assembly and Youth Assembly was a great success. One concrete outcome was the Montreal Civil Society Commitments for a New Social Contract. CIVICUS will now focus on implementing these commitments. 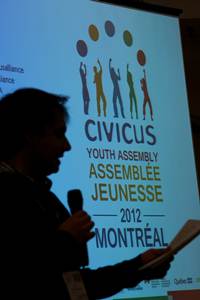 The CIVICUS World Assembly and Youth Assembly encompassed 53 activity sessions through which participants developed a series of recommendations for the New Social Contract. The Montreal document clarifies 15 key commitments civil society actors will implement as they seek to work more effectively to challenge and change the rules of engagement between citizens, the state and other holders of power.

In its efforts to support civil society as a whole and to implement the New Social Contract, CIVICUS’s Strategic Priorities for 2013-17 aim to strengthen the links between different sources of citizen action, ensure that there are safe spaces and accessible processes for the promotion and advancement of civil society, and ensure that civil society has maximum influence on the decisions that will define our common future.

CIVICUS has declared 2013 to be a year for more active social change based on its renewed aspirations for increased inclusion and cooperation for all sectors of society, and has rededicated itself to these efforts.