Introducing the ‘Pledge Guarantee for Health’

An inconvenient truth in the world of global health is that donors and aid recipients rarely maximize the amount of drugs and other so-called ‘health commodities’ purchased with donor funds. In fact, a recent Brookings Institution study found that between 7 and 28 cents is lost on every dollar allocated. When you consider that there are an estimated $7 billion worth of grant commitments for the purchase of drugs and other materials (like prophylaxes and bednets) to combat diseases such as HIV/AIDS and malaria and to promote reproductive health every year, there is a significant inefficiency built into the market.

The reason for this is fairly complex, but it often boils down to the fact that there is a long time lag between when an aid recipient (usually a ministry of health or an NGO) receives donor funds and when it actually pays suppliers such as drug manufacturers for their goods. This has the effect of driving up commodity costs. Donors, recipients and suppliers have learned to operate in this context. But what if there were a way to effectively eliminate the time lag?

Enter the Pledge Guarantee for Health (PGH), a new finance tool for health aid dreamed up by the United Nations Foundation and supported by the Bill and Melinda Gates Foundation. The basic idea is that when a donor issues a grant, a bank steps in and offers a letter of credit to the recipient which is equal to the donor’s grant. This gives the recipient short-term liquidity to negotiate the best price with suppliers. With cash up front, aid recipients are in a better position to negotiate good prices. 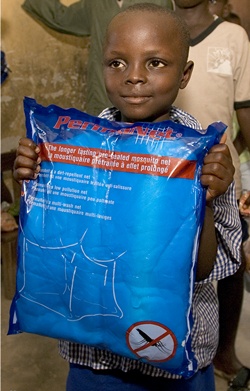 For their part, banks need to believe that their loan will be paid back in full and on time. Initially, they are likely to tread cautiously: this is a brand new sector in which they have only limited experience. Under the PGH, the UN Foundation and the Gates Foundation have made available $20 million over five years to help guarantee these loans, which will help to shore up bankers’ confidence.

Each of the stakeholders stands to benefit from this arrangement. A reliable payment structure means suppliers can more effectively manage their production chain. This in turn means aid recipients can form health strategies around a reliable timetable for aid delivery and not have to worry about running low on stocks of, say, crucial ARV medicines. Banks benefit from being given a foothold into a traditionally unbanked sector. And because the fees and interest that banks charge for these loans amount to less than the 7 to 28 per cent that is typically lost, donors are getting more for their money.

Initially, PGH transactions will be piloted in countries that have a solid reputation for careful stewardship of donor funds. Once it becomes clear that donors, banks, recipients and suppliers all stand to gain from this arrangement, expect PHG to take off – and perhaps even be extended to other areas of development assistance.