Back in 2010 two foundations came together to set up within NEF a pooled fund aimed at filling the gap in knowledge about what works in preventing violence against children in low- and middle-income countries. This is how the Children and Violence Evaluation Challenge Fund was born in 2011.

Following the first call for proposals in August 2011, 479 concept notes were received and nine grants awarded to support evaluations of violence prevention interventions across four continents. (The illustration below shows a map of grantees selected under the first call for proposals.) Among the interventions currently being evaluated are parenting education, community-based child protection mechanisms, building children’s life skills, and housing programmes to indirectly reduce the risk of maltreatment at home. Approaches vary from randomized controlled trials through quasi-experimental designs to more qualitative approaches and mixed methods. Findings are expected to come in from later this year until 2015. 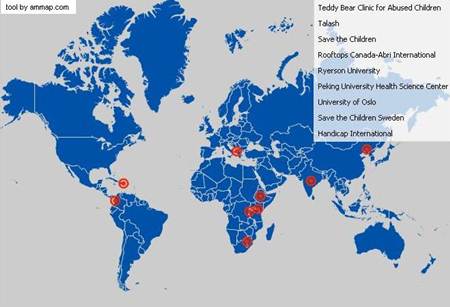 In the meantime, a second call for proposals is under way. This time partnerships between implementers and evaluators will be required, and new mechanisms to provide ongoing mentorship are being discussed.

In framing this second call, the fund sought strategic advice from global and regional experts through a two-day consultation in London in October. Experts from the UN SRSG (Special Representative of the Secretary General) on Violence against Children’s Office, UNICEF, WHO and Save the Children were among the participants, along with NGOs and research institutes from Africa, Latin America and Asia. This highlighted the potential of the initiative in terms of expanding the body of evidence, raising the bar for evaluations, and fostering a dialogue between researchers and practitioners in the child protection sector.