The 2010 Global Status Report on Community Foundations, launched at WINGSForum in Lake Como last November, is a complete departure from earlier editions of the report. Whereas earlier editions focused almost exclusively on the growth and distribution of community foundations, the current report also describes their role and impact. It investigates global trends, assesses the contribution of support organizations, describes relations with donors, and tells stories about work they are doing. 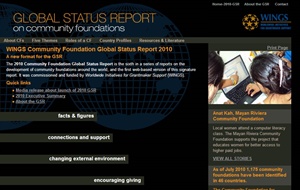 In addition, the current report is presented on its own website, which includes a compendium of resources for those wanting to develop community foundations, as well as an archive of earlier Global Status Reports.

The main effects of the work of community foundations are increased citizen involvement, linking up different parts of the community, increasing giving, and encouraging trust between people. Such ‘soft’ outcomes are often seen as second class in a world where ‘hard’ issues of ‘growth’ and ‘income’ are what matter. However, there is increasing recognition that trust is critical to the success of a community, and development efforts typically fail where it is absent.

While civil society across the world is suffering a funding crisis with reduced money from international donors, the report found growing numbers of local donors stepping forward to support community foundations. This, combined with the effectiveness of support organizations, means that numbers of community foundations continue to grow. The growth of community foundations in Europe has been spectacular over the past decade, and there are signs of take-off in Africa and increasing activity in Asia. Jane Humphries, chair of WINGS-CF and director of the team that produced the report, said:

‘Community foundations give individuals, families and businesses a way to engage with and give to their own communities. That’s why the business model continues to gain ground across the world.’

Readers can download parts of the report to use in their own contexts so long as they acknowledge the source. They can contribute their own stories too.

For more information
Contact the project coordinator, Vera Billen, at Billen.V@kbs-frb.be
The report can be found at http://www.wings-community-foundation-report.com