From donors to partners – achieving growth with equity

Charitable giving in China in a new legislative environment

How much do Pakistanis give and who do they give it to? Answers are to be found in a new report entitled The State of Individual Philanthropy in Pakistan produced by the Pakistan Centre for Philanthropy (PCP) and released in early 2017.

In 2014, the year on which the report’s findings are based, Pakistanis gave Rs239.7 billion ($2.28 billion). It’s a figure that may surprise some – it is over three times more than the amount estimated in a previous study in 1998, which produced a figure of Rs70 billion. The comparison, it’s fair to point out, is slightly misleading. Considered as a percentage of GDP (0.9 per cent), it is lower than the 1998 estimate (2.6 per cent of GDP).

Another striking aspect of the findings is how widespread the practice of individual giving is. Nearly 98 per cent of households in the survey reported either monetary, in-kind giving or giving of time. As the report notes in its executive summary, the study ‘makes clearly evident the enormous potential for individual giving and social investing in Pakistan’. 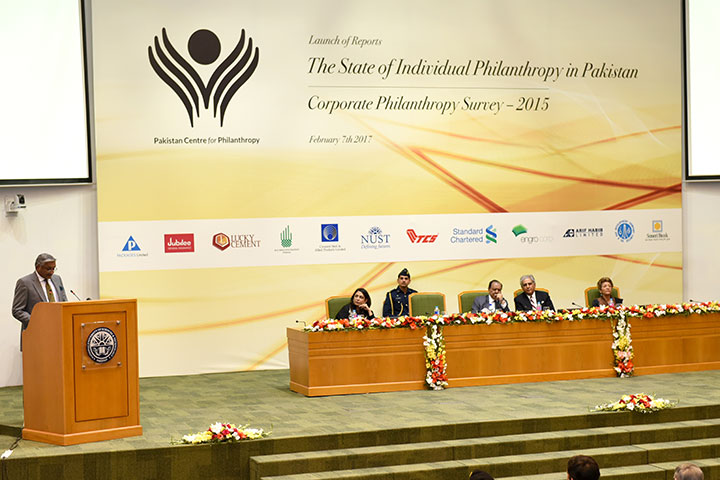 A research study on ‘The State of Individual Philanthropy in Pakistan’ was launched at National University of Science and Technology (NUST) by Pakistan Centre for Philanthropy in February. President of Pakistan Mr Mamnoon Hussain was the chief guest.

It also reveals some familiar elements – most giving goes to local individuals or faith-based organizations.

Mistrust or sometimes simple ignorance prevent individuals giving to other forms of social organization – findings that have implications for both the sector itself and for future government policy towards it, as the report also notes.

The study draws on a sample of 10,000 households, focus group discussions and interviews with relevant stakeholders across the four provinces of Punjab, Khyber Pakhtunkhwa (KP), Balochistan and Sindh.

The most common forms of giving are non-Zakat financial and in-kind donations. Zakat donations account for about a third of the total monetary giving and, by assigning a monetary value to time given, an estimated 21 per cent comes from volunteering.

Individuals tend to give predominantly to individuals, and mostly to those who are seen as needy. When it comes to organizations, the principal beneficiaries are mosques and madrassas, especially those that are local. In order for secular institutions to receive donations, the majority of participants stressed the importance of trust and transparency. People prefer giving to organizations that have a record of success with visible outcomes and that encourage local involvement in decision-making.

According to the Pakistani government’s 2015 economic survey, nearly 39 per cent of Pakistanis live in multi-dimensional poverty, a percentage that rises in rural areas. Individual generosity therefore comprises an important supplement to state-run social programmes combatting poverty. However, most Pakistanis are unaware of both existing charitable organizations (a further possible reason why those near at hand are preferred) and of new policy initiatives to increase giving.

The report argues that a campaign is needed to raise public awareness on both counts in order to maximize the potential benefits of individual philanthropy. It also adds a caution: the evidence suggests that individual giving to individuals provides an informal but critical social safety net for many. Any policy change that seeks to shift individual giving towards organizations should be wary of damaging that net.