In February this year, WINGS and GIFE held a joint event to present the results of two pieces of research undertaken by WINGS in the previous year – the 2010 Global Status Report on Community Foundations and the first ever Global Institutional Philanthropy Report. 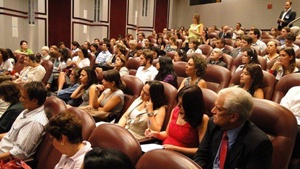 More than 80 participants attended the event. Subsequent discussion focused on the lack of data available in many parts of the world, and the importance of improving data collection and analysis as a means to strengthen and advance philanthropy.

In addition to publicizing the research findings, the event fulfilled a number of other functions. First, it inaugurated WINGS’ presence in São Paulo, which, under the aegis of GIFE, is the organization’s new home.

Second, it marked a step in Brazil’s positioning itself in the international arena. While it gave Brazilian social investors a clearer picture of international philanthropy, it helped open the way for Brazil to share its own experience of social investment with the rest of the world.

‘Besides becoming an important global player,’ said GIFE’s secretary general and WINGS chairman Fernando Rossetti, ‘the country is one of the main actors in the social investment field and in the search for solutions to social-environmental challenges.’

Following this event, both WINGS and GIFE are appearing to participate in other pre-eminent philanthropy gatherings, such as the Council on Foundations conference in April and the European Foundation Centre AGM and Conference in May. GIFE will promote the participation of Brazilian delegations at the two events and the findings of the two WINGS reports will also be presented.