Shortly after Zimbabwe’s power-sharing agreement between President Robert Mugabe and opposition leader Morgan Tsvangirai a few years ago, citizens in the country were reintroduced to an independent daily newspaper – the first in seven years.

‘We are constantly balancing financial risk and mission impact,’ says Harlan Mandel, CEO of the Media Development Loan Fund (MDLF), a New York-based organization that invests in independent news outlets at risk of harassment and persecution. ‘In Zimbabwe’s case, we decided that the mission impact was potentially huge and justified taking the very high risk of financing a project at that point.’ 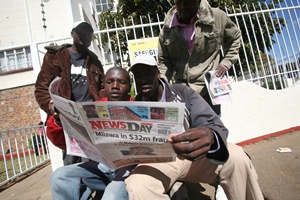 MDLF went ahead with an investment in NewsDay (pictured), now the largest daily in the country with a readership of 50,000 after overtaking the state-sponsored paper. Notably, it is not an opposition paper but a critic of both sides of the government.

Success stories like these help to prove that independent media not only underpins democratic institutions, it’s also profitable. MDLF clients (organizations receiving debt and equity financing and consultations) with a five-year relationship on average almost quadruple their sales while write-offs stand at a mere 2 per cent of the total loaned and invested. More than $16 million has been returned to investors, and MDLF’s portfolio stood at $41.7 million in outstanding loans and investments at the end of the second quarter of 2011.

MDLF is also pioneering the use of structured financial products. In partnership with Swiss private bank Vontobel and social investment consultants ResponsAbility, it issues social bonds, raising capital to support unbiased media in all its forms in countries across Africa, Asia, Latin America, South-east Europe and the CIS.

The latest vote of confidence from investors came auspiciously on 3 May, World Press Freedom Day, when the group’s bond issue sold out in two days, raising CHF2.25 million ($2.7 million) from a financial product paying 1.5 per cent annual return over a five-year term and guaranteed for two-thirds of the notional amount by the Swiss government. Its first effort yielded 12 per cent over a five-year term which ended this year.[1]

Head of financial products, advisory and distribution at Vontobel, Georg von Wattenwyl, says the product is a response to private clients wanting sustainable wealth management. ‘It is a very good example of an investment bank coming together with an organization that delivers social benefits,’ he says.

MDLF is now considering another issue sooner than expected. Given favourable conditions, two more issues of CHF5 million ($6 million) are planned, one before the end of the year and the other on World Press Freedom Day in 2012. 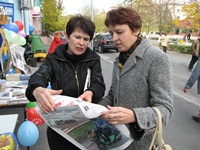 For a classic example of how these funds are used, spokesman for MDLF Peter Whitehead points to Russian newspaper and client Krestyanin (pictured), which means ‘Peasant’. The regional paper is not only expanding its own operations but also generating revenue by selling printing services to customers. However, this is not without disruption.

Krestyanin had to stop the presses after a regional court ordered the closure of its printing house in May for fire safety violations. Whitehead believes the shutdown occurred more for political reasons.[2] Although the presses have since resumed, he warns that this harassment might be a prelude to further actions ahead of Russia’s parliamentary elections in December and presidential elections in March 2012.

It is precisely this role of media as an effective check on corruption that keeps it in a funding crunch: banks tend to be risk averse towards an industry facing politically motivated shutdowns. Moreover, in some countries, available financing may come with editorial strings attached and often at prohibitively high interest rates of 18 to 20 per cent, compared to MDLF’s average rate of 6.5 to 7.5 per cent.

And for the smallest loans, which are impractical to administer, clients are pursuing their own media lending efforts started with MDLF funding. Independent radio news agency KBR68H, the largest in Indonesia, for example, provides small loans within its 800-strong network, covering the entire archipelago to West Papua.

MDLF has the distinction of being the only funder of some thousand categorized under the label ‘human rights’ in the Global Impact Investing Network’s online database, says Harlan Mandel. ‘You cannot underestimate the power of giving people voice and creating an informed citizenry,’ he adds.

1 The previous bond was structured differently, combining a note on the Swiss franc and an investment in MDLF split 80%/20% respectively.
2 http://www.mdlf.org/en/main/newsroom/263/Krestyanin-starts-printing-again-after-court-lifts-ban.htm

Anna Reitman is a freelance journalist based in the UK. Email annareitman@freelancejourno.info

Why bother with a theory of change?