Responses to terror – the Internet at full potential?

It is widely recognized among social psychologists that beliefs have a bigger impact on what we see of reality than does reality itself. In other words, our systems of belief filter what we see, creating huge blind spots. Whether intentionally or not, Alliance has recently given us an excellent illustration of this in the context of philanthropy.

In all the pages of text that have appeared in the 13 years of this enormously insightful and engaging periodical dedicated to revealing ‘what’s happening in the philanthropy and social investment sectors across the world’, readers will look in vain for a single article focused on the most widespread form of philanthropy of all – one that engages more people in a typical year than live in any country but China; whose annual economic value, even conservatively estimated, exceeds the GDPs of all but six of the world’s countries; and which generates more charitable resources each year, by a factor of at least 10 to 1, than the wealthy charitable foundations that absorb the bulk of attention not only from Alliance but also from other philanthropy-oriented periodicals, books, training sessions and seminars.

The answer to the first question is of course volunteering, the giving of time. It is the only form of philanthropy that has been the focus of a specially declared UN ‘year’, the tenth anniversary of which is now being celebrated, and is also the special focus this year of the European Union – neither of which facts has so far been highlighted in the pages of Alliance. 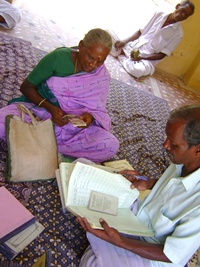 The answer to the second question – why this form of giving seems to fall so regularly into philanthropy’s blind spot – is more complex. One factor, doubtless, is the greater visibility of cold cash and the fact that volunteering does not help struggling non-profits (including magazines) to pay their bills. Volunteering also lacks powerful trade associations to call attention to its contribution, and is largely invisible in basic economic data. Beyond this, volunteering has long found itself in the middle of an ideological tug-of-war between conservatives who want to use it as an excuse to cut government spending (remember Ronald Reagan’s line that ‘We have let government take away too many of the things that were once ours to do voluntarily’) and social democrats who trivialize it in order to underscore the need for continued state involvement. These factors have created the perfect storm for relegating this largest form of philanthropy – whether measured in terms of people involved or economic value – to virtual invisibility, proving once again that ‘what isn’t counted doesn’t count’.  (Pictured: R Pushottam volunteers full time as president of his village branch of Indian volunteer organization the Elder for Elders Foundation. Here he helps a local resident manage her pension and community loans.)

But now at least one of these factors is about to change. In March of this year, the International Labour Organization formally approved a new ILO Manual on the Measurement of Volunteer Work. Produced by a team at the Johns Hopkins Center for Civil Society Studies under the auspices of the ILO Department of Statistics and an international Technical Experts Group, with support from United Nations Volunteers, this manual calls on statistical offices around the world to begin measuring the scale and economic value of volunteer work as part of their regular economic data systems, and it provides detailed guidelines for how to do so in a systematic, comparative way.

The ILO manual proposes a highly cost-effective method for putting volunteer work on countries’ economic map, using a slim, two-page supplement to regular labour force surveys to generate powerful data on the number of volunteers, their demographic characteristics, the activities they perform, the time they devote, and, once the activities are translated into standard occupational codes, the economic value of their contributions.

With these data, countries will be better able to encourage volunteering, identify barriers to it, and make more effective use of the enormous resource that it represents. Five countries have already adopted this manual and a global effort has been launched to promote it more broadly. With other social resources under greater strain than at any time in recent memory, it is time to remove this blind spot in our charitable belief system and give this ultimate ‘renewable resource’ for social and environmental problem-solving the respect it is due.

Lester M Salamon directs the Johns Hopkins Center for Civil Society Studies and led the team that developed the ILO Manual on the Measurement of Volunteer Work. Email lsalamon@jhu.edu

Why bother with a theory of change?