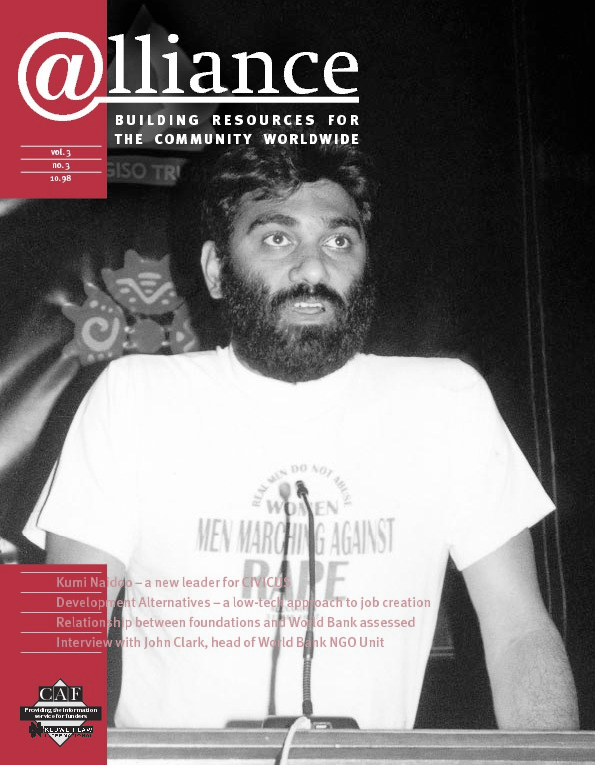 The notion of the failing capacity of government alone to provide all the goods and services wanted and needed by the public has been with us since the early 1980s. It has never been contended that government will be replaced in any meaningful sense. It has, however, been suggested – indeed, believed – by many that the independent sector can in part ‘fill the gap’, and in particular that it can divine public needs better than government can. How realistic is this assumption?

While foundations can be quite innovative in identifying critical public needs and ways in which they might be met, they haven’t the resources to meet such needs directly. Perhaps it is the recognition of this limitation that has led foundations to seek to leverage more adequate government response through influencing policy.

The tendency for foundations to actively seek to influence policy on specific public issues is perhaps most evident in the US. At the Council on Foundations annual meeting in Washington DC in April, the ‘how’ of exacting policy change was the main theme.

All this leads to yet another question: just how ‘independent’ should one seek to keep the independent sector? US foundations place great value on their freedom of action. Yet, in seeking to develop a more symbiotic relationship with government in order to effect policy influence, this freedom may be reduced.

While I have many concerns about the worth of directing scarce foundation resources to effect policy formulation, I find this clarion call to seek to influence government policy of particular concern where corporate foundations and giving programmes are involved. As more and more corporations seek to align their community social investments with their long-term strategic business interests, there is real danger in having businesses and governments cooperating in policy determination.

The alleged use of child labour by US firms operating abroad, particularly in the Asia Pacific region and Mexico, provides ample evidence of the difficulties here. Environmental issues provide yet another example. Corporations, by their very nature, are inclined to remain mute on important public policy issues in order to protect market opportunities, not because corporate managers are uncaring or indifferent but because they have to respond to shareholder interests.

I do not contend that business cannot have a positive influence in identifying social problems and possible solutions. There is a fine line to be drawn, however, between helping NGOs and the publics they serve to understand the need for policy change and taking on the task of attempting to effect this change directly.

On the issue of the independent sector’s partnering with other sectors, one must also sound a cautionary note. Much is being made of the need for foundations to ‘partner’ with governments, but partnering with governments that may be out of touch with the public’s interests and needs seems to be somewhat problematic. In the US case, for example, few Native Americans would accept as legitimate a foundation that might partner with the Bureau of Indian Affairs.

Foundations are not always open to public scrutiny. Many do not have adequate representation, either among their staff or on their boards, of those whom they seek to represent or aid. So another question arises, ‘Who or what keeps foundations reliable in their representations of the public’s policy interests?’ The Council on Foundations’ original concern was the public’s lack of knowledge of what foundations are and do. Given the spate of negative press over the past decade (United Way, New Era Foundation, Freedom Forum, etc), the key item on the ‘influencing policy’ agenda still seems to be to try to alter and inform American public opinion and its political representatives of their worth.

Delwin Roy is former President and CEO, The Hitachi Foundation.