Advisers’ perspectives – The role of philanthropic advisers in continental Europe

There is a country in EU’s neighbourhood which could be called a donor desert. Belarus. Not a single independent western donor is allowed to have an office here (most donor representatives would not get even an entry visa). During the 17-year rule of dictator Alexander Lukashenko, donors have been viewed by the regime as either subversive or outright enemies. They have been expelled from Minsk and their activities are carefully monitored by secret services and law enforcement agencies. This includes attempts to get details of supported projects’ accounts in foreign banks.

Western donors, both public and private, need to reflect upon the political and technical hurdles of operating in this post-Soviet open-air museum of oppression. The more so as, since the atrocities following the December 2010 presidential election, the EU has tightened its Belarus sanction policy (travel bans for about 200 Belarus leaders, asset freeze in western banks, etc) and declared its willingness to assist more vigorously individuals and groups fighting to develop a more open society in Belarus.

Western democracy assistance over the last two decades has worked best when linked to the EU membership perspective and the willingness of candidate countries to accept deep reform conditions attached to it. Since the Belarus of Lukashenko is not interested in EU membership, the EU’s repertoire of assistance is significantly limited. However, recent brutal disruptions of peaceful protests, the torture of political prisoners (including presidential candidates), the abolition and harassment of civil society and independent media have helped convince the 27 EU members of the need to tackle more intensively long-term violations of human rights on its doorstep.

One of the key issues in foreign assistance in post-communist countries and beyond is transparency and accountability. Western donors have not only espoused these principles themselves but also supported numerous indigenous organizations to spread these habits in their societies, introducing pluralistic democracy.

Again, the ways and means of doing this do not apply in most instances in Belarus since it remains a closed society, thus pushing western organizations to deal with many dilemmas and apply quite often unknown or forgotten underground methods of assistance. Most independent civic groups in Belarus do not have, or have lost, legal status, and rebellious individuals from any walk of life are under permanent police surveillance. Open support to these people or groups would automatically put the supporters in jeopardy or in jail.

It has taken a long time, particularly for public donors from the EU member states or EU-funded programmes, to overcome this significant hurdle and become engaged in openly declared support to civil society, the independent media and the democratic opposition, all of which are officially labelled as subversive, illegal activities and unacceptable interference in domestic affairs. Arguments and methods of developing consensus to support ‘illegal’ pro-democracy forces, parallelled with practical delivery of assistance to harassed groups in Belarus, may be of great importance in dealing with other oppressive regimes.

The developments of the last six months have not only facilitated consensus-building among EU member states in their stance over Belarus; they have also brought unprecedented and lively cooperation between public and private actors across the Atlantic. There have never been so many joint statements adopted and coordination meetings organized between the EU and the US as there have been over this issue in recent months. Moreover, transatlantic partners have held conferences where pledges of increased funds to support civil society and democracy were made. 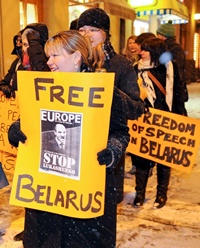 One of the key issues will be monitoring how effective delivery of these promised resources is, especially once they are specifically targeted by the Lukashenko regime, which is not only intensifying the harassment of its own people but also focusing more and more on donor agencies. It is a good and very important sign that the violations of human rights among, and the sufferings of, the people of Belarus have helped to increase cooperation and coordination among donors. The time will come, sooner rather than later, when donors and their grantees will be able to meet openly in Minsk and tell another story, that of victory over an autocratic regime. (Pictured: A ‘Free Belarus’ protest in Helsinki, March 2010.)

Pavol Demes is Senior Transatlantic Fellow of the German Marshall Fund, based in Bratislava. Email pdemes@gmfus.org