For the immensity of the sea

A new cross-sector initiative is developing a collective and distinctively Indian response to the climate crisis.

My father has often said if I want to build a ship, I should bring people together, not to hunt for wood or to construct the craft, but to teach them to long for the immensity of the sea. For purposeful change, you require a shared vision and goal. You have to ensure everyone you bring on board is gazing outward, in the same direction. That was the task before us, in building the India Climate Collaborative (ICC).

Spring 2018. At a meeting in Bombay, a group of twenty-five of India’s leading philanthropists and industrialists are debating whether they should collaborate to avert the climate challenge facing India. Their conclusion: ‘We need to work together. We have to.’

Cut to almost two years later. Over ten of the country’s foremost philanthropies have come together to found the India Climate Collaborative (ICC), the first-ever collective response by industry leaders such as Ratan Tata, Anand Mahindra, Rohini Nilekani, Nadir Godrej, Aditi and Rishad Premji, Vidya Shah and Hemendra Kothari, among others, for effective action towards a shared climate goal.

An Indian solution
And it stretches beyond philanthropy. Mandated to amplify and spread local solutions, we are a coordinated ecosystem of Indian donors, implementers, government representatives, businesses, academia, civil society and communities who will work together with support from the international climate community. The ICC will drive collective investment and connect diverse voices, and in doing so, craft a uniquely Indian response to climate change, attuned to our needs and development priorities.

The ICC is unique and important because it is not championing one solution, or one approach. It exemplifies what we know – no one is protected, and everyone has a responsibility. 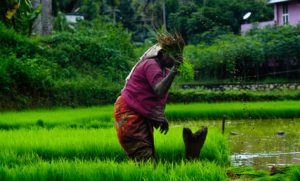 “India is deeply vulnerable to climate change due to its high dependence on agriculture, long coastline and reliance on fossil fuels.”

An initiative like ours is important, not only because it takes a stand on a highly complex issue like climate change, but also because it is a powerful instance of true collaboration in the Indian philanthropic sector.

At the moment, climate-focused philanthropic funding in India remains low, less than 10 per cent of the total philanthropic funding, and concentrated in sectors like agriculture, and energy and the environment. This is because, despite the opportunity, philanthropies face a set of challenges that they require assistance with, from a lack of technical knowledge in how to connect climate change action to philanthropic activities, to the absence of a collective climate strategy to establish best practice and programmes. There is also a low level of awareness: some foundations know about the unintended impacts of their programmes on climate change but not much action is being taken to address it. Equally important, foundations lack the capacity to measure impact of their own programmes in contributing to climate change, nor are they able to assess the potential effects of climate change on current portfolios.

The value of collaboration
It makes sense to ‘de-risk’ investments by ensuring the collective will to act and to coordinate a wide range of actors to exchange ideas, information and best practice. Collaboration is also key to collectively identifying priority research and knowledge needs, and to framing a long-term agenda for tackling climate change. We avoid duplication in research and can align financial investments towards outcomes that are highly innovative and necessary, even if risky. Collaboration also means opportunities for co-investing in institutional capacity – in other words, how can we drive our capital to build the climate change ecosystem in India? 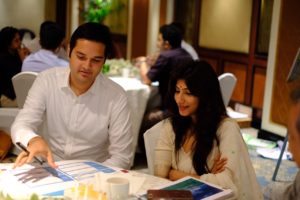 A convening organised by the ICC.

Also incredibly important: collaboration can amplify existing voices and develop future leaders to tell the story of India through the lens of Indian institutions, individuals and communities. In India we are still writing our development story. It is a narrative that weaves human and ecosystem development work together to combat climate change. This is what will make a resilient and future-ready India.

And our story is also unique.  The solutions that exist overseas are not going to be as effective in India as Indian solutions. Our scientists, innovators and educators are engaged in India-specific work but these efforts, from technology solutions, to social enterprises and research are disaggregated and they need to be integrated and shared more widely and more effectively.

Philanthropic funding has a key role to play. Not only is it adaptable enough to fund innovation, but it also supports those that are most affected…

Leveraging collaboration and through our members, ICC intends to be the foremost thought- leader, convener and storyteller as well as a catalyst for innovation and impact on climate change in India.

Now…
The timing could not be more critical. 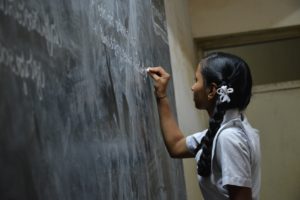 India is deeply vulnerable to climate change due to its high dependence on agriculture, long coastline and reliance on fossil fuels. We are already facing the initial effects of climate change with rising temperatures, decreasing rainfall and extreme weather events becoming more common. Unless we act now, India risks deeper, more systemic effects in future. It ranked highest in climate-triggered deaths in 2018 and is the fifth most vulnerable of 181 countries to the impacts of climate change. Approximately 42 per cent of India’s land area faced drought in April 2019, worsening the farming crisis. Since 1980, nearly 60,000 suicides in India are attributed to warming temperatures, accounting for almost seven per cent of the national upward trend in suicide rates. There has been a 150 per cent rise in air pollution related deaths over the past 20 years and in 2017 alone, India saw 1.2 million deaths due to air pollution. India suffered an economic loss of $37 billion due to climate change in 2018, of which losses due to floods amounted to $2.8 billion.

Climate change materially affects nearly all philanthropic work, not just that which is concerned with its more obvious effects. Climate-linked health issues and reduction in agrarian incomes can lead to reduced school attendance and learning outcomes. In a country like India where you have sizable populations living under the poverty line who are highly exposed to climate risks, it is an issue that can profoundly affect development outcomes.

An exemplar of the commitment and vision that we hope ICC can provide is Rohini Nilekani. Author, former journalist, shareholder of IT giant Infosys and a founder of the ICC, Rohini Nilekani has been a long-standing advocate of the need for an indigenous model of innovative philanthropy taking bigger risks, taking the risk of collaboration, being more audacious, and giving more. For her, climate change is a big problem which Indian philanthropy needs to start tackling now. She’s seen the effects of climate change first-hand, through the work of Arghyam, which she built to support organisations working on groundwater and sanitation. Climate change is exacerbating water shortage in India.

Millions are losing their livelihoods due to climate change. Much of what makes India unique could be gone in the next few decades…

Given that extreme weather events are becoming more common, resulting in widespread human and economic loss, India’s initial response has been positive. The country is becoming a leading voice on climate issues, and our global commitments are increasingly being reflected in domestic policy. What is also heartening is that the initial climate ecosystem of actors is gaining critical mass. But significant challenges remain. India suffers from a number of systemic issues such as an under-developed policy infrastructure, insufficient and misdirected funding, inadequate research and data gaps, not to mention low awareness and engagement around climate change. Given the interconnected nature of these challenges, collaboration across both sectors and functions will be critical to developing a holistic climate change response.

Philanthropic funding has a key role to play. Not only is it adaptable enough to fund innovation, but it also supports those that are most affected, because climate change will have a disproportionate impact on poor populations, who are both more exposed to climatic changes and also have less resources to deal with the adverse effects.

The vanishing toddy-tappers
The ICC is unique and important because it is not championing one solution, or one approach. It exemplifies what we know – no one is protected, and everyone has a responsibility. Its power is in its diversity of sectors and people. We want them not only to be inspired and engaged, but, ultimately, motivated to take action. In India, there are professions known only to a few nations. Like toddy-tappers who climb 50 palm trees daily, each one thrice, in season. From the sap they make palm jaggery or a fermented liquor called toddy. In peak season, a toddy-tapper climbs a height greater than New York’s Empire State Building – every single day. This and many other occupations are in collapse, millions are losing their livelihoods due to climate change. Much of what makes India unique could be gone in the next few decades. We are losing worlds and voices of which future generations will know little or nothing. This is a critical juncture for a paradigm shift in how we think about the world around us and how we seek to act to preserve it, in all its diversity and beauty.

There have been countless encouraging advances in the global climate movement. A dozen years ago, the movement was small, disjointed, inconsequential. A collaborative like ours was not possible then; it is now. That is stunning. And encouraging.

Shloka Nath is the executive director of the India Climate Collaborative