Harnessing the power of media to achieve change

The Pacific islands are large ocean states that cover over 10 per cent of the global ocean, and include over 33,000 different islands. The people who live on them contribute less than 0.03 per cent of the world’s total greenhouse gas emissions, but they are on the frontline of climate change and the most vulnerable to its impacts. The region is also home to most of the world’s large Marine Protected Areas. Any damage done to these areas is likely to be felt by the rest of us.

According to the Inter Governmental Panel on Climate Change (IPCC), ocean warming accounts for more than 90 per cent of the energy accumulated between 1971 and 2010, and this is causing profound changes in the Pacific Ocean. As the ocean warms, it expands. Predictions from the IPCC of a rise in sea levels of up to one metre by 2100 spell disaster for islands whose highest points are between three and four metres above sea level. Destructive extreme weather events threaten the region each cyclone season. In February 2016, for example, Fiji was struck by Cyclone Winston, reportedly the most powerful cyclone ever in the Southern Hemisphere.

‘Predictions from the IPCC of a rise in sea levels of up to one metre by 2100 spell disaster for islands whose highest points are between three and four metres above sea level.’

Pacific Islanders’ food security is threatened by droughts and salt water inundation. The effects of warming seas and ocean acidification mean that the region’s coral reefs, one of the world’s most productive ecosystems and the basis for the islands’ food security, are under threat. Corals can tolerate only a small degree of warming before they bleach and die. Most shallow-water coral reefs can cope with a rise of 1.5 °C, but they will die after a 2 °C rise which is why Pacific islands are insistent that warming must be limited to no more than 1.5 °C. For them, the difference between 1.5 °C and 2 °C is a matter of survival. 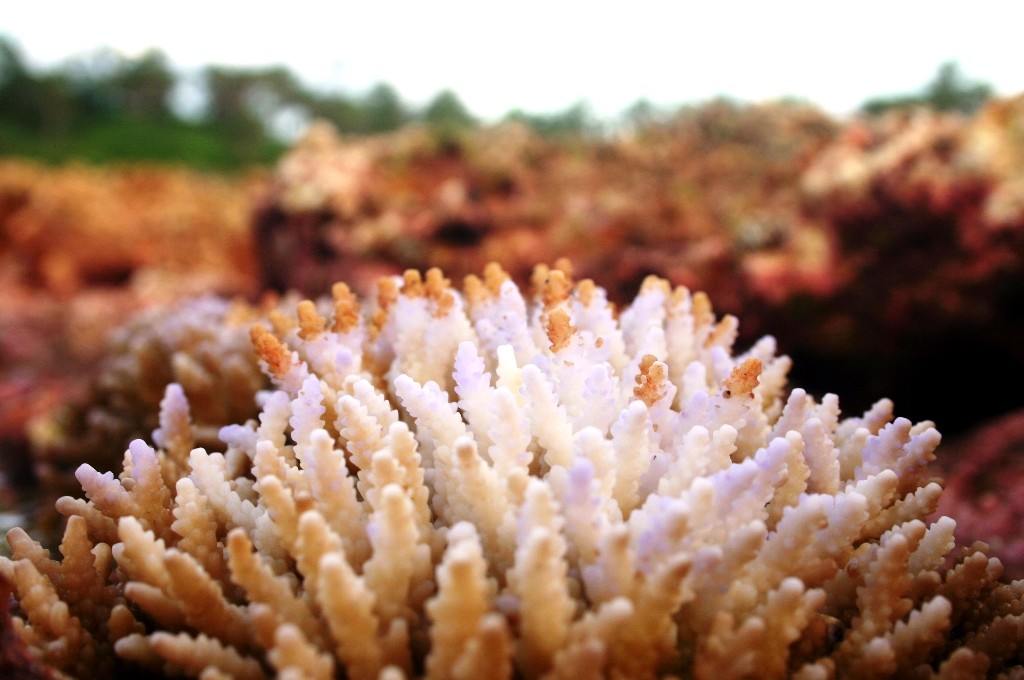 Corals can tolerate only a small degree of warming before they bleach and die. Credit: Edna Allen

What is happening to counter this? The Pacific Islands Partnership on Ocean Acidification, funded by the governments of New Zealand and Monaco, has undertaken a vulnerability assessment of countries most likely to be affected, and provides the basis to safeguard ecosystems such as seagrass beds that provide natural protection against acidifying seawater. The Secretariat of the Pacific Regional Environment Programme (SPREP) and other regional agencies are engaged in a multitude of activities to support Pacific island communities in their efforts to deal with climate change. Digital and satellite technology is making possible the monitoring of huge protected marine areas such as the Phoenix Islands in Kiribati and Palau Marine Sanctuary.

There are numerous opportunities for philanthropic organizations and social entrepreneurs to contribute to these initiatives. Several foundations have already made lasting commitments in the Pacific Islands region. Oceans Five, a consortium of philanthropic foundations, including Oak, Marisla, MacArthur and DiCaprio Foundations, has supported the establishment of large Marine Protected Areas in the Cook Islands and Niue. One Reef (onereef.org) negotiates agreements with communities in Micronesia to establish protected areas and achieve sustainable management of coral reefs. The Pacific Islands Round Table for Nature Conservation provides a forum for encouraging engagement by philanthropic organizations.

‘Without assistance from the rest of the world it is unlikely that the children now growing up in the atolls of the Pacific islands will grow old there.’

Without assistance from the rest of the world it is unlikely that the children now growing up in the atolls of the Pacific islands will grow old there. The Pacific Ocean, the lifeblood of island communities, is under threat. But these impacts are not isolated. What is happening to them and their ocean will soon happen to the rest of the planet.

‘Investing in the protection and better management of our natural systems is a crucial response to climate change,’ says Kosi Latu, director general of SPREP. ‘Nearly all the world’s large Marine Protected Areas are in the Pacific islands, safeguarding vital ecosystem services such as oxygen production and providing food for all on earth.’