After years of relying on international NGOs, funders are beginning to value the contribution Indigenous Peoples can make to environmental conservation

In October 2020, the 15th conference of Parties for the Convention on Biological Diversity (CBD) will be held in Kunming, China. As governments who attend this historic meeting weigh their achievements over the last ten years and build consensus around the priorities for a post-2020 global framework, the contributions of, and participation by, Indigenous Peoples in meeting ‘in situ’ biodiversity targets will no doubt play an increasingly pivotal role. Yet, the road to having Indigenous Peoples more clearly recognised within the global conservation agenda has taken decades of work and is still often overshadowed by the agendas of large international NGOs and the scientific community.

Many US foundations are rooted in Western-based ideologies of environmentalism that do not easily accommodate diverse cultural ways of knowing and approaches to conservation.

The reasons for this are many. For years, conservation NGOs and their funders worked within a paradigm of ‘fortress conservation’, where the emphasis was on keeping people out of protected areas reflecting deep held notions that nature and culture are separate. Over time, this approach has shifted within academia and increasingly within the NGO sphere to where people are seen as part of nature and larger socio-ecological systems. A recent publication The Conservation Revolution[1] captures this trend and convincingly argues for a more integrated approach to practising conservation in the age of the Anthropocene. Indigenous Peoples and their deep and holistic understanding of environment have always taken this view but only recently have others realised its importance especially for producing lasting and durable conservation outcomes.

What has philanthropy’s role been in the evolution of this thinking? Direct investment in Indigenous-led organisations is largely a departure from the norm in biodiversity funding. In part, the lack of direct investment is due to the fact that donors do not easily recognise existing capacities so they perceive the risk of investment to be higher. Also, many US foundations are rooted in Western-based ideologies of environmentalism that do not easily accommodate diverse cultural ways of knowing and approaches to conservation. Instead, grants to Indigenous communities are largely funnelled through intermediaries, and in the world of conservation this generally means large national and international environmental groups. The result has led to power disparities between Indigenous communities and the large NGOs that dominate the world’s conservation agenda.

Key to the implementation of an Indigenous focused strategy is recognising that grantmaking is more than a financial transaction or the furthering of a donor-driven agenda. 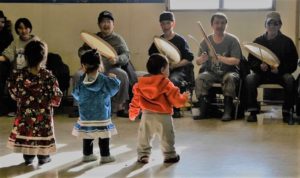 Yet, in recent years philanthropy has increasingly shown a willingness to invest more directly in Indigenous-led stewardship initiatives. In the case of Oak Foundation, the Arctic marine conservation portfolio centered its investments on Alaska Native-led organisations working at the forefront of biodiversity conservation. Here, the foundation recognised the importance of a ‘conservation through use’ approach where marine resources lie at the centre of Indigenous Peoples’ cultural identity and food sovereignty. Investment in Indigenous-led work has led to important precautionary policy outcomes that put Indigenous stewardship and knowledge at the centre of protecting regions from large-scale development, advancing sustainable job opportunities and supporting community-based adaptation in a region undergoing transformational change. In this context, Oak has funded a range of organisations in this effort including: the Bering Sea Elders Group and its work to protect habitat in the Bering Sea from destructive fishing practices; Bristol Bay Native Association and its efforts to create multi-species management plans that build on Indigenous knowledge and stewardship practices and to protect rich traditional fishing and hunting grounds from oil and gas development; Kawerak and First Alaskan Institute and its work to grow and empower young leaders to engage in policy and resource management well into the future. Oak also continues to work with intermediary organisations that redistribute funds to Indigenous-led organisations. The foundation is making a deliberate effort to level the playing field so that more funds flow directly to community-led initiatives and institutions. At the same time, the foundation recognises that Indigenous Peoples need allies, but that those relationships need to be initiated by Indigenous Peoples themselves and based on mutual trust and reciprocity.

Key to the implementation of an Indigenous focused strategy is recognising that grantmaking is more than a financial transaction or the furthering of a donor-driven agenda. It is about developing relationships with people, being open to Indigenous ways of knowing, listening to and understanding how funds can best serve communities, developing tailor-made administrative and evaluation mechanisms, and sharing lessons learned with philanthropic colleagues in ways that will grow a community of practice. Oak is not alone in its efforts as an increasing number of large conservation and development-focused foundations are engaging with Indigenous communities and organisations directly. But the resources required still fall far short of recognising Indigenous Peoples’ existing capacity and wisdom to conserve biodiversity and to overcome the challenges we all face during an unprecedented time of change in our planet’s history.