Founded 25 years ago, the Paul Hamlyn Foundation (PHF) has been funding in India since 1990. Recently, it has made some changes to its strategy there. In addition to supporting individual organizations, it will concentrate on developing and consolidating knowledge of the areas it works in. It has also given its longest-standing grantee, Jaipur Foot, an endowment grant. Sachin Sachdeva, PHF’s India director, told Alliance why … 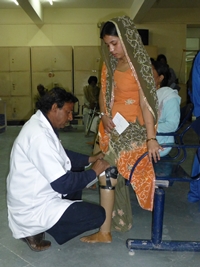 Paul Hamlyn Foundation (PHF) first started supporting Jaipur Foot in 1990 when a group of doctors in Jaipur were beginning to work on the idea. Paul Hamlyn visited Jaipur around this time and was very impressed. The aim was to take the idea to scale, using enhanced management systems and production methods to keep costs low and create a better artificial limb. PHF’s grant helped them sustain their work and leverage funding from other sources. Grants were in the range of 25-30 lakh rupees (£30,000-35,000) a year, which helped with core costs and gave them enough space to experiment and take the work forward. (The photo shows a limb fitting; photo taken by PHF trustees on a visit to Jaipur Foot.)

An expression of faith
Now, as one of the special grants to mark its 25th anniversary, PHF is giving them a £1 million endowment. As Sachin Sachdeva explains: ‘We felt very happy with the way that Jaipur Foot has been working and the endowment is like an expression of our complete faith in the organization. We want them to be as comfortable and as self-sustainable as possible. Their future plans are very progressive and we really don’t need to monitor their work on a year-to-year basis; we feel they have the capacity and the future vision to be able to take it forward.’

The India strategy
PHF has also changed its strategy for India as a whole. For the past eight years, it has been running an open grants programme, under which organizations working directly with vulnerable communities could approach PHF for support. This programme will continue, but its focus will become sharper. As Sachdeva explains: ‘We realize there are a few especially vulnerable communities that need much more attention than they have had so far.’ These fall into four categories: runaway children and children in distress; women and children who are trafficked; migrants from rural to urban areas; and people with mental illnesses.

Another key element in the new strategy aims to bring together the foundation’s experience of work in India ‘in the form of material usable by others interested in working with vulnerable communities … We feel we should consolidate our experience ,’ explains Sachdeva, ‘rather than constantly reinventing the wheel. So we will start looking at some of these issues on a more macro level.’ A small grant can bring understanding of what’s happening in the context of the 500 families or 10-20 villages affected by one particular grant, ‘but if there are 10 NGOs doing similar work but in different environments, using different approaches to the same issue, it is important to be able to draw lessons from all these experiences, and that’s there we feel that research institutions come in.’

PHF’s annual budget for India isn’t large, at around £1.8 million, excluding the endowment to Jaipur Foot. The open grants programme will account for 60-70 per cent of this, with the remainder going to work on the especially vulnerable communities and on knowledge creation and research. But by focusing more sharply on particular groups and bringing in the research element, says Sachdeva, ‘we hope to generate a lot more interest and understanding of these issues, both on the part of government and among wider society. If we can do this, I think we will have made a significant contribution to the development process.’

If it is to achieve its aims, PHF will need to identify good partners to work with. ‘We realize that they’re not just sitting there waiting for us, so an important part of our strategy for the next five years is looking at capacity building of the development sector. As part of the open grants programme, we will make sure there is money available to enable NGOs to access support as and when required.’

All this will amount, in effect, to creating what he describes as ‘a complete package of our work, so we will be able to make the best of the limited funding that we have’.

Changing donor views of India’s needs
The UK Department for International Development (DFID) recently announced that it will stop funding in India by 2015 – a decision Sachdeva describes as ‘a bit unfortunate’.

But can’t India, as a growing middle-income country, go it alone? Indian government funding has been growing and programmes like the Rural Employment Guarantee Programme, he thinks, ‘have definitely begun to have an impact on poverty. Large investments in education and in the National Rural Health Mission are also significant.’ In this context, the £200 million or so that DFID says it will save between 2013 and 2015 by ceasing aid funding to India appears not very great. But in his view its value lies in the flexibility it offered: ‘you need that flexibility so that NGOs can experiment with ideas and processes. Problems are really diverse; I don’t think we have reached a situation where we know what needs to be done for everything.  Experimentation is still needed, and that’s where extra funding is useful.’

In addition, while the country as a whole has seen growth rates of 8.5 per cent over the past four or five years, there are ‘regional disparities, and very poor performance on the MDGs. We are 134th of 187 countries on the Human Development Index.’ All in all, ‘there is still a role for international organizations to play. Paul Hamlyn Foundation recognizes that space and we hope to continue playing a small role in the way some of these processes and ideas are evolved.’

And what of the growing indigenous philanthropy sector in India? What contribution is it making? For the moment, he doesn’t feel that indigenous sources are really offering the flexibility that’s needed to support experimentation and innovation. He sees CSR programmes in particular as trapped in a situation ‘where everybody feels that the impact should be there almost immediately. I think that impact-focused funding tends to limit flexibility and experimentation.’ As far as the new philanthropists are concerned, he feels they ‘are trying to reinvent development giving, but existing experience is not yet fully understood by them’.

However, he does see a few organizations, like the Tata Trusts, ‘where that space for flexibility does exist, and I think the large amount of work that the NGO sector is doing in the country today is because of the space that these trusts provide.’ Funders like this ‘can play an important role in creating greater understanding on the key issues of development’. But even here there is a potential problem: ‘once organizations become really focused on a particular idea or agenda that the trustees or the founder believe in, they tend to get limited by impact-related funding.’

For him, this is what the government should be doing; NGOs ‘should be focusing on experimental work and building innovations’. So far, NGOs have looked at innovations in geographically limited areas. Now, ‘they need to look at it from a sense of scale, because the problems are so large.’

Divining a vision for Markets for Good