Introducing ‘The State of Philanthropy in Africa’ series

As reported in the March 2010 issue of Alliance, Liberia is the first country in the world to create a government office dedicated to facilitating the work of foundations and philanthropists. Founded in April 2009, the Liberia Philanthropy Secretariat helps foundations find key information that is difficult to access in Liberia and encourages information sharing among foundations supporting work in the country. How has the initiative fared? One question was always whether foundations would voluntarily interact with this government office. Another was how successfully the Secretariat would be able to navigate a complicated space between philanthropy, government and civil society.

Over two years into the initiative, there are a number of successes and positive strides to point to. The Philanthropy Secretariat has facilitated an estimated US$16,393,654 in philanthropic commitments and disbursements and 13 foundations have made first-time grants in the country since the launch of the office. Encouragingly, these funders have ranged from small family foundations to some of the world’s largest grantmakers, including the Bill and Melinda Gates and Rockefeller Foundations. One valuable outreach tool has been the two philanthropists’ visits organized by the Philanthropy Secretariat which have brought groups of philanthropists to Liberia and introduced them to dynamic civil society initiatives in the country. The feedback from foundation participants in these events has been overwhelmingly positive.

The Philanthropy Secretariat has strengthened links between external funders and Liberian implementing entities, both NGOs and government offices. One example of this is a project to assist Liberian NGOs in obtaining fiscal sponsorships from US 501(c)(3) organizations. More than nine grants have now been made directly to Liberian NGOs using such sponsorships. We have also initiated a series of workshops designed to strengthen Liberian civil society organizations’ ability to engage with external foundations.

Harder to quantify, but we feel no less important, has been our day-to-day assistance to foundations and philanthropists. This encompasses a range of activities – from sharing the relevant chapter of Liberia’s education policy with a foundation interested in supporting curriculum development in the country or sharing useful NGO and government contact information with foundations to identifying a car rental company for a visiting philanthropist. The worth of this multi-faceted assistance to foundation partners is clear from their response. In fact, several small family foundations who we have assisted have said that our support makes them more likely to direct their philanthropy towards Liberia.

That said, as a young office with a new approach, we’ve certainly encountered challenges. For example, we are learning to better define the appropriate limits of our role. The Philanthropy Secretariat was envisioned as a gateway to Liberia for current and potential funders, facilitating initial contact between funders and implementers. In reality, we have found ourselves compelled to be involved in a much more sustained way. This has resulted in a significant strain on the Philanthropy Secretariat’s staff time and is forcing us to re-examine our approach. 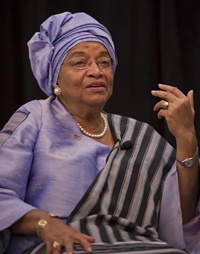 We are also recognizing the need to improve how we go about attracting new foundations to Liberia. While we have reached a number of the initial targets that we have set in this area, we also believe there is a need for a more defined strategy.

A recent gathering with our stakeholders at the Rockefeller Foundation Bellagio Center produced a number of recommendations which we believe will strengthen the Liberia Philanthropy Secretariat. It was decided that the Secretariat should be institutionalized as a programme within the Office of the President beyond the end of the three-year pilot phase. This Bellagio meeting also led to the decision to constitute a Philanthropy Advisory Council (with President Ellen Johnson Sirleaf – pictured – having an ex officio role), which will guide the overall framework for philanthropy in Liberia and improve the Philanthropy Secretariat’s long-term planning and fundraising capabilities.

O Natty B Davis II is Chairman of the National Investment Commission.