Reforming CAP: funders collaborating to change the future of food and agriculture in Europe

For food and agricultural policies in the European Union to become sustainable, systemic reform of the current Common Agricultural Policy (CAP) is needed. This is the basis for the EFC’s funder collaborative, the European Foundations for Sustainable Agriculture and Food (EFSAF), spun out of its European Environmental Funders Group  three years ago. Its aim is to support civil society in shifting European policies towards sustainable systems in these areas in the longer term.

But while reform of CAP is necessary, it likewise represents a major challenge. It accounts for about 40 per cent of the EU’s overall budget and its complexity has increased in an enlarged EU with significant regional variations.

What does ‘sustainable’ mean?
EFSAF has produced a definition of sustainability around which both its members and civil society organisations working on this topic in different countries can rally:

How EFSAF works
EFSAF is not itself an advocacy organisation, though of course advocacy is a key component of the EFC’s work in a number of areas affecting the philanthropic sector. Instead, in pursuit of its overriding aim to move towards sustainable European agricultural and food policies, it provides financial, social and political resources to civil society. The rationale for this is not only the limited experience of the collaborative members in advocacy, but also that there had been little previous philanthropic funding for work on CAP and civil society and other actors agitating for change were under-resourced. 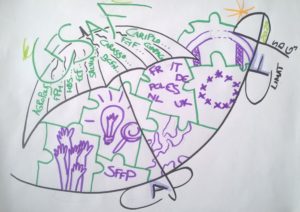 Members support activities like coalition building with a focus on grassroots organisations, evidence-based research, performance measurement of food systems at country level, the development of a common narrative, public mobilisation and campaigning as well as advocacy work towards governments and the EU. There is currently no pooled fund. Instead, there is coordinated grantmaking with members taking over parts of the strategy. The group’s structure is flat with an executive team and full group calls and meetings where decisions are taken. Task forces prepare meetings or coordinate sector work like research or a country focus.

CAP was chosen as the focus because a review of it is planned for 2019 and, learning from the previous reform, EFSAF wanted to act and think ahead of the curve. So far, EFSAF’s main achievements have been at national level with the support to existing, relaunched or restructured national civil society coalitions (see below). At the European level, it works through the informal Sustainable Food and Farming Platform (SFFP), the ARC2020 platform, IPES-Food’s Common Food Policy process for the EU and the Good Food Good Farming campaigning coalition. EFSAF’s strategy also takes account of Europe’s relationships with the rest of the world. Here, the Sustainable Development Goals (SDGs) offer a framework and long (2030) time horizon.

‘EFSAF is not itself an advocacy organisation. Instead, in pursuit of its overriding aim to move towards sustainable European agricultural and food policies, it provides financial, social and political resources to civil society.’

Bringing more funding to the field
The decision to bring more resources to civil society’s work is a result of consultations and co-working with a network of European civil society organisations. The need and the challenge is to provide aligned funding. EFSAF practises loose and flexible coordination of funding for which the joint strategy serves as a guide. In the period 2016-18, members spent around €3 million on CAP-related work, including funding indirectly linked to CAP in fields such as soil, rural areas, health and nutrition for example. EFSAF’s work has also increased impact, provided access to a bigger variety of tools, strengthened grantee networks and increased the technical and policy expertise of both foundations and grantees on the topic.

EFSAF is also open to other like-minded foundations. New members means new allies who increase financial contributions as well as expertise and other non-financial resources. Nor need the like-minded be limited to those already working on agricultural and food topics. There may, for example, be links with work that environmental or health foundations do. New membership might also provide links to, or widen existing networks. Some members are engaged in alliances such as the Global Alliance for the Future of Food, the AgroEcology Fund or a German working group on agroecology.

Some concrete results
A major achievement is the support to national civil society coalitions. The choice to combine national with European funding was motivated by experience that European decisions are very much influenced by national positions. Financial and networking support therefore went into national civil society coalitions advocating for agricultural and food reform on both the national and European level. Fortunately, the countries identified as strategic were those in which member foundations were located – France, Germany, Italy, Poland, Spain. The success of the French civil society coalition highlights different positive experiences of EFSAF as well as putting the host of this year’s EFC annual conference centre-stage.

The French platform
Building on the experiences and networks of the civil society coalition PAC2013 created around the previous CAP reform in 2013, the organisations comprising Pour une autre PAC, launched in 2015-16, wanted to be organised in a more transparent and collaborative way, better resourced and more strategic. This aim coincided with EFSAF’s decision to support national coalitions. One French member supported the setting-up phase of the coalition on very short notice. Others later came forward with complementary funding. This collaboration and alignment of funding profited both the platform’s members and funder engagement in EFSAF. Moreover, the EFSAF connection brought strategic support and networking mainly through other national coalitions. There was also an alignment with the national political agenda in France. Pour une autre PAC both contributed to, and benefited from the work of a domestic coalition lobbying for agricultural and food policy reform.

The Atlas
Another product of the coalition is the CAP Atlas, a resource for awareness raising, future coalition building and potentially advocacy work. The Atlas is a fact sheet setting out 15 issues around CAP and will be published in early 2019 in six languages (English, French, German, Italian, Polish and Spanish), in variations adapted to the national – and, in the case of the English version, European – contexts and supported by national coalitions and partners. 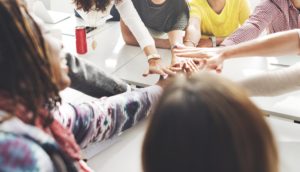 Building on the collective strength of members and partners; an aspect of funder collaborations such as EFSAF.

‘In any collaboration, individual commitment, strong coordination, chemistry of people and diversity of approaches need to be employed and respected if they are to add value when combined.’

With all this, EFSAF is at another crossroads. Members are keen to continue the collaboration. EFSAF has consolidated and is open for enlargement. An increasingly urgent political context sets the schedule as more and more actors see the link between agriculture, food and broader global issues like climate change, health, even populism. What route will EFSAF take next?

Some questions the group will answer in the coming weeks concern (i) its governance and structure including the question of whether to engage a paid coordinator, (ii) how to sharpen its identity while keeping its flexibility and allowing for growth. There will also be a review of the group’s focus on CAP which, while it is the stimulus for its work, also limits it and its outreach. It will continue exploring (iii) how to leverage more funds for the field and (iv) how to improve collaboration with civil society.

The main takeaway? In any collaboration, individual commitment, strong coordination, chemistry of people and diversity of approaches need to be employed and respected if they are to add value when combined. This takes time and energy, but it is worth it.