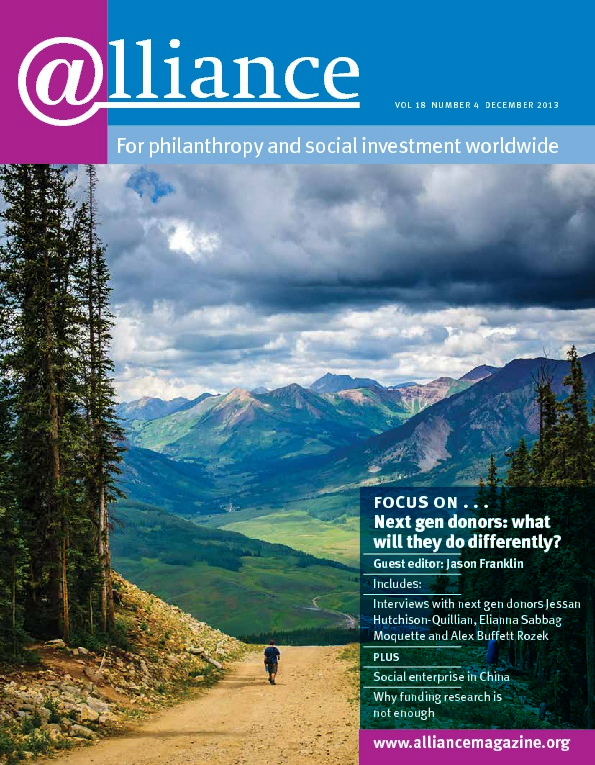 In 2011, philanthropy in China was rocked by a series of scandals, most notably that of Guo Mei Mei, a young woman whose parading of a ‘bling’ lifestyle while apparently associated with a highly respected charity became national news. While charities in China have since improved their standards of accountability, many donors are opting instead for direct giving via the internet and ‘sustainable’ approaches such as social enterprise and impact investment. Curiously, the true legacy of Guo Mei Mei (pictured below) may be that China is able to make a ‘generational’ leap towards these new forms of doing good.

To explore this hypothesis further, UBS has supported a major study undertaken with partners including the Social Enterprise Research Centre at Shanghai University of Finance, the Center for Civil Society Studies at Peking University, the 21st Century Business Herald newspaper in China and the University of Pennsylvania. Published in English just as UBS successfully launched its own US$50 million impact investing fund, this is the first comprehensive survey of the field undertaken by academics attached to leading Chinese universities. The Chinese version of the report was released at the Boao Forum for Asia in April 2013 in Hainan province in southern China, a major event attended by many senior figures from business, government and civil society in China.

The status of s

The first, and most successful, social enterprises have grown out of the welfare enterprise tradition. Of these, perhaps the best known is Canyou, headquartered in the fast-growing city of Shenzhen, an IT services company of which more than 95 per cent of employees are disabled. The founder of Canyou, Zheng Weining, started the company in 1999 with five disabled employees and one computer – ‘trying to divert myself from my own loneliness and provide myself with another way of living’. Now Canyou has 32 subsidiaries in 11 provinces, employing over 3,700 people and providing a full suite of IT services including animation design, system integration, business process outsourcing and e-commerce.

The outpouring of public support after the 2008 Wenquan earthquake also provided a spur to establish sustainable enterprises to bring long-term support to affected areas. One such venture is the Aba Qiang Embroidery Support Programme, which provides employment opportunities to craftswomen in a minority ethnic group facing extreme poverty. (Pictured: Peer-to-peer learning among Aba Qiang embroiderers.) Start-up capital for the venture came from One Foundation, founded by actor and martial arts star Jet Li. The first store for the venture, founded by couple Yan Junhui and Gao Tunzi, opened in the western city of Chengdu in 2010, with a total of 14 planned by the end of 2013.

Role of the internet
The biggest single spur to the development of new social enterprises comes through China’s enthusiastic adoption of the internet as its marketplace, meeting point and public square, with over 600 million users. One early example is ‘Free Lunch’, a programme set up by journalist Deng Wei to provide meals to poor rural children. Within a month, Free Lunch had received more than RMB1 million in donations from 100,000 online users. Pure online donation models have quickly evolved into social enterprise models. Buy42.com, based in Shanghai, is an example, based on mutual benefit (‘for two’) for buyers and sellers.

Inspired by charity shops in the UK, and China’s vast online marketplaces such as Alibaba.com, Buy42 allows people to donate and purchase unwanted goods via the internet. Facilitation of the e-commerce model is undertaken by disabled people, with net proceeds going to recognized charities and training and work placement opportunities for the disabled. In 2012, its second year of operations, Buy42 generated more than RMB 600,000 in contributions; it is launching a mobile app in 2013.

China’s online social enterprises are quickly growing in complexity and ambition. An example is the Zhihui Eldercare Cloud Service Platform, which currently has 1.4 million users. The virtual eldercare platform provides telemedicine monitoring for indicators for diabetes and cardiovascular disease via wireless-enabled sensors provided to users. Additional services include information about over-the-counter drugs, psychological support, and a ‘timebank’ allowing seniors to offer services to each other on a mutual aid basis.

Where is the capital?
Given that the first wave of viable social enterprises are emerging in China, the key question is where such start-up ventures can find capital. The report supported by UBS highlights the emerging universe of current and potential ‘impact investors’ in China looking to achieve social impact with their investments. These include domestic private foundations, which now number more than 1,500 since their establishment was liberalized in China in 2004. Government bodies, particularly at municipal level, are also actively providing capital for social enterprise investments, realizing the potential for these new models to fill the gaps in social welfare provision. In 2012, for example, the Shanghai Bureau of Civil Affairs and a related government foundation provided RMB5 million to establish the Shanghai Community Venture Philanthropy Fund. Major corporations are similarly looking at new models alongside traditional philanthropy. For example, Lenovo invested nearly RMB3 million in funding through its Second-Stage Venture Philanthropy Project, while Hainan Airlines has supported a social innovation competition with seed capital for social enterprises addressing social issues in Hainan province. Finally, there has been the emergence of domestic dedicated private equity funds and venture capital firms seeking social as well as financial returns.

An enabling environment for social enterprises
There has also been a proliferation in both the ‘hardware’ and the ‘software’ of an effective enabling environment for social enterprises. In a number of go-ahead locations, social enterprise industrial parks have been established with local government support, responding to the national call for increased social innovation. Examples include Zhongshan and Shunde in Guangdong, Suzhou and Shanghai. The social innovation centre in Shunde was developed using a government investment of RMB30 million.

Advisory firms with expertise in social enterprise and investment have also emerged. These include market intelligence and due diligence providers such as Shanghai’s Venture, as well as incubators such as Transist, Innovate99 and Youchange. A number of domestic and international organizations provide capacity-building services, including, most notably perhaps, the British Council, through its Skills for Social Entrepreneurs programme.

Challenges remaining
A number of key challenges remain before any kind of effective marketplace for social investments in China can operate. UBS convened an international panel of active impact investors to look at how China can accelerate its progress in this area. The panel identified key tools and policy levers that have been deployed in other markets globally. These included the establishment of incentive mechanisms to drive social innovation, such as social impact bonds, preferential feed-in tariffs for green energy, and layering of risk between public and private actors in investment arrangements. The panel also cited the creation of new legal frameworks for corporate forms for social enterprises and funding for government-sponsored pools of seed capital such as the Social Innovation Fund launched in the US in 2009. Also important is support for related academic research and knowledge-sharing platforms, as well as deploying the convening power of government to bring different actors together to catalyse new partnerships and solutions.

Overall, most panellists felt that China is at a relatively early stage of development for social enterprise and social investment, but also that it has demonstrated the capacity to catch up quickly, and indeed become a global leader in these areas. The key requirement is to promote broad acceptance of social enterprise and social investment in addressing China’s increasing social deficits. As Steven Ying, an impact investor active in China, argues: ‘For social entrepreneurs, they believe then they see. For most people, they have to see to believe. To strengthen the development of social enterprise in China, we have to bet on select social entrepreneurs and profile their successes. Their success stories would help people to see then believe.’

David Hayward Evans is a board member of the Lien Centre for Social Innovation in Singapore, and Head of Philanthropy and Values Based Investing, APAC for UBS.  Email david-h.evans@ubs.com

Waking up to risk taking in the global energy system