Peace in the new development agenda

Philanthropy can advance climate justice through the SDGs

Agenda 2030 – a set of Sustainable Development Goals and targets ratified by 180 governments on 25 September – charges businesses to work with civil society groups and governments – not usually considered natural allies. In the first of many Alliance online debates, we present two views of what sustainability will mean to philanthropy, corporations and other development partners. Watch for Alliance magazine’s December issue, which will explore Agenda 2030 in depth.

Beyond Declaration:Gearing up to for the SDGS

There is good reason to be proud and optimistic that UN member countries adopted the Sustainable Development Goals (SDGs) on September 25. The SDGs are the result of tough political negotiations and unprecedented civil society consultations, and for the next 15 years will set the framework and benchmarks for ending extreme poverty and securing a more sustainable future.

But as with all declarations – the real SDG work starts now – after the leaders have returned from New York City and are expected to translate words into action. This time we must not repeat one of the biggest shortcomings of the Millennium Development Goals: After they were signed off, it took several years to realign national priorities towards the MDGs. This time must be different and we must use all tools at hand to hold our governments, our leaders and ourselves accountable.

A circle of decision-makers from business, government and civil society from countries like China, Russia, Ghana, Tanzania, Turkey, Germany, Poland, Nigeria, Egypt and France, who had gathered in September at the 5th BMW Foundation Global Table in Tanzania, are proposing the following process to be started on the national level immediately:

The universal character of all these recommendations is only one side of the coin. What should not be underestimated is the critical importance of comprehending and accommodating specific local needs, as well as geographical and societal dynamics within the long-term SDG process. Only then can national and local actors adapt and prioritize approaches towards a more sustainable world. 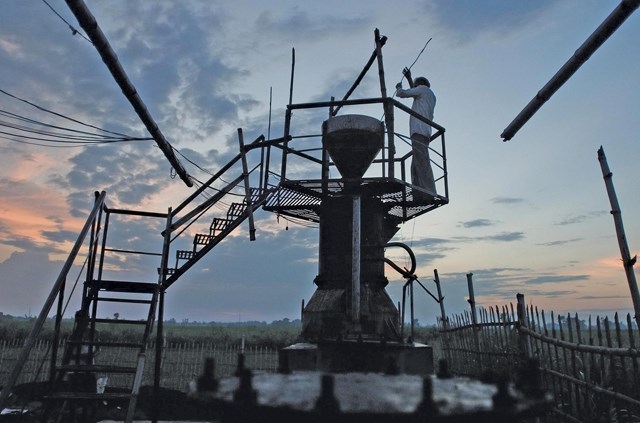 Founded by Gyanesh Pandey and Manoj Sinha, Husk Power’s gasification of rice husks to produce electricity has not only helped power previously off-grid Indian villages using renewable energy, it has reduced the pollution, illness and deaths associated with the burning of other fuels, such as kerosene for light and heat in those villages. It’s an example of innovation that does not consume useful resources and that also refocuses the local economy.

In a recent blog post on the Sustainable Development Goals (SDGs) (Beyond Declaration: Implementing the Sustainable Development Goals), the BMW Foundation observes that, ‘private business involvement is crucial to achieve the new development goals.’ It seems to me that are some latent conflicts within the goals which will mean that this ‘involvement’ should be nothing short of a thorough rethinking of what business does and how it does it.

One of the targets of Goal 8 — promoting sustainable economic growth, employment and decent work – for example, is to ‘sustain per capita economic growth in accordance with national circumstances and, in particular, at least 7 per cent gross domestic product growth per annum in the least developed countries.’

How is this to be reconciled with the goals concerned with the environment and climate change?

As long ago as 1972, the authors of Limits to Growth came to the conclusion based on computer simulations, that if present growth trends in population, industrialisation, pollution and food production, continue, the limits to growth will be reached sometime in next 100 years – with potentially catastrophic results.

As UK fund manager Jeremy Grantham succinctly put much more recently (the Guardian, 15 September 2014), ‘you can’t have sustainable growth forever. You can have sustainability forever, or growth for a few years.’

Get the message? The sort of economic development paradigm based on economic growth, the creation of jobs that produce disposable income and mass consumption, which has been the pattern in the West won’t do. We need to consume – and therefore produce – less.

This need to downsize will affect the labour market. Another trend pushing in the same direction is technology. In a review for the London Review of Books, John Lanchester cites 2013 research by two Oxford economists Frey and Osborne (The Future of Employment: How Susceptible Are Jobs to Computerisation?) who conclude that, in the next two decades, 47 per cent of jobs are ‘potentially automatable’. Pausing briefly to shudder at the word ‘automatable’ if not at the prospect of our future redundancy, let’s note two things that flow from this:

First, for those with jobs, in an economy where sufficiency rather than surplus becomes the end of wealth creation, people will need to look for satisfaction in the performance of their job, rather than seeing it as a means of producing the greatest surplus income possible. Second, if technological unemployment or underemployment happens on a big enough scale, societies may have – to quote an article in the Economist (21 August 2013)  – to rethink ‘a system that primarily allocates purchasing power via earned wages’. If this is to translate into general benefit (an adequate level of income and increased leisure) ‘a pretty hefty level of income redistribution’ will be required.

So what has this do with philanthropy? The short answer is that it has to do with everybody. It seems to me that if the desirable aspects of these projected changes are to be realized – an economic system in harmony with the natural world, the material and psychological welfare of all citizens adequately provided for – our expectations and the way we look at ourselves, our lives and our surroundings will have to change radically.

Obviously, many of the operational elements of these changes will depend on other agencies, like governments and business, but there will be plenty of work to go round. A few examples.

Funding experiments in new forms of business or economics.
Education is clearly going to be important in reconfiguring how people see the world. Philanthropy might champion new curricula in schools and universities to this end.

Foundations are always talking about their convening power. They might use that to bring together the public and private sector in working out new forms of service provision in which all sectors are involved. They might also help broker relationships between other sectors, on the one hand, and business – which is likely to find itself in an uncomfortable position – on the other and to mediate the confrontational element of those relationships.

Philanthropy could fund research into universal citizens’ income and how it might work.
….the list could go on. It’s hard to think of an aspect of life that won’t be affected and it’s likely that, whatever field philanthropists are interested in, they’ll find something to do. If we are to get a future along the general lines sketched out that’s more utopian than dystopian, it seems to me that far-seeing foundations and philanthropists should be thinking about these questions and getting ahead of the debate.

Two aspects of the role of philanthropy in this editorial resonate with me as CEO of the Lord Mayor's Charitable Foundation in Melbourne, Australia. Already we are funding more projects that are exploring new ideas in all our impact areas including affordable housing, opportunities for young people in employment, and sustainable food systems. We are also more and more engaged in collaborations and convening that cross sectors. I am part of a Transforming Housing project at the University of Melbourne that brings together local government, state government, property developers, architects and planners to work on new ways to increase the supply of affordable housing in Melbourne. Two weeks ago we ran a Seed Challenge looking for innovative solutions to providing employment for young people with disabilities - especially in future industries. Philanthropy has an important role to play in supporting the achievement of the new SDGs.

A watershed moment for African philanthropy