Within philanthropy circles, people are beginning to look beyond grants to the creation of a package of what might be called social finance, which will not only be bigger but will involve the kind of expertise traditionally considered the province of the financial industry. If the UN’s Sustainable Development Goals (SDGs) are to be achieved, massive sums need to be raised – the SDG Philanthropy Platform estimates a $2.5 trillion funding gap. How will foundations respond and what will the implications be for the character of future philanthropic institutions?

Much of the discussion that follows will focus on Asia, since the point of departure for this article is the prominence of the topic of impact investing at the recent Asian Venture Philanthropy Network (AVPN) conference held in Singapore. However, readers in many parts of the world will recognize the issues that impact investing throws up for devotees and sceptics alike. 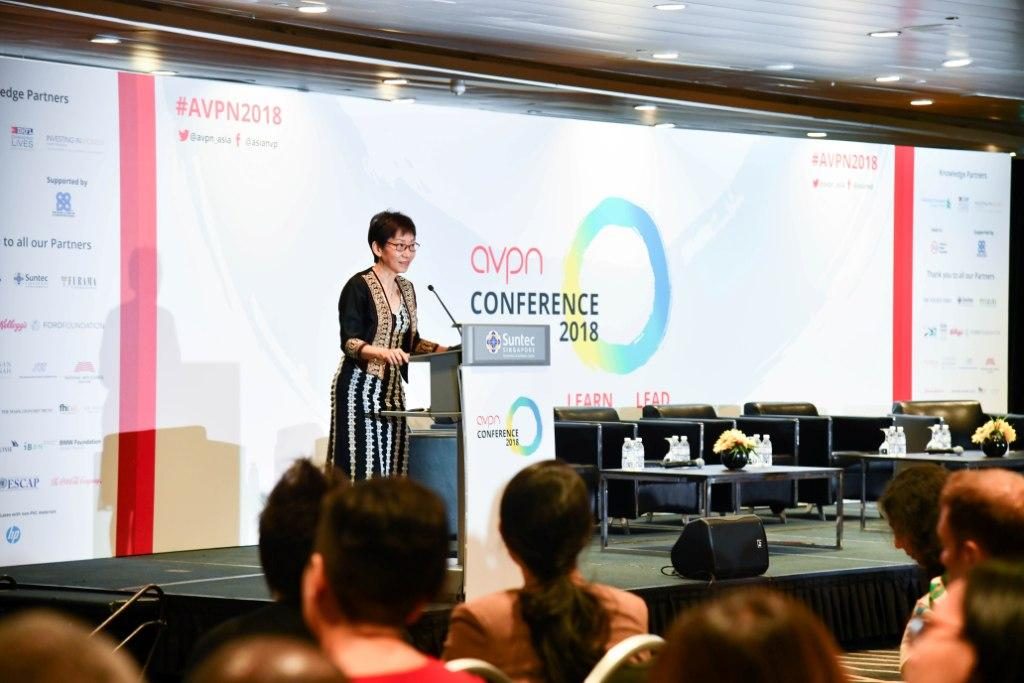 Singapore minister of culture, Grace Fu, during her keynote speech at the AVPN conference.

In any case, Asia is arguably the exemplar par excellence for the more varied use of capital for social ends. While much of the region is in the ‘emergent philanthropy market’ bracket, according to Karen Wilson of OECD, it is the most dynamic in the world when it comes to social impact investing, or SII as the OECD labels it. There are bills in the pipeline to support social entrepreneurship in India, Thailand and the Philippines. In Australia, the government of New South Wales has set up an office of SII. In Japan, the Sasakawa Peace Foundation (SPF) has launched an impact investment fund and the government is setting up a $150 million fund to support the development of the practice, while there are impact investing venture capital firms in Taiwan and Vietnam.

Speaking at the AVPN conference, Dr Ma Wei Hua of the China Global Philanthropy Institute noted that impact investing is gaining attention in China as it is internationally. Moreover, there are factors that make impact investment not only attractive, but imperative. Many problems facing Asian countries particularly are large, systemic ones such as education and healthcare, which require correspondingly large funds – therefore impact investment, with the possibility of drawing in more money than philanthropy can supply, looks a better option.

Many problems facing Asian countries particularly are large, systemic ones such as education and healthcare, which require correspondingly large funds – therefore impact investment, with the possibility of drawing in more money than philanthropy can supply, looks a better option.

While wealth has been growing in the region, AVPN CEO Naina Batra pointed out in an interview with Alliance that governments have been less able or willing to furnish the kinds of infrastructure which social welfare requires, especially where populations are growing fastest and urbanization is proceeding at breakneck pace.

Finally, the distinction between straight philanthropy and other forms of social finance is more blurred than it tends to be in Europe and the US. Institutional philanthropy is generally less well developed (it’s worth adding, however, that all ‘Asian’ generalizations are perilous). Other players have entered the field of social welfare provision who are more familiar with the idea of investment and to whom impact investing seems less of a conceptual stretch. The make-up of AVPN’s membership confirms this – it includes banks, family offices, private equity firms, advisers of all shades, as well as more recognizably philanthropy institutions.

The ‘left brain, right brain’ dichotomy
There are also obstacles, however, many of which are not peculiar to Asia, but would be recognizable the world over. Observers of the Asian scene point to what Naina Batra calls a ‘left brain, right brain’ attitude regarding grants and investments. Felix Oldenburg of the German Association of Foundations notes ‘mental and regulatory models’ that divide grant funding and investing.

The lack of intermediaries is also a generalized problem. Annie Chen of family office, RS Group, says that in Asia, particularly Hong Kong, ‘there’s not much of an ecosystem for impact investing’. Intermediaries linking the demand and supply sides (social banks, advisers and forums for knowledge exchange) are absent. Based on RS Group’s experience and observations, she says, ‘wealthy investors in Asia are not used to seeking out and paying for independent investment advice, and tend to rely on private banks to provide solutions. At the same time, very few private banks are able to provide relevant advice/products to those investors interested in sustainable investing.’ It could be that pressure will build to create the needed class of intermediaries.

Other challenges, too, would strike a chord outside Asia: measuring the impact of impact investing and pressing for a conducive regulatory environment. In most cases, says Oldenburg, government makes it hard to invest in impact but it should be making it hard not to invest in impact. 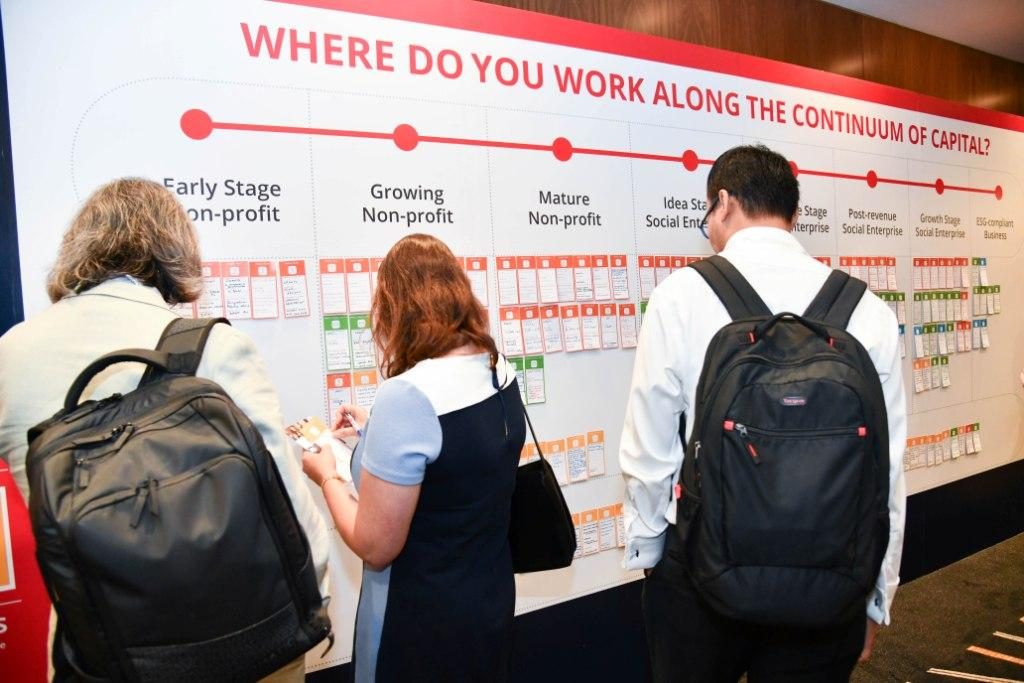 Impact investing was a key focus at the recent AVPN conference held in Singapore.

Where does philanthropy come in?
That said, Oldenburg argues that impact investing will soon be more important than grantmaking. It’s the kind of remark that makes foundations shift uneasily in their seats. Not only is the circle of those providing social finance widening, it can often seem that its centre is shifting. Many of those at the AVPN conference wondered whether the debate had strayed into a realm in which institutional philanthropy was only peripherally involved, where the real movers will be more mainstream capital providers.

It would be wrong to think in terms of a grantmaking/investing dichotomy. One is not better than the other; both have their use.

However, while foundations can, and arguably should, use impact investments, speakers saw plenty of scope for grantmaking, even in creating more favourable conditions for impact investing. Grants were mentioned as necessary to help develop the ecosystem – funding research and measurement of impact, helping create the intermediary infrastructure necessary, funding organizations until they could become investment-ready. One participant in an OECD-run workshop at the conference on SII observed that some investments need to be philanthropically funded because they are systemic problems and a commercial or commercial-like solution would raise political problems.

All driven by intention 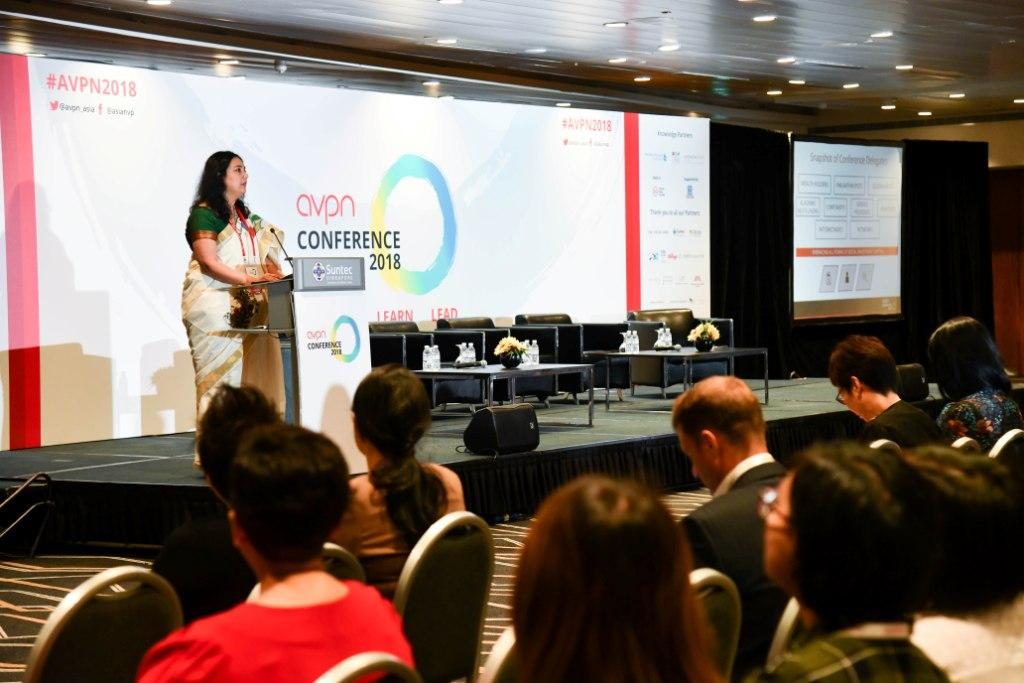 It’s obvious, however, that more than grants will be needed and that the focus of social finance is shifting towards investment. ‘Some things lend themselves to using market engines,’ says Chen. ‘For example, we need massive deployment of renewable energy in order to reduce carbon emissions, and you have to rely on the market rather than grantmaking to achieve that type of scale.’

But, again, she stresses, it would be wrong to think in terms of a grantmaking/investing dichotomy. One is not better than the other; both have their use. As AVPN’s continuum of capital concept suggests, all providers of social finance should be prepared to deploy what assets they can as and when necessary. ‘If you actually understood the capital continuum,’ says Chen, ‘then you would stop seeing the two things [grantmaking and investing] as “either/or” but rather as “both/and” – it’s about deploying all capital consciously and with intent.’

The future of institutional philanthropy
These developments may well have implications for organized philanthropy: how will it adapt to the new demands likely to be placed on it? No doubt the 12-year timeline of the SDGs will seem like the blink of an eye to those foundations set up to operate in perpetuity, though that blink is likely to be a crucial one. Do they need to rethink their relationship to development and to the use of their own resources? Will the foundation continue to be the predominant form of institutional philanthropy? RS Group provides an example of an organization which, while it makes grants, also aims, in Chen’s words to create ‘value across our entire capital base, rather than focusing on earning as much income as possible and then looking at what that can achieve’.1 She describes RS Group as a ‘100% impact investor, which looks at investing as a way to create good, not problems’. There are examples, too, in the West such as the LLC Chan Zuckerberg Initiative whose website describes itself as ‘a new kind of philanthropic organization’.

Even so, the amount institutional philanthropy alone can stump up towards the SDG price tag is limited. Pooled funds and tailored packages which combine different forms of finance are likely to be the order of the day. This was repeatedly assumed at the AVPN conference and the idea of collaboration is built into the SDGs. Foundations have traditionally struggled with collaboration, but to make the fullest contribution they can towards achievement of the Goals they may have to embrace new partners and learn a new language… and Asia may prove as good a place to learn it as either Europe or the US.