SVP donors give more and get more involved

This book is a follow-on from the excellent American Foundations: Roles and contributions, which is an edited collection of 18 essays by 26 leading foundation specialists. Although in many ways based on material from the previous volume, this book is very different. It sets out to consider ‘foundations as institutions in the context of their times and in the contexts of their communities’. 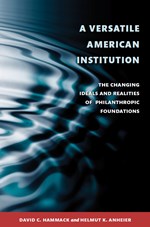 The book is very clearly focused on American foundations (with some of the mildly irritating assumptions that tend to go with that), but also describes itself as intended to have international interest and relevance. From a European perspective there are some fascinating and revealing ‘pearls’. For example, I have never before seen ‘lessening the burdens of government’ stated explicitly as a distinct charitable purpose. The debates over tax exemption in 19th-century America are interesting in light of today’s concerns: as the search for tax revenue increased, there was pressure on all types of property, including that of charities; although policies varied, states did generally exempt charities from taxation, but this was based not on how much a church or university was worth or whether it relieved government of obligations but rather on ‘whether its continued existence was desirable’.

Another gem for today is the story of Francis Jackson who, before he died in 1861, created a trust for the ‘preparation of books’ to ‘create a public sentiment’ that would lead to the end of slavery. When the trust was challenged in 1867 in Massachusetts, the court ruled that the trust was valid. Jackson also created another similar trust with the aim of securing equal rights for women. This trust was ruled invalid because the state’s laws did ‘not recognize the purpose of overthrowing or changing them’ as the legitimate purpose of a charity.

The first half of the twentieth century was what the authors term the ‘classic’ period of general purpose foundations in America. It was in this period that some of the greatest foundation influence was felt in shaping the pluralistic character of American life and institutions.  But, and here is another message for today, ‘Recognizing the limits of their resources, foundations rarely set out to substitute for government. Rather foundations complemented government, most often by demonstrating the value of particular activities’ – libraries, public schools, public health, universities and so on. It is also worth noting that foundations in this period of greatest influence ‘often embraced elitism as a necessary strategy. If they were to make a significant impact with their limited resources, they had to deploy them strategically, intervening to increase the capacities of the best and most influential researchers, institutions and policy innovators’.

In brief, Hammack and Anheier conclude that foundations were indeed important and effective institutions in shaping parts of American life up to the 1930s. By the end of the Second World War the glory days were largely over. It was not so much that foundations had become any less wealthy or focused but rather that their relative wealth and influence had declined. Yet, according to Hammack and Anheier, foundations themselves did not see this, and their critics reinforced the sense that they still wielded great power.

Foundations’ relative wealth and spending power, with very few exceptions, has now declined at the same time as rights have expanded. Furthermore, foundations today work in hugely complex systems and, arguably, in contexts in which the location of power to define public benefit and to take action to address it is increasingly diffuse and opaque. Perhaps one of the most important messages from this book is that when we look back to the ‘golden age’ of Carnegie and Rockefeller, Russell Sage, Guggenheim and the other great foundations, we need to be aware that we are measuring modern foundations against an inappropriate marker. Modern foundations do not achieve the spectacular gains of those institutions not so much because they are less ‘good’ or ‘talented’ but because the whole context, and the role of foundations within it, has changed.

The modern challenge, Hammack and Anheier argue, is for foundations to recognize those differences and limitations: ‘Foundations and regulators alike should, in our view, be careful to look below the surface of popular portraits of their achievements, keep in mind the intrinsic value of large numbers and diverse purposes of foundations, and take thoughtful account of current realities.’