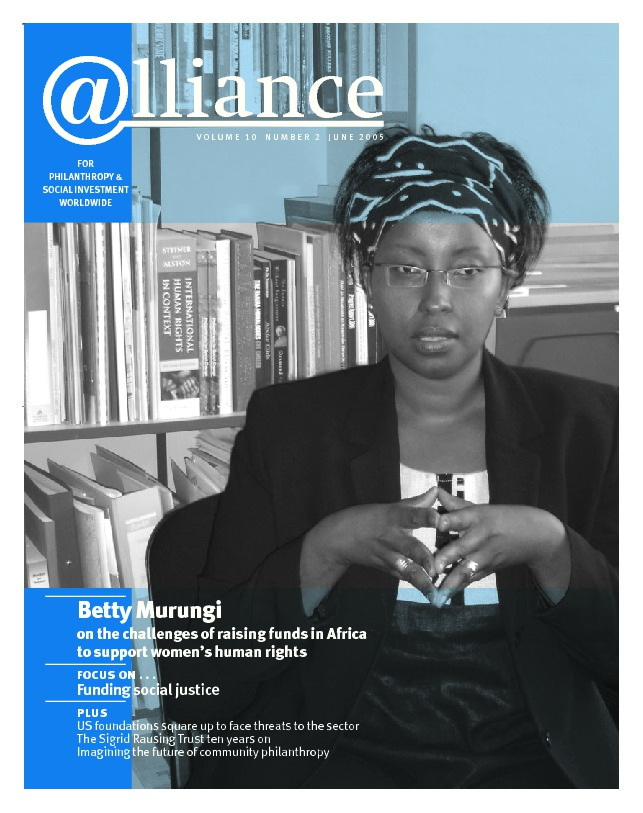 If Pablo Eisenberg plays poker I would bet his favourite game is five-card stud played straight. In his relentless and consistent criticism of 30 years of philanthropy, there’s no room for wild cards, there is only perfectly obvious wrong-headedness and failures of will and character along with an occasional and somewhat reluctant accolade. This is an absolutely terrific tirade of an authentic grump, and a wonderfully effective one at that. If that were all, the book would be well worth reading, but there is more to Pablo Eisenberg than complaint.

One’s overall feeling from the book is that Eisenberg is, mostly, dead right. What he says, and says over and over again, is that too many major foundations (and most philanthropy) lack courage, live well, are arrogant, do mostly irrelevant things, and most importantly do not address critical issues of equity and poverty in American society. At the same time, he accuses non-profit organizations of lacking the courage of their convictions, not having their act together, and allowing funders to bully them in directions they should not, and even do not want to, go. For Eisenberg, all of this is absolutely unacceptable. His basic criticism is that those who care deeply about important issues are not willing to stand up and be counted.

I have long been a fan of the regular and passionate flow from Eisenberg’s pen, even when I disagree. He is absolutely fearless and if he believes it to be justified will go after anyone, even icons like Peter Druker and Colin Powell – even potential funders of the National Committee for Responsive Philanthropy, the organization he founded, and the Center for Community Change, which he led for many years. It’s tough to get grants from those you just slammed in an Op Ed, but that’s Pablo!

And the dominant tone of the book is tough. Eisenberg demands high standards and has high expectations of excellence from those who run foundations and non-profits as well as from the boards of trustees and directors who have fiduciary and oversight responsibility for them. Those demands include ethical standards that prohibit conflicts of interest and any other violation of public trust, including excessive executive and trustee compensation. The essays in the book are full of reminders that the charitable sector is all about the common good, and for Eisenberg that means helping the poor and the disadvantaged.

Most of the 60 plus pieces in the book first appeared in The Chronicle of Philanthropy, and deal with a wide range of topical issues over the years like the William Aramony United Way Scandal or the legislative battle over private foundation payout. The book is roughly organized under the themes of philanthropic process, how best to help the needy, philanthropy’s global role, non-profit organizations and citizen advocacy, accountability, and role models. I say ‘roughly’ because Eisenberg more than most understands the intersections, the linkages, and the ambiguity between and among these areas.

The pieces I was most drawn to, and which make the book a must-buy for anyone who cares about this sector, are the longer essays: the introductory essay that looks both at the past and at the challenges of today’s non-profit world, and the concluding essay on the future of that world. His 1988 speech to the Northern California Grantmakers, Vision of Philanthropy: The challenge to foundation trustees is among the strongest articulations of his primary themes of the lack of vision, the neglect of the poor, the need to meet urgent public needs, ethical issues, and the insular nature of foundation practice.

You don’t get a lot of Eisenberg the person here except in the wonderful and lyrical section entitled ‘Role Models’ at the end of the book. In five essays, he memorializes Paul Ylvisaker, David Hunter, John Filer, James Patrick Shannon and John Gardner, who were extraordinary leaders and who Eisenberg admired deeply. He both mourns their passing and bemoans the fact that they are not being replaced today by people of the same intellect, passion and ethical commitment.

It was at that point that I realized that this book, written by a man who has been one of the non-profit sector’s great contemporary critics, is really aspirational. What Eisenberg yearns for is leadership because he believes that the non-profit world is the one sector in our society concerned with our humaneness, and it cannot do its job without leaders with heart, mind and guts. And he is right.

I hope that in future Eisenberg will go deeper and longer into the issues about which he is so passionate and the practical strategies to address them.

H Peter Karoff is the Founder and Chairman of The Philanthropic Initiative and the editor of Just Money: A critique of contemporary American philanthropy. He can be contacted at pkaroff@TPI.ORG

What If? The art of scenario thinking for nonprofits by Diana Scearce and Katherine Fulton