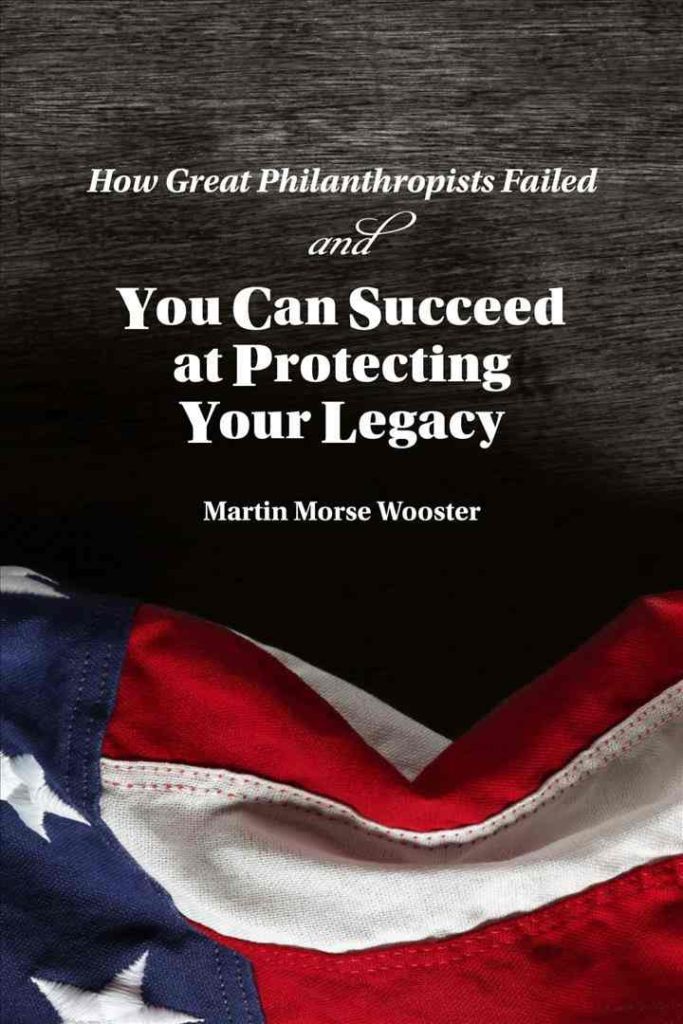 This is the fourth edition of a book that in the past had the title The Great Philanthropists and the Problem of ‘Donor Intent’.

No doubt, donor intent is a crucial principle in philanthropy. At Active Philanthropy we have explored the narrow line between clear and relevant donor instructions and donors leaving absurd or over-detailed statements of intent. Martin Morse Wooster explores in detail the perceived deviations from the intentions of donors by presenting nine case studies, from Rockefeller to Packard, on how donors, in his interpretation, ‘failed’ in establishing their philanthropic legacy. These ‘failures’ are followed by five supposedly successful examples, from the JM Foundation to the Hilton Foundation.

I found reading this book a cause of irritation. This was not because of the research presented by Wooster or the many, detailed, entertaining stories and anecdotes about entrepreneurs and donors he tells. Rather it was the insistent political undertone and the rather one-sided interpretation of success and failure in philanthropy. One example of this was the explanation of ‘social justice’ as ‘often a euphemism for government wealth redistribution’ in the case study on Carnegie. Equally grating was the criticism of climate change initiatives of foundations like Pew and Packard. In Wooster’s interpretation, these are all divergences from conservative donor intent to liberal action. Is the world really this black and white in philanthropy? It is stunning how the polarization of American society is reflected in this book.

Meanwhile, Wooster does not really address the cases of absurd, outdated or over-detailed donor intent. For example, he could have mentioned a Swiss foundation stating its purpose as providing the nuns and priest of the local Cistercian Monastery with one Schoggi chocolate egg filled with 300g of candies each Easter, or the Johanna Margaretha Eding Testament Foundation in Hamburg which was supposed to provide warm underwear for retired household matrons since 1762. There is a need for flexibility in the interpretation of donor intent as times and people change.

Wooster provides a concise summary of the many legal principles behind donor intent, like the ‘dead hand’ (mortmain) challenge in philanthropy. But I would argue with his interpretation of the ideal application of such principles in legal practice and also with his criticism of many courts in interpreting donor intent. I find it of help that, for instance, in the German discourse on donor intent, there is a growing concern with the foundation as a social and cultural phenomenon which cannot only be seen on the basis of legal principles. These societal measures, especially in a democracy, are crucial to the future legitimacy of philanthropy.

It may be ironic that in the end I actually discovered common ground with Wooster. His call for spend-down foundations or sunset provisions is one I share. Why? Because it allows donor intent and action now, but also because some of our global challenges are too urgent for us to wait until we have reached eternity.