Philanthropy In/Sight is a data visualization tool created by the Foundation Center in New York which maps the location of grants made by US grantmakers and the location of the grantmakers themselves. The creators explain that the tool is intended to enable users to visualize the spending patterns of private foundations and public charities.

Users can also filter grants by theme or sector, by funder, by year and by various socioeconomic categories (for instance, poverty levels of areas where grants are made). It has data on over 97,000 foundations and grantmaking public charities and more than 1.6 million grants made to approximately 150,000 grantees.

Does it do what it says?

Yes, it does. But the tool is about grants and geography: what grants were made, to whom, by whom and where. It does not allow the user to determine the impact of those grants nor does it claim to. Indeed, it would probably be impossible to include such a component if by impact we mean societal change.

The tool’s creators point out that it may be used to identify gaps in funding in certain thematic areas or places, and therefore identifies opportunities for funding. This is useful. On the other hand, it also helps smaller donors to ‘follow the smart money’. Those who want to invest in a certain field in a particular country, district or city can identify potential grantees by seeing who in these fields or locations received grants from bigger donors. It may be assumed that they carried out due diligence on the grantee and that they effectively ‘recommend’ them as good bets.[1]

The more complete the tool is, the more valuable it becomes and the coverage of 97,000 US grantmakers is impressive. But there are omissions. For example, we searched grants made in Africa over the last seven years by one small US foundation and only two grants showed up, though we know they have made over a hundred in one of those years alone. The Foundation Center explained that the reason for this is that there are certain size criteria which mean that many grants below $10,000 are excluded from the database. On the other hand, if small foundations were to report their grants electronically to the Foundation Center, it is probable that most grants over $1,000 would be included. While it is clearly a gigantic task to include all grants, even the smallest, their exclusion is a problem for organizations, such as the Bernard van Leer Foundation, which often works with small partners who will only have received small grants in the past.

The tool does not, nor does it claim to, include data on non-philanthropic multilateral and bilateral donors so it does not give a complete picture of funding in general. If that’s what you’re looking for, you need to complement this data with a much more tedious manual search of individual donor websites. 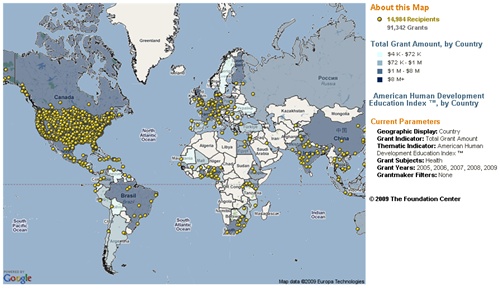 If extended to European foundations, would it be a valuable tool?

We think it would, including to us at the Bernard van Leer Foundation. It would allow users to do with European foundations (and other foundations worldwide) what they can so far do only with US foundations (though even that will be of some value to European users).

We believe that an important use of the tool, especially if extended to include European givers, is in undertaking situation analyses where there is keen interest in knowing which other donors are supporting what kind of work in particular locations, who the potential partners are, where they are and the experience they have of managing different sizes of grant, whether they have a broad funding base, who the potential donor partners are, and so on.

One of the most attractive features of Philanthropy In/Sight is being able to use it to drill down into the grant data to make socio-economic analyses of the areas in which the grants were made. To allow this, the tool draws on a variety of reputable data sources. It is unlikely that there will be comparable sources in the majority world so it will never be possible to do the level of analysis that is done in the US (eg how many grants were made in Kenya that were given to communities whose average income is above a dollar a day).

We are writing from the perspective of a foundation which makes grants to partners in the field (largely in developing countries) to support work with and for young children. No doubt there are other perspectives on the usefulness of such a tool from philanthropies with a different focus and organizations within the philanthropic world which are not donors (like support organizations). For these reasons, the tool is likely to have more applications than those identified in this short review.

When trying out the tool we found that our own area of work, early childhood development, was not included as a theme by which grants could be filtered. While the present themes are good in their coverage of broad, major areas, many foundations, such as ours, would find it valuable to be able to make more specific thematic searches. [2]

It would also be helpful if it were possible to distinguish clearly the different sectors of grant support, such as health and education, on the same map (through, for instance, colour coding) rather than lumping them all together or requiring one to make separate searches for each sector.

We have some qualms about the cost of the annual subscription which, at a minimum of US$1,495 (for a single user) is likely to put it beyond the reach of smaller foundations. It would be worth devising a sharing mechanism of some kind to ensure these potential users are not priced out.

Fortunately there is a feedback section on the In/Sight website where the Foundation Center is looking for comments to help it improve the tool.

Overall, the Philanthropy In/Sight tool is a welcome and valuable innovation which allows grant analyses which will assist foundations and associated organizations in their efforts to track grantmaking patterns, improve their grantmaking and direct it to areas where it is most needed. The tool has been developed in the USA and has an impressive database. If this were extended, especially by including European and other foundations throughout the world, it would become an essential grantmaking tool at global level.

1 This last point is made by Sean Stannard-Stockton in his blog at http://tacticalphilanthropy.com/2009/07/philanthropy-insight-mapping-foundations

2 David Clark from the Foundation Center has pointed out that it is possible to filter grants by early child development, which the review mentions under ‘Any recommendations’. The Grant Subjects filter is a three-level hierarchy, and each of the levels can be accessed by clicking the plus sign next to a category name. So the user would click the plus sign next to ‘Education’ and then the plus sign next to ‘Elementary/Secondary Education’, and then they would select the term ‘Education, early childhood education’. This is where early childhood development grants would appear. In all, Philanthropy In/Sight’s taxonomy includes over 1,100 specific subject terms so that users can customize their maps very precisely.

Reinhard Skinner is Monitoring & Evaluation Officer and Selim Iltus is Studies & Research Officer at the Bernard van Leer Foundation in The Hague, The Netherlands. Emails reinhard.skinner@bvleerf.nl and selim.iltus@bvleerf.nl.

The authors would like to thank their colleague Mrs Nyambura Rugoiyo, Programme Officer, for piloting the tool with them and providing comments.