What we can learn from the latest International Giving trends?

Foundation giving in the UK grows for fourth consecutive year

The evolving role of corporate foundations in the innovation space

The Charities Aid Foundation (CAF) has now released almost ten years’ worth of data on giving behaviour via its World Giving Index (WGI). The findings of this index ignite conversations about giving and generosity in different countries throughout the world. 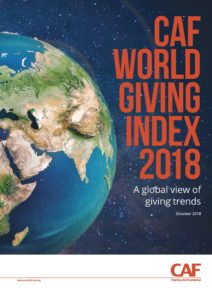 Respondents are asked three questions on their giving behaviours; from whether they have helped a stranger, donated money or volunteered their time.

Based on data collected over a five year period (2013-2017), the top five most generous countries are:

These surveys allow for readers to compare the data over time and look at any global patterns. CAF & Alliance therefore brought together a roundtable in London to discuss the trends and philanthropic insight within nine commissioned reports this year: Australia, Brazil, Bulgaria, Canada, India, Russia, South Africa, the UK and the USA.

An insightful presentation by Ben Russsell, Director of Communications at CAF, summarised the findings. One of the biggest themes to emerge was in how much women and young people are leading the way in various measures. Youth are now predicted to have a profound effect on fast-growing economies. The 18-25 age group is dominating in volunteering and civic engagement, and women are more likely than men in many countries to volunteer.

The impact of charities is felt globally, and is felt to have a positive influence on respondents’ countries as a whole – particularly in South Africa, where 80 per cent of respondents believe this. Conversely, Russell states that work needs to be done to ascertain what is behind the falling trust in charities within the UK.

Russell also demonstrated CAF’s look to the future. In looking at global estimates for the middle class population around the world, CAF estimated what their income would be at 2030. CAF then asked what would happen if people gave that disposable income to the extent that the UK does, and came to the figure of $319 billion annually. A change at this scale would have a profound effect.

Of course, the picture is much more complicated than that, and this year new and exciting research projects in East Africa, supported by The Mott Foundation, Aga Khan Foundation and the National Lottery Community Fund.

It is important to not spread South Africa’s increase in individual giving as an indicator of the continent of Africa’s giving trends. Others agreed that it is more important than ever to develop our understanding of giving in these countries.

Once the presentation ended, the floor was opened up to questions. Eugenie Harvey, Chief Executive Officer at The Funding Network, asked Russell for ‘clues’ as to who the top five most generous countries are this year. Russell replied enigmatically that the data isn’t fully in yet, but that there could be a big change from ‘the usual suspects’.

Itır Erhart, Associate Professor at Istanbul Bilgi University, asked about how to work around attitudes toward this giving survey. Particularly within Turkey, Erhart claimed that ‘they don’t trust this data; we are always challenged.’ Russell responded that this is something asked a lot about the WGI, and that they don’t try to correct factors that exist locally when asking these questions. People will respond to the questions differently, and that the point is to start a conversation, with a view to perhaps more detailed research later down the line. ‘Giving is an under-researched phenomenon globally,’ Russell said. ‘We’re trying to do what we can to increase our understanding of that.’ 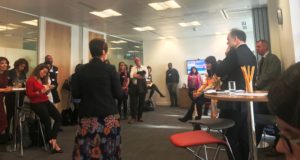 ‘A person is a person because of other people’ Gill Bates, CEO at CAF Southern Africa discusses the findings of the 2019 South Africa Giving Report.

Antony Shaw, Strategy Advisor for Zambia Business Club, asked whether impact investing is driving money away from conventional giving. Russell gave the honest answer of not knowing; producing the UK Giving Report has created a lot of discussion around whether crowdfunding was driving money aware from what would be more formally considered as ‘charitable giving’, and that this was a factor that CAF would continue to look at.

At this point Michael Mapstone, Director of International at CAF, brought in more of an overview from the Global Alliance partners present. Mapstone mentioned that one development to shine through is South Africa‘s bucking of the West’s trend in declined giving, and instead is on the rise. Gill Bates, CEO at CAF Southern Africa, was asked to speak.

Bates explained the South African term of ‘ubuntu’, which translates loosely into ‘a person is a person because of other people’. Bates then referenced what’s known as a ‘black tax’, whereby families in South Africa have a strong link to household giving. From food parcels to donations to seeing children through school and university, this form of giving thrives even as South Africa has growing unemployment levels and is declared one of the most unequal societies in the world.

‘Business has a massive role in employing people and creating both the wealth and the opportunity to give, as well as encouraging people to consider the world outside.’

Paula Fabiani, Chief Executive at IDIS, spoke of the economic volatility experienced in Brazil. Giving has reflected the election – ‘the country is concerned about itself, unemployment has increased and the people are looking for alternatives on an individual basis, rather than through the collective banner men of society.’

Maria Chertok, Director at CAF Russia, posited that it would be a big error to underestimate giving if we were to only count what is given to ‘organised charities’. In Russia, Chertok explained that informal activity through varied avenues like volunteer groups, going to orphanages, animal welfare and environmental concerns were not always through registered charities. CAF Russia brought Giving Tuesday to the nation, and this itself is an informal movement. ‘We need to be sensitive to the growing, informal activities of citizens. If we only stick to registered charities, we are losing a lot of the big picture.’

Chibwe Henry, Partnership Manager for DfID: Government-funded Partnerships at Comic Relief, made the point that it is important to not spread South Africa’s increase in individual giving as an indicator of the continent of Africa’s giving trends. Others agreed that it is more important than ever to develop our understanding of giving in these countries.

‘For small communities and nonprofits that rely on small donors, our concern is that we’re going to see a lot of charities go into bankruptcy… but the aggregate numbers for giving are up.’

Robert Alleyne, Audience Strategist at Comic Relief, asked about the gap in money going to charities and solving issues, what role business has in filling this. Russell responded that the WGI measures individual responses, so these results are very much from that perspective. ‘Business has a massive role in employing people and creating both the wealth and the opportunity to give, as well as encouraging people to consider the world outside.’ Russell went on to explain that in many countries there is a strong interest in corporate giving, not least to improve any countries in which these ‘corporates’ operate. Russell gave the example of payroll giving in the UK that facilitates this.

Lisa Grinham, Chief Executive Officer at Good2Give gave the example to the room of her own native Australia, where there are some quite big initiatives coming out of the federal government. Grinham explained that there is a ‘certain expectation and pressure for corporates to be more generous in giving’. 78 per cent of people in Australia expect their employer to stand up on issues which they perceive their government to be failing on – Grinham gave the example of marriage equality. Whilst this started as a grassroots movement at the philanthropy level, it was ‘pushed over the line’ by corporate Australia.

‘we can see the children who 10 years ago started to volunteer with their families, are now becoming young givers. The children are growing up and becoming more responsible, bringing practices from their university years within other countries.’

John Low, CEO at CAF, spoke to the room on how opportunities which encourage workplace giving schemes can be powerful in engaging local communities. Meenakshi Batra, CEO at CAF India, told of the strong Indian tradition of giving by corporates.

Ted Hart, President and CEO at CAF America, explained the effects within the charitable sector from the ‘sweeping redefinition of our tax code’ that was passed in 2017. Reports have shown that a tax deduction doesn’t inspire people to give, but it does define how much they give. At once disincentivises the middle classes and removing their charitable tax deduction, Congress has also given more incentive to the ‘super wealthy’. This has led to the predictable outcome of the wealthiest giving more and those of the middle and lower class giving less. ‘For small communities and nonprofits that rely on small donors, our concern is that we’re going to see a lot of charities go into bankruptcy… but the aggregate numbers for giving are up.’ 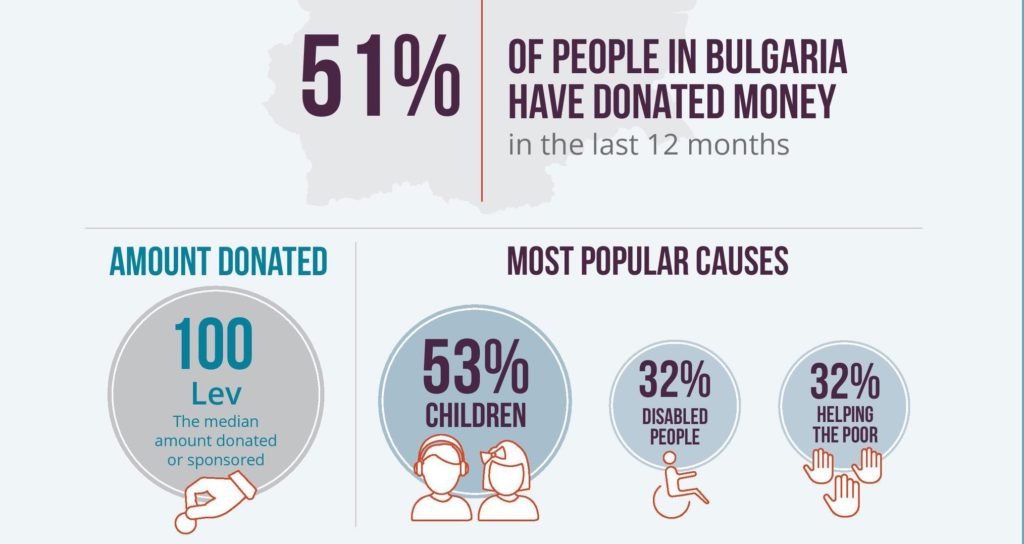 Elitsa Barbakova, Executive Director at BCause, told the room that although she believes the three questions to be ‘too simple’, the survey has also helped guide the respondents to see the variety of ways in which people can contribute. Bulgaria has had 30 years of democracy, said Barbakova, and ‘we can see the children who 10 years ago started to volunteer with their families, are now becoming young givers. The children are growing up and becoming more responsible, bringing practices from their university years within other countries.’

Rachel Knight, Head of Trusts and New Markets at ActionAid, asked Ted Hart whether the US and Canada were too often ‘lumped together’. Hart replied that the vast majority of the Canadian population lives within 50 miles of the US border. One key difference, Hart explained, is that we do see slightly more corporate giving in Canada overall; whilst corporate giving is often exploded across headlines in the US, it is in fact less than 10 per cent of giving. For the latter, the vast majority of giving is by individuals.

Alana Crisci, Philanthropy Manager at Save the Children, concluded the roundtable by asking for more research to be done on diaspora giving within nations. Crisci called for data on how diaspora communities give back domestically, and to look at those who don’t, as it is an important topic to talk and think about.

CAF’s World Giving Index provides unique philanthropic insight into giving behaviours around the world. As the globe appears smaller and problems never more pressing, it is important to look at levels of human generosity and to understand exactly where the sector is, and where we can go from here.

Amy McGoldrick is Marketing and Advertising Officer at Alliance magazine

I was interested in the wide discrepancy between your list of countries where individuals give most and those in which states give most, as seen in https://fullfact.org/economy/uk-spending-foreign-aid/. The difference, e.g. for USA and Ireland, suggests an inverse relationship. A statistical comparison could be interesting. Though I have hitherto rejected the common statement that "charity begins at home", I now wonder whether some of taxpayer resentment of giving in overseas aid in any way correlates with states of poverty at home. CAF information on these points would be welcome.

Coverage from Council on Foundations’ Leading Together Conference 2019