Foundation giving in the UK grows for fourth consecutive year

Foundation giving reached £3.3 billion in the last financial year, according to new research published today by the Association of Charitable Foundations, an increase of almost 11 per cent. 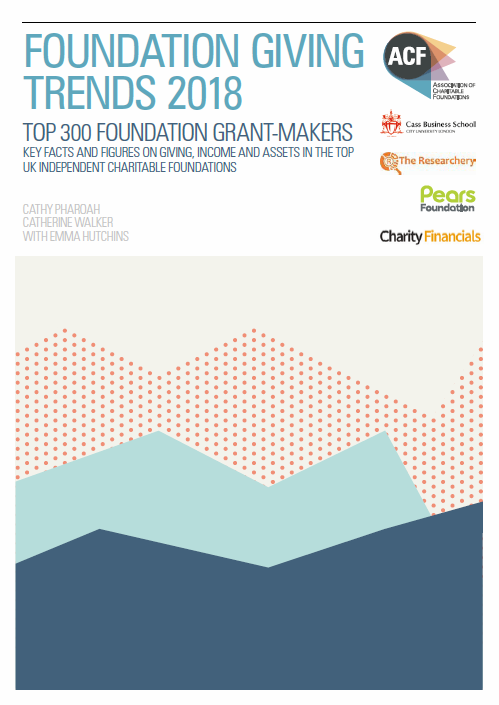 The findings come from Foundation Giving Trends 2018, the latest edition of the annual report on the finances and funding of the top 300 UK independent charitable foundations by grant-making.

63 per cent of foundations increased their grant-making in real terms in 2016/17 on the back of growth in income and/or assets. Income from donations and investments both grew by around 10 per cent, while average asset growth of 5 per cent shrank to 2.5 per cent after excluding the giant Wellcome Trust. The report also details trends among family foundations and corporate foundations. Family foundation giving totalled more than £2 billion, while corporate foundation giving shrank slightly this year to £228m.

Place-based giving initiatives are the focus of a special feature demonstrating the wide range of approaches taken by foundations of all sizes to deliver holistic and collaborative solutions rooted in a local area.

ACF Chief Executive Carol Mack said: ‘This year’s research once again demonstrates the strength and resilience of the foundation model, achieving record levels of giving despite a challenging social and economic environment.

Foundation Giving Trends is a hugely valuable source of data for foundations, policy-makers, and academics alike, providing an evidence base that year-on-year tracks the vital contribution that the sector makes to the health and pluralism of civil society.’

Professor Cathy Pharoah, Co-Director of the Centre for Charitable Giving and Philanthropy at Cass Business School, said: ‘This latest research in the Foundation Giving Trends series shows a vibrant and diverse sector which is continuing to grow, and that foundations are swiftly passing on income or asset gains to beneficiaries.’

In the tenth year that Pears Foundation has funded research measuring the contribution of family foundations, the finding that giving from this group has now surpassed £2 billion demonstrates the growth that has taken place.

Dr Cat Walker from the Researchery said: ‘The report demonstrates how foundations have a leading place in taking forward place-based initiatives and contributing to current debates among policy-makers on strengthening local communities.’