‘How many people here don’t have their smartphone within easy reach?’ asked Ong Peng Tsin, Chair of Solve Education in the opening plenary of this year’s Asia Venture Philanthropy Network (AVPN) conference in Bangkok, 7-9 June 2017. Only one hand out of 700 went up. Mine. Most of my fellow delegates inferred from this – correctly – that I don’t have one. This is neither a source of pride or shame on my part but I say this for two reasons, one trivial and the other serious. Let’s start with the trivial one. It helped me stand out. A number of people subsequently recognized me as THE exception. More than anywhere else, if you don’t have a smartphone in South East Asia, it’s as if you’re from outer space. Even Buddhist monks seem to have them.

What is the serious issue behind this? If Asia is to develop what Ong called a ‘knowledge economy’, it needs knowledge workers. Yet, despite the Millennium Development Goals, he said UNESCO estimates that 263 million children don’t go to school.

How can you reach these school-less children? 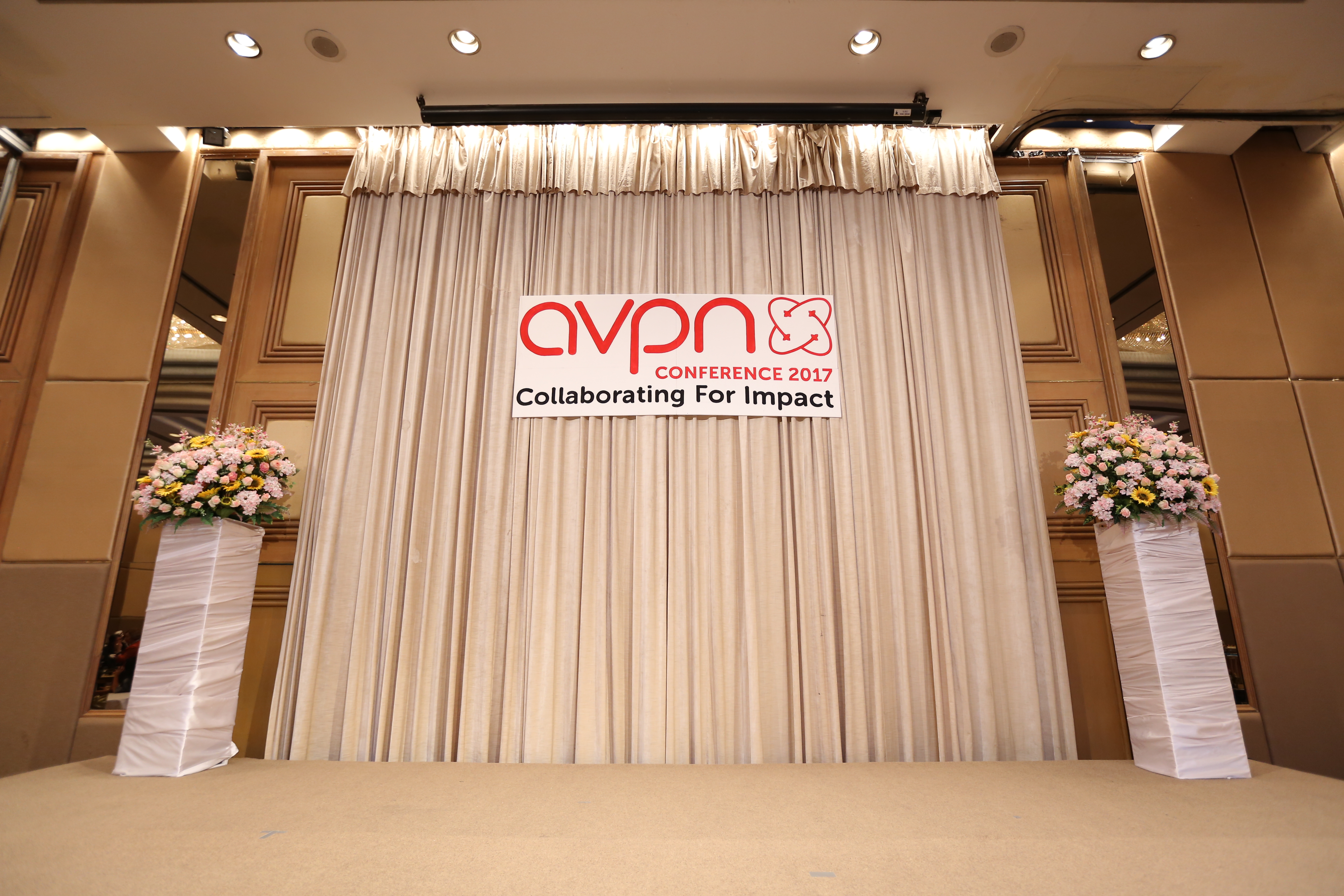 Smartphones are often the major purchase many poor people make, especially in the developing world. He urged delegates to come together to find solutions including by making current educational apps better adapted to the intermittent connectivity common in developing countries.

In many ways, this session signalled some of the major themes and characteristics of the conference: the potential for mobile technology to be a springboard for development in the region, a strong focus on education and the will to work together to find solutions – the conference title was, after all, Collaborating for Impact. 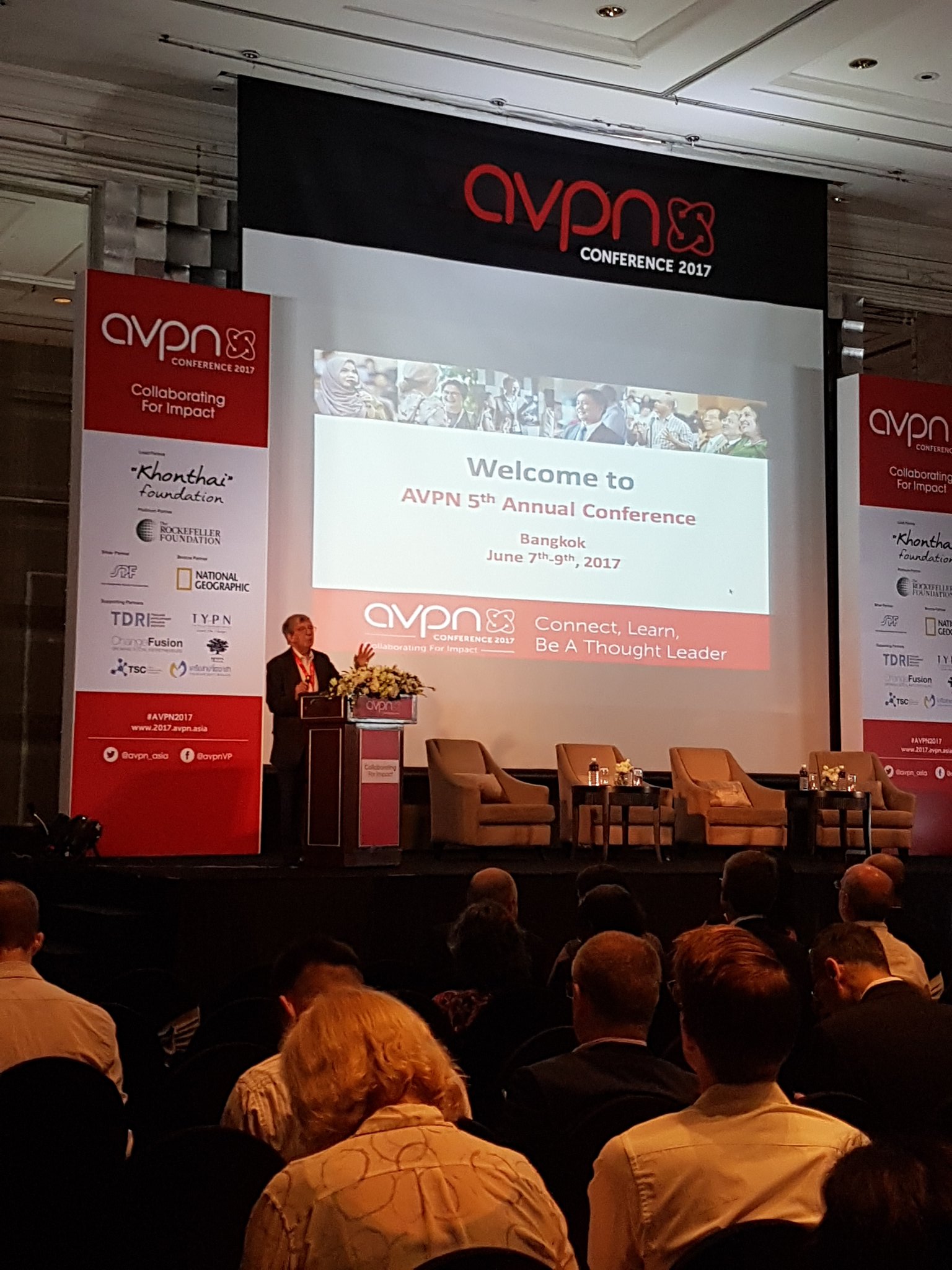 Doug Miller, AVPN’s Chair, had promised I’d find it a dynamic organisation and he was about right. Membership, growing at the rate of around ten a month, is now up to 370 and at 700 delegates, the conference was a whopper.

For the first plenary, extra chairs were hastily brought into an already-capacious main conference hall. This dynamism was mirrored in the proceedings. There was a life, almost an exuberance, about it you don’t often find at conferences.

Maybe it was something to do with the mix of people: bankers, finance professionals of all stripes, donors, NGO representatives, officials, consultants and the assorted flotsam, like your correspondent, who always wash up at these events, all rubbed shoulders in imposing conference rooms where the air conditioning was so vigorous that you put your jacket on when you went inside, and took it off again as promptly when you went out into the broiling heat of Bangkok.

Throughout, there was a willingness to talk and to meet that often took precedence over the formal conference sessions. This happens to a lesser degree at other conferences, but usually towards the end when either session-fatigue is starting to set in or when mutual interests are beginning to crystallize.

Here, at the end of the very first day which featured a plenary panel and a short address, the hall which in the morning had been full to bursting, was half-empty. Well, it had been a long day. The man behind me snored gently and a few others had their heads down (although they may have been communing with their smartphones, of course).

Yet, it wasn’t the dullness of the session that caused this mass absenteeism. The volume of conversation from outside in the foyer made it clear that real life was elsewhere. In some ways, it was a pity because Roopa Kudva of the Omidyar Network talked about how India has become a regional hub for impact investing through the spread of technology, especially mobile technology, a developing ecosystem for entrepreneurship and a more strategic approach to philanthropy.

She was followed by the launch of AVPN’s new report, The Social Investment Landscape in Asia which found a similarly encouraging picture for the region in general, with more interest in collaboration, more interest in venture philanthropy techniques, greater government support for the social economy and a corporate philanthropy better aligned with the region’s needs. 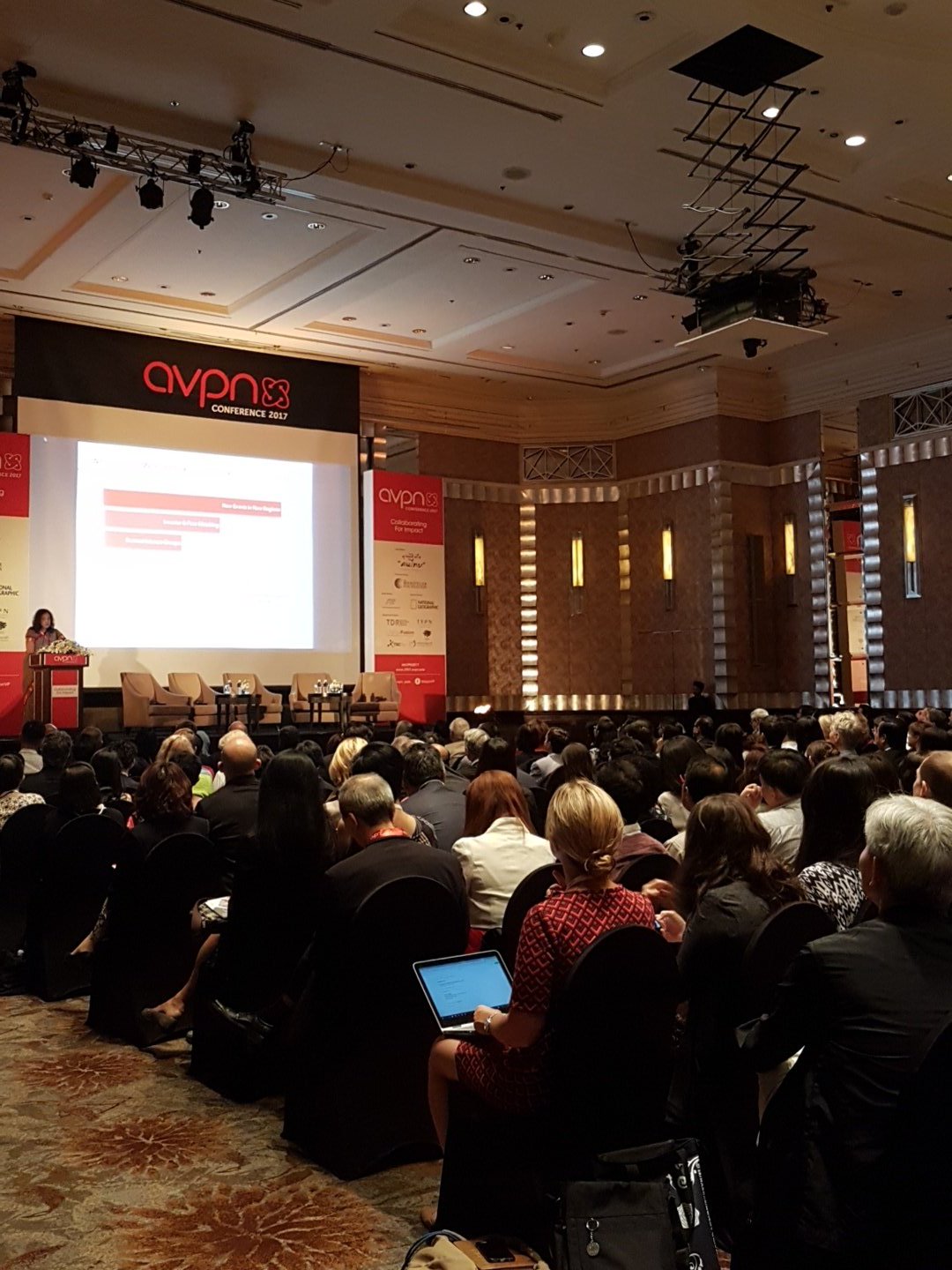 This pattern – non-attendance of the last session in favour of side meetings – was repeated on the two succeeding days (incidentally, none of the speakers seemed to mind addressing a half-empty room) and sheds light on the real significance of AVPN. CEO Naina Batra called it the ‘only platform for advocacy and capacity building’ for the social sector in Asia and for most of the delegates I talked to, it was a network first and a forum to discuss venture philanthropy second.

In short, it’s a key piece of infrastructure in a region where infrastructure is scanty. It’s worth noting in this connection the AVPN conference app had registered 5294 contacts made. Presumably, the number of informal connections far exceeded this.

So there was a lot of talking, but behind it, you could sense a readiness for action, a suppressed ‘can’t-wait-to-get-at-it’ spirit which really animated proceedings and, in keeping with this spirit, delegates were urged to put their hands in their pocket there and then through the Deal Share Live session – organisations ‘pitched’ their initiatives for seven minutes to the audience, asking for a specific amount of money, and were then endorsed by an AVPN member which was already supporting them. Projects ranged from low-cost housing in Vietnam, provision of teachers to schools in low-income areas of Thailand and the manufacture of eco-friendly bamboo toothbrushes.

Gender and climate on the agenda
As to the conference content, there were a number of the themes you’ll have met with before: education and technology have already been noticed and healthcare featured strongly, none of this very surprising given the challenges that Asia is facing. Scale, social enterprise, tailored financing, social value creation were terms which resounded through the proceedings which is also to be expected.

More unusually at a venture philanthropy conference, there were sessions on the challenge of caring for an ageing population and a strong theme of investing with a gender lens, in fact, as one participant pointed out, this is the first AVPN conference to have a focus on gender issues.

The timing could hardly have been better. Shuichi Ohno of the Sasakawa Peace Foundation (SPF) in Japan announced at the conference that SPF is launching an impact investment fund which will focus on gender issues, the first social investment fund in Asia to do so. We are at a major turning point in philanthropy, he argued.

First, we are reaching the limits of traditional grantmaking, because it creates dependence among grantees. Second, we are seeing the rise of new stakeholders in the social change arena, with the emergence of social enterprises and of experienced financial professionals, and third, the global financial environment is changing. We live in a low-interest world, so approaches to foundation investments have to be rethought. 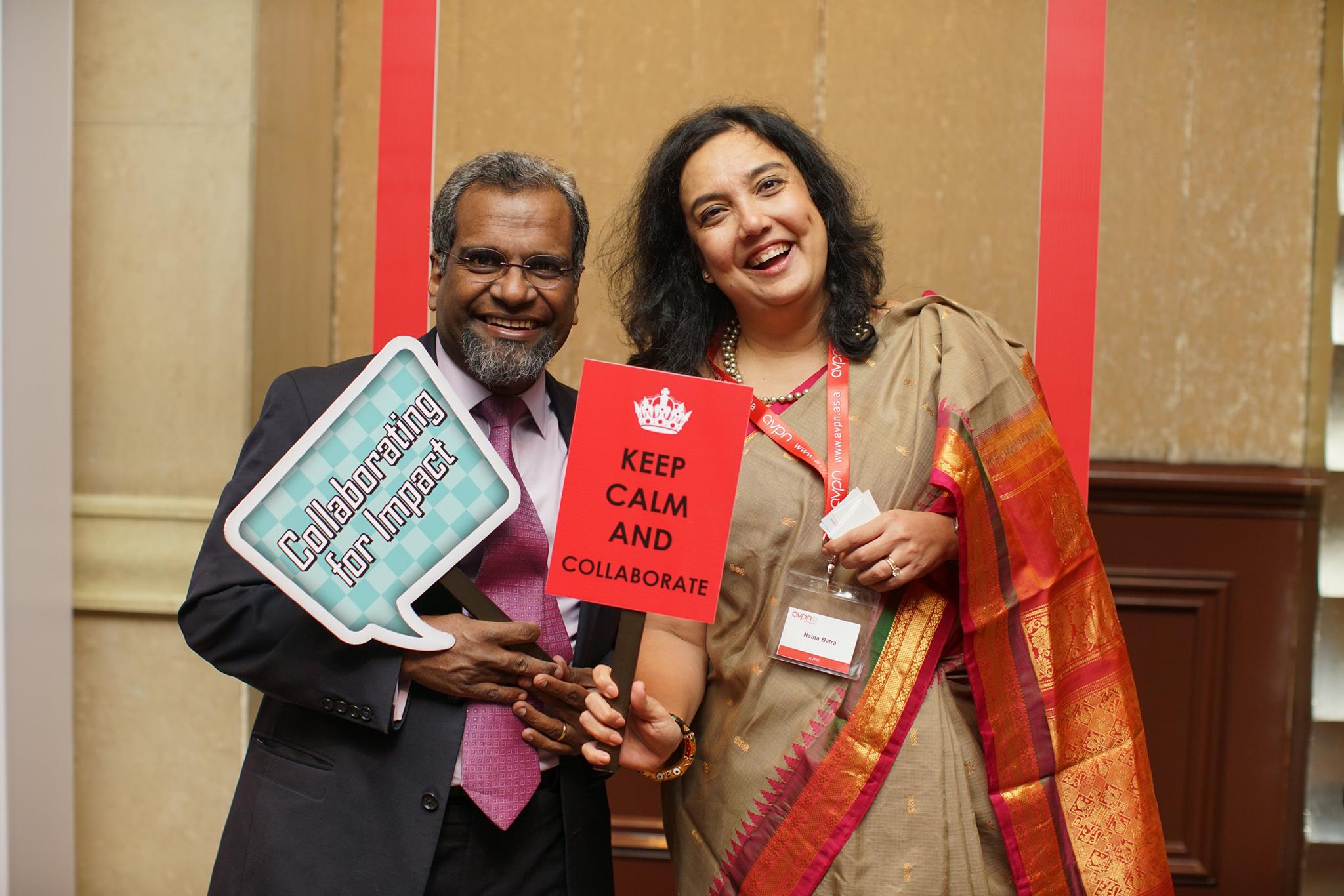 The response of Ashden in the UK is to make early-stage grants as a form of patient capital for innovation, said Chhavi Sharma, to de-risk investment in innovation and to foster public-private partnerships.

Zhang Ruiying of the China Foundation Center sees philanthropic money as a tool for influencing policy, but with little money, you have to choose your points of intervention carefully. China has a growing foundation sector, she said, so climate change is getting more attention from the sector, but…out of six thousand or so foundations, only a few work on climate change, so if they are to make a dent, they will need to work in alliance.

Stand out sessions
There was no shortage of choice even with the attention of 700 delegates to hold.

It was refreshing to go to a session on Next-Gens Collaborative Investment in Nature, co-facilitated by the founder of the Thai Young Philanthropists’ Network, where groups engaged in discussions at their tables and then presented the results to whole room.

Another that stood out for me was on regional grantmaking (coincidentally, one of the few sessions where grantmaking featured in the title – or indeed in any other part of the session.

Nicola Crosta of Epic Foundation argued eloquently in favour of unrestricted funding for supported organisations and provocatively in favour of ditching the ‘monitoring and evaluation’ tag. They’re two different things, he said: monitoring is about tracking, evaluation about analysing impact. Unrestricted funding is the only kind Epic gives. ‘We fund the organisation, not the project,’ and apply a simple test – is the organisation as good, or better, than it was when Epic came in?

Another absorbing discussion was a plenary session on the continuum of social investing. What’s the balance between financial and social return? For Charly Kleissner of Toniic and a successful entrepreneur, that’s the wrong question. The right one would be, what’s the impact you’re looking at and, if you’re to achieve it, what if any is the appropriate level of financial return? To put it the other way round is to use the language of a ‘dying system’.

Similarly for Manoj Kumar, CEO of Social Alpha, an organisation set up by the Tata Trust in India, the financial return is the financial sustainability of the organisations they support. Impact investors in India are small. Who will fund worthwhile and necessary developments, scientific and technical innovations with a high level of risk for an unknown return? ‘We will.’

The panel generally agreed that lack of research and data were imperative for the field to move forward quickly. For Annie Chen of RS Group, this would disarm the scepticism she encountered among her colleagues and trustees, who objected that she was screening out good investments by applying a social value test. ‘I say to them: “we’re not screening out investments, we’re screening in good investments.”’ 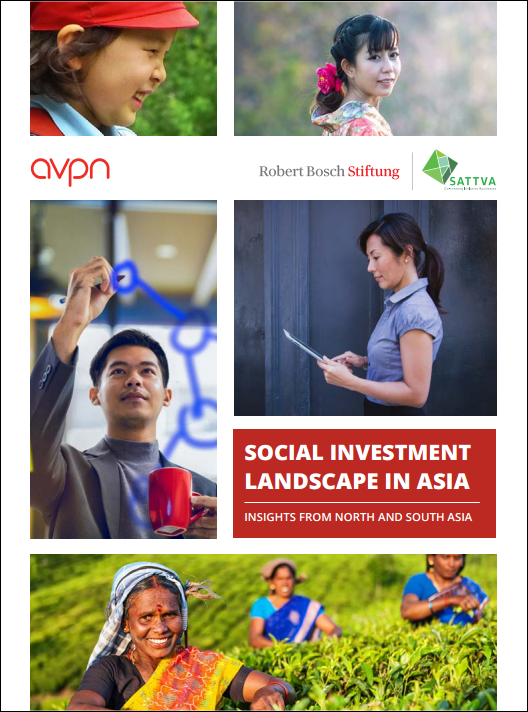 The Social Investment Landscape in Asia report, presented at the conference.

Investment not philanthropy
If you’d had a computer count the frequency with which words occurred at the conference, I’m betting ‘investment’ would have been a comfortable winner over ‘philanthropy’ and ‘grantmaking’ and would have beaten the term ‘venture philanthropy’ hands down. It was easy to feel, listening to the discussions, that social investment in social enterprises was THE way to go.

True enough, in a couple of sessions I went to, it was acknowledged that there would always be a role for grants, that some valuable initiatives would never pay their way, let alone produce a financial return for investors, but this often seemed like an afterthought, while from the demand side, it was noticeable that most of the Deal Share projects were looking for grants.

It may be that the expectations of funders and funded are not completely aligned here.

On the relative absence of discussion of venture philanthropy as such, we’ve already seen that the emphasis for participants is on the conference, not the practice. AVPN casts a wide loop and it’s undoubtedly right not to stickle about definitions, but to try and capitalize on the energy. That energy is on social investment in Asia and the buzz of this venture philanthropy event testifies to that.