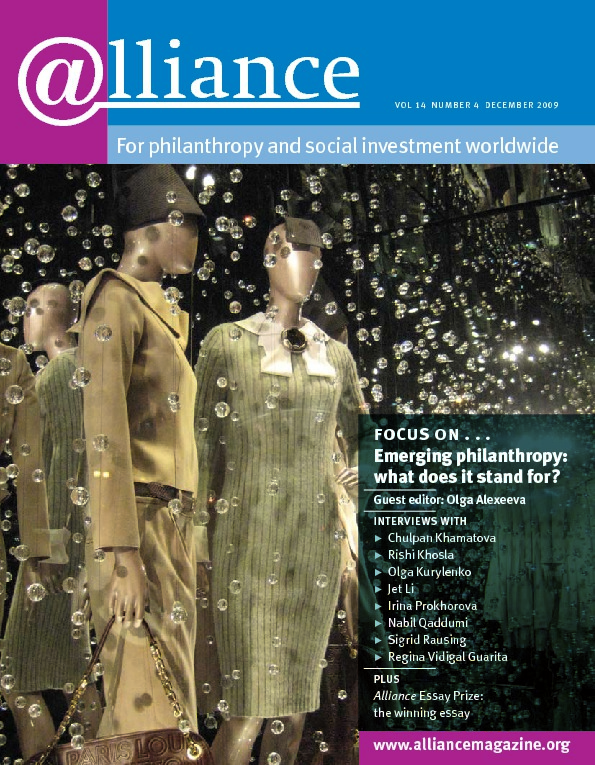 Engaging with the G8

A recently published book, The Art of Giving: Where the soul meets a business plan, by Charles Bronfman and Jeffrey Solomon, has given rise to a good deal of discussion in the US blogosphere about why people give. The focus on the end user as the primary beneficiary in the ‘social benefit supply chain’ does not capture ‘the intrinsic return to the funders’, say the authors, who see understanding why you give as a step towards more committed and successful giving.

The motives they suggest include increased self-worth, a boost in your social status, feeding your ego, a profound sense of purpose, and bringing your family together in a meaningful way – all ‘perfectly valid reasons for giving’, they insist.

The special feature in this issue of Alliance is all about the ethics of philanthropy, especially as it is emerging in the East and South; it’s about why people give and the importance of giving for the right reasons. If we want emerging philanthropy to ‘truly enhance social justice’, says guest editor Olga Alexeeva, it must be more than a matter of fashion, of adopting the accepted lifestyle of the wealthy.

How does this relate to Bronfman and Solomon’s menu of motives? Holden Karnofsky of US charity evaluator GiveWell puts his finger on it perfectly. He feels the current level of attention to the benefits of giving for the giver is ‘out of control’. Giving today is all about the giver, he accuses. ‘The sector revolves around telling donors great stories, while charities’ actual impact is unexamined and essentially irrelevant.’

The menu of motives does in fact strike me as very ‘western’. For those in the East and South, judging by the inspiring donors interviewed in this issue of Alliance, the discussion of giving centres around notions of responsibility for society – as expressed most clearly by Jet Li. Giving for reasons of personal gratification is a luxury these societies haven’t reached yet.

A greater danger does seem to be a lack of emphasis on impact, as expressed by Rishi Khosla. In some societies, any interest in the outcome negates the whole point of giving. There is also a lack of focus on social justice and an unwillingness to take on ‘difficult’ causes – though this may be partly an issue of language. ‘I think wealthy donors do like to fund social justice,’ says Martin Brookes of New Philanthropy Capital (quoted in the supplement published with this issue of Alliance), ‘but they just don’t like to call it that. It’s not the sort of language that resonates with them.’ Chulpan Khamatova is funding children’s hospitals, but she is clearly aware of the need for change to be more than cosmetic. ‘We can only prove our point when we show that we’ve achieved long-term change’, she says. Olga Kurylenko, just embarking on philanthropy, spent two days at a philanthropy conference, eager to learn about this new field. The seriousness is there. Extending the range of causes supported and focusing on effectiveness seem to be the next steps.