The topic of the special feature in this issue of Alliance is philanthropy in emerging markets. This is a topic we come back to often. Two previous special features, in March 2007 and December 2009, have been devoted to it, and numerous articles in between. So what is different about this one?

The most obvious and most sad difference is that Olga Alexeeva is not the guest editor this time, as she was for the other two. It has been a pleasure working with Filiz Bikmen and Maria Chertok on this special feature, but I know neither of them will mind my saying that there is no one with quite the vision, knowledge and understanding of this field that Olga had. We miss her.

The special supplement in the centre of this issue featuring the finalists for the first Olga Alexeeva Memorial Prize is both a tribute to Olga and a recognition of what Maria Chertok calls ‘the many different shapes and colours philanthropy development takes’. The cover photo echoes these shapes and colours. 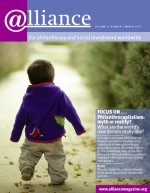 But what else is different? Both the previous special features aimed to find out more about ‘new philanthropists’ the world over. ‘What are the world’s new donors really like?’ was the question addressed by the March 2007 feature. ‘Like a newborn child it is disoriented, its movements are uncoordinated, it is easily frightened and gets distrustful after even the slightest negative experience,’ wrote Olga in an article called ‘New philanthropy: a micro-world of busy youngsters’. The magazine cover shows a ‘toddler’, unsteady on his feet but moving forward.

In December 2009, the focus turned to ethics. ‘Emerging philanthropy: what does it stand for?’ 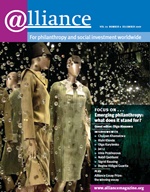 asked the special feature title. For many years, said Olga in an article called ‘The Gucci bag of new philanthropy’, I was just happy that we pushed wealthy Russians to open their pockets.’ Now it was time to look at why people give and how effective their giving is. ‘If we want emerging philanthropy to “truly enhance social justice”,’ said Olga, ‘it must be more than a matter of fashion, of adopting the accepted lifestyle of the wealthy.’

What about the current special feature, ‘Markets are emerging: what about philanthropy?’ Here the focus is largely on the BRICS and MINT[1] countries, all with booming economies and many becoming aid donors themselves. Is philanthropy keeping up? Rob John outlines a wealth of innovation in Asia; Halima Mahomed describes the distinctive paths that philanthropy is taking in Africa; Bin Pei observes increasing interest in philanthropy in China. South African billionaire Patrice Motsepe and Russia’s Vladimir Potanin have just announced that they will sign the Giving Pledge. We are looking at the ‘New horizons’ for maturing philanthropy sectors, the opportunities and challenges that lie ahead; the toddler stage is well behind us. What is needed now, says Filiz Bikmen, is ‘a more robust and collaborative philanthropic infrastructure which can more effectively tap into the new wealth that is emerging’.

The power of networks