A time for self-determination

Breaking with the past

The last 12 months have witnessed three major events that have the potential to transform the political landscape: the election of Barack Obama as president of the United States, the present devastating economic and financial crisis, and a crisis of confidence in the neoliberal ideologies that have dominated the thinking of western governments for the last 30 years. Taken together, they present an opportunity for Africans to begin to look to themselves rather than others for the solutions to their problems, to take their future into their own hands. Can philanthropy play a role in supporting this transformation? In times of recession, its impact could be merely divisive and negative, but this need not be the case. 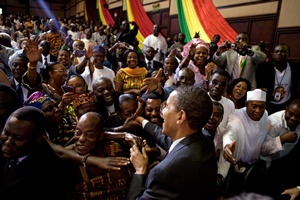 The first of the events that has transformed our world was the election of Barack Obama, the first person of African descent to become president of the United States – an event that released a flood of hope and aspiration that went well beyond the borders of that country and swept across every corner of the African continent. One has only to witness the carnival spirit in Accra marking Obama’s second visit to the African continent in the space of a month to understand the effect he has had. While his campaign slogan of ‘change’ may have been electoral rhetoric, it captures the hopes of ordinary people that change can and will happen. The sad fact is that the election of an individual and the formation of an administration does not automatically produce the sort of change that many are looking for. Domestically his healthcare programme is under threat, and internationally there is still pressure towards the kind of belligerence that has recently characterized US relationships with the developing world – though the general tone of the new administration’s foreign policy, as Obama’s Cairo speech showed, has been more conciliatory.

But history can be cruel: for the election of Obama has coincided with the worst economic and financial crisis since the Great Depression, this being the second major event that has brought about significant changes in our world. Obama’s capacity to deliver on the hopes he has released is limited. He has been forced to participate in the pouring of public money into collapsing banks and financial institutions instead of into socially useful and productive ventures. As the UN Millennium Campaign pointed out, ‘since the inception of aid (overseas development assistance) almost 50 years ago, donor countries have given some $2 trillion in aid. And yet over the past year, $18 trillion has been found globally to bail out banks and other financial institutions.’[1] Such figures put the recent G8 announcement of $20 billion for aid into perspective.

If the economic crisis is creating constraints in the North, in the global South its impact is likely to be devastating. In Africa, countries that have already been brought to their knees by years of externally driven structural adjustment programmes and PRSPs (Poverty Reduction Strategy Papers), face a major implosion. Even before the crisis broke, rising prices had added 75 million people to the ranks of the hungry and driven a further 125 million people in developing countries into extreme poverty – in spite of the fact that, according to the FAO, with record grain harvests in 2007, there was more than enough food to feed everyone. ‘There is food on the shelves but people are priced out of the market,’ says FAO executive director Josette Sheeran.

The third event, linked to the first two, and one that is rarely acknowledged, is that we are facing not just a financial or economic crisis but also a major crisis of confidence in the neoliberal ideologies of successive European and US governments. For years, African governments were told that they must end subsidies to their farmers (though farmers in the West have continued to benefit from such subsidies), cut social expenditures, open up their territories to the free exploitation of international capital, and leave it to the ‘market’ and to business to meet the needs of the many because eventually their wealth would ‘trickle down’ and raise the poor out of their misery. And these policies have led to the present grave crisis. In the 30 years of neoliberal policies, the rich have got richer, and the poor have got poorer. Suddenly, old dogmas against nationalization of banks and industries in the West have been thrown out of the window as financial institutions and corporations look to the public purse to bail them out of the mess they themselves have made.

But the crisis of confidence in the mantras of neoliberalism gives African governments the opportunity to turn round and say: ok, what you forced us to implement has not worked. China, India, Brazil, US, England, France, Germany – all of you succeeded in building your economies through protectionist policies, by ensuring that wealth did not escape through the back door, but was reinvested back into the economy, by subsidizing farmers, and exercising stringent exchange controls. Now it is time to for us in Africa to look to ourselves, rather than others, to solve our problems and to reflect on the wisdom of Nyerere and Nkrumah, who were committed in their own ways to building pan-Africanism, but above all to demand that self-determination should be precisely that.

Of course, many in our governments have done very well out of deals with corporations and western government aid contracts, and so are unlikely to see the alternative path towards self-sufficiency as in their own interests. But people are increasingly sceptical about the ‘trickle down’ theory that informs so much of the policies promoted by AGRA (Alliance for a Green Revolution in Africa), Paul Collier and others. There has never been such urgent debate in Africa and internationally about finding alternatives to the disastrous ideologies and policies of the past, or such open and widespread discontent about the policies of our governments. The potential is there for building a future based on justice, hope and the common good.

What role could philanthropy play in building this different future? Whether we like it or not, philanthropy in times of shortage has, potentially, the unintended effect of breaking down social cohesion precisely in a period when such cohesion and ‘class action’ by the dispossessed is most needed if their interests are to be defended or advanced. Many philanthropic agencies face declining budgets and in some cases closure owing to the recessions. With smaller amounts to disburse, the competition for grants will increase. The danger is that as the competition gets greater, so the needy will increasingly fight with each other for access to the crumbs. The potential power of philanthropic institutions will inevitably increase – not necessarily because they want it to, but because civil society will be divided and compete ever more uncivilly to please the proclivities of their potential funders.

This negative impact is not, however, inevitable. Much depends on the willingness of philanthropic agencies to focus attention on supporting transformative social change that builds on collective rather than individualistic actions or on acts of charity. There are growing social movements arising across the continent among landless people, women farmers, shackdwellers, and the young, each seeking ways to engage their governments on policy that addresses their needs. Their ability to share experiences and to formulate common policies that they can present at local and national level, and at continental levels at the African Union, is currently limited. It is not that they do not wish to engage with policymakers, nor that policymakers are deaf to their concerns. But the resources for such engagement are often limited.

Perhaps the most important lesson to be drawn from recent experiences in the USA – where the concerted efforts of philanthropic institutions to ensure that voter registration and education was widespread, especially among marginalized communities, arguably had a significant influence on the outcome of the US presidential elections – is the importance of voter education, voter registration, and ensuring that all sections of society can engage actively and knowledgeably in the political process. Perhaps more important in the third world than anywhere else, this can help to breathe life into those fetid corners where corruption, despotism and chicanery fester unseen. In the current widespread crisis of credibility, philanthropic support for such actions would help citizens to gain an authority over their own experience that would allow them to engage in determining their own future.