Approaches to evaluating NGOs – some examples from around the world 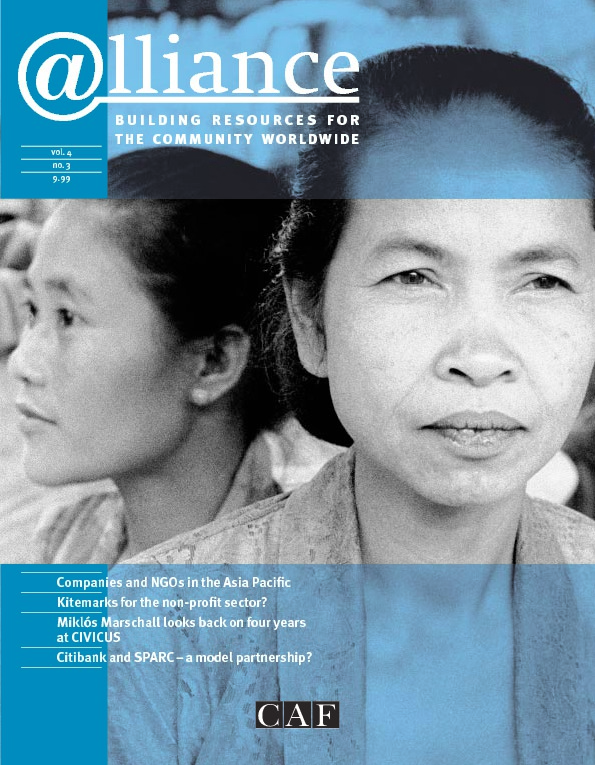 A new form of people power in the Philippines

Last year saw the establishment of a unique body, the Philippine Council for NGO Certification (PCNC), to certify NGOs and people’s organizations (POs) as donee institutions – and so eligible to receive tax-deductible donations (see Alliance, vol. 3, no. 3). This is the first time a government has given up the power to determine who gets tax incentives.

The Bureau of Internal Revenue has now released the implementing rules and regulations under which the PCNC will operate.

Established by six of the largest national NGO networks in the country, with more than 5,000 members between them, one of PCNC’s first tasks was to undertake widespread consultations with leading NGOs to establish the criteria for certification. Among these are:
• clearly articulated vision, mission and goals;
• working governance structure;
• documented administrative policies and procedures;
• clearly laid out programmes with indicators of success and monitoring systems;
• adequate financial systems and procedures ensuring accountability and transparency;
• networking capabilities.

Once criteria were established, volunteer evaluators were recruited from the top officers of PCNC’s member organizations and trained in their use. To date, over 300 evaluators from all over the country have been trained. It is they who will examine the operations of applicant organizations to determine whether they meet the minimum criteria for certification.

PCNC has also been waging an intensive information campaign among the development community to explain the need for the certification process and to assure them of the PCNC’s commitment to the highest standards of professionalism.

In less than six months, over 200 enquiries have been received by PCNC; of these, ten have already submitted a formal letter seeking certification plus complete documentation. As of June 1999, seven have been evaluated, of which four have been certified (the other three are not finished yet).

PCNC is painfully aware of the challenge it faces and the heavy responsibility it bears to prove itself worthy of the trust placed in it. But it is buoyed by the support and enthusiasm shown by the NGO community, which has long felt the need for self-regulation in order to better professionalize the sector.

Victoria Garchitorena is chairman of PCNC and president of Ayala Foundation Inc.

For more information about PCNC, contact Victoria Garchitorena at garchitorena.vp@ayala.com.ph

The Indian government is planning to commission CAF India and Voluntary Action Network India (VANI) to validate 12,000 Indian NGOs over three years and to publish the details on the Internet. This will include financial information and will thus provide what amounts to a ‘credit rating’ for the NGOs.

It all begin with a collaborative exercise by CAF and VANI to survey the voluntary sector in India, estimated to consist of 1 million organizations. A questionnaire in Hindi and English was sent to 2,500 NGOs across the country and attracted the attention of the Ministry of Rural Development and the Planning Commission  of  the  Government of India.

Aspects of NGOs to be covered by the validation process include:
• governing documents;
• financial data and programme-to-operating-costs ratios;
• profiles of trustees and staff;
• programme themes;
• impact of the NGO in the area;
• awards, evaluations, etc received and list of funding partners.

The voluntary sector itself is critical of the scheme. CAF/VANI are accused of playing judge and doubts about their ability to adopt a neutral role have been voiced. The use of financial ratios as a criterion is also questioned: NGOs sometimes work in very difficult circumstances and uniform ratios may not be a realistic expectation. Other critics complain of CAF/VANI being coopted by the government. This may make it difficult for them to adopt a pro-poor stance, or to confront the state over issues such as employment rights and protection for citizens. Their NGO watchdog role may thus be diluted.

For further information contact Mathew Cherian at mathewc@nde.vsnl.net.in
CAF already has 900 NGOs listed on its website at http://www.charitynet.org/cafindia – a further 2000 NGOs will be added by the end of the year.
The CAF/VANI survey data will be published by Sage India later this year as Dimensions of the Voluntary Sector.


Mexican NGOs recognized as equivalent to US public charities

Since 1994 the Income Tax Treaty between the Mexican and US governments has allowed corporations and individuals from one country to make tax-deductible charitable contributions to the other country’s non-profit organizations (NPOs).

However, an important limitation of the Treaty is that the tax deductions apply only to income earned in the other country. Another is the limited number of Mexican NGOs that can be recognized under the treaty — basically only welfare organizations directly offering charitable programmes, for example medical, cultural and educational institutions. Grant-making foundations are not recognized, nor are NPOs involved in issues such as human rights.

In order to comply with the provisions in the US Mexican Tax Treaty, the Mexican Ministry of Finance and Public Credit has set forth criteria for organizations that wish to be recognized, such as showing that a significant portion of their revenues comes from contributions from the general public.

According to Mexican government fiscal sources more than 130 organizations have been authorized to issue tax-deductible receipts under the treaty.

The treaty also greatly facilitates the grant-making process for US foundations making grants to recognized Mexican organizations: because the Mexican prospective grantee is equivalent to a US tax-exempt organization, the American foundation no longer has to comply with rigorous Internal Revenue Service requirements for donations to
foreign organizations.

In Brazil the tradition is to give to a charity run by a family member. But how do you move from trusting your family to trusting an outside organization? A government attempt to set up some sort of accreditation scheme was seen by the non-profit sector as both too loose and too political. So Stephen Kanitz of Kanitz & Associates stepped into the breach.

Kanitz & Associates, a private consulting firm, had had 20 years’ experience in identifying the country’s top 500 private corporations for a publication similar to Fortune in the US. Drawing on the experience of organizations like the Council of Better Business Bureaus and NCIB in establishing criteria, and with the help of an advisory committee composed of third sector national leaders, Kanitz & Associates established the ‘Very Efficient Award’.

The first step for an NGO aspiring to receive the award is to be nominated by members of the community where it works. Information is then collected from the organization through a questionnaire covering the 44 variables; annual balances, IRS income declarations, bylaws, etc must also be supplied. The information is then analysed and reviewed to ensure that the criteria were applied equally to all NGOs.

With the scheme now in the third year of existence, more than 1,200 organizations have been nominated and 150 selected to receive the award. The results are startling: on average, award-winners have doubled their fundraised income and trebled their coverage in the media. Other nominated organizations are given support to help them improve their standards and qualify another year.

One criticism that can be made of the system is that the criteria clearly favour a large,  well-established NGO. Extra points are awarded for such variables as being audited by a large organization, having an income over a certain level, having more than 100 donors, operating nationally, having existed for 50 years. For the newer, smaller NGO it will take some time to get a foot in the door.

Marcos Kisil is President of GIFE, the Brazilian association of grantmakers.

Applying the smell test — the art of evaluation

Evaluating potential grant recipients for donors may seem like a simple matter of applying an agreed set of criteria and then making a judgement. But there are elements of the process that are more art than science.

CAF regularly evaluates potential grant recipients for donor advised funds managed by CAF or CAFAmerica. A key part of the evaluation process involves making a judgement about the ‘charitable status’ of a proposed recipient. Rather than relying exclusively on local, in-country legal determinations, we hold recipients to UK and US standards of what those terms mean.

In order to make a thorough evaluation, we require applicants to provide:
• grant application forms which outline basic information about the organization;
• self-certification on various points, such as whether funds are used for lobbying purposes;
• copies of key documents including annual report and accounts, government certification of charitable status under local law, and organizational by-laws or constitution.

As you might imagine, applying US or UK legal standards to completed dossiers, many of them in foreign languages or in an international form of English, is to some extent an art form. While we must go through a basic ‘checklist’ of requirements (eg what proportion of the organization’s funds is spent on campaigning or lobbying?), we must also read ‘between the lines.’

Three interesting problems that recur when applying a ‘smell test’ are:

Anything strange or unusual  In the course of reviewing proposed UK charitable recipients on behalf of US donor advised funds, we have found several with very odd clauses in their organizing documents or strange arrangements that suggested a close connection between the charity’s purposes and the trustees’ commercial interests. While a grant from a UK donor to these organizations would be straightforward as all were registered UK charities, we were not able to follow through on the US donor’s suggestion.

‘Glossy materials’ bias  A large well-organized charity, with beautiful brochures and lists of impressive trustees and supporters, might seem more trustworthy than a small, grassroots organization whose documents are handwritten or typed on an English civil service typewriter circa 1930. However, careful reading of all materials often reveals that the more informal organization is the more genuinely charitable.

Affiliations with government  Heavy involvement of government officials in the applicant’s activities can be a warning sign; it may demonstrate undue government interference and bring the applicant’s independence into question. In some countries, however, almost all social and community services are provided through quasi-governmental structures. Over time, with help from CAF affiliates around the world, we’ve developed a good understanding of the regulatory and operating environment for NGOs in various countries.

Combining the ‘smell test’ with a more formal system of accreditation might be a new art in itself.

NCIB evaluates charities that solicit the general public nationally and generally have annual budgets of over $500,000. The number of enquiries received is an important factor in deciding which organizations to cover.

About half of NCIB’s financial support comes from individual contributors, most of whom are members of NCIB. The rest comes from corporations and foundations. NCIB does not accept donations from the organizations it evaluates.

NCIB’s Standards in Philanthropy require such fundamentals as an active and responsible governing body, a clear statement of purpose, a programme consistent with that purpose, reasonable expenses, ethical publicity, fundraising and promotion, and public accountability.

The majority of reports are based on information provided to NCIB by the organization being evaluated. Once the report is drafted and reviewed, a ‘prepublication copy’ of the report is sent to the charity for comments and suggestions.

For more information on NCIB, visit its website http://www.give.org.

Towards a perfect civil society