Can philanthropy be networked and strategic?

It is a feeling many of us know well. The idea of working through networks has appeal, but real life gets in the way. For non-profit leaders, the day-to-day challenges of running organizations,

competing for funding and delivering on targeted goals make it difficult to look beyond one’s organizational walls. What’s more, in an age where the watchword is strategic philanthropy, combining networking with a strategic approach often looks counter-intuitive. The experience of the Barr Foundation in Boston suggests that neither of these things need be true.

In 2004, the Barr Foundation launched its fellowship with two goals in mind: to give non-profit leaders time and space to rest, reflect and rejuvenate themselves so that their organizations and ultimately the city would benefit, and to foster relationship building among fellows, thereby catalysing a network of local non-profit leaders.

Eight years later, the 48 local leaders who form the network of fellows are demonstrating the promise of networks, illustrating Barr Foundation leaders’ theory that investing in the network, and in particular in relationships, delivers rich returns – what the Boston Globe described as ‘a web of collaboration rippling through the nonprofit community with increasing effect’. By creating space for individuals to cultivate connections and build relationships, the programme has enabled collaborative action that has led to greater impact.

The programme involves working with what we call a network, as opposed to a traditional, mindset (see figure). While Barr’s funding has a clear intent, it is long-term and loosely controlled. The outcomes are emergent – determined by the network and fostered by the foundation. Power is distributed: the Barr Foundation is, in effect, building the capacity of the whole system as opposed to strengthening individual efforts.

Working with a network mindset can feel at odds with ‘strategic’ philanthropy – characterized by a sharp focus, predetermined measurable outcomes, and a clear path to progress. It’s not that networked philanthropy is not strategic or that strategic philanthropy ignores the value of networks, but inadvertently some of the steps foundations may take to be more strategic are at cross-purposes with the approach needed for networked approaches to succeed. What is needed is an approach that combines the best of both worlds. 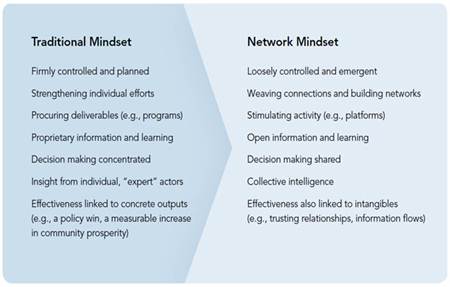 Of course, effectively integrating strategic and network approaches is easier said than done. Some of the measures grantmakers take with a strategic approach, such as narrowly defining programme areas, focusing on funder-driven strategies, and expecting measurable impact within short time horizons, can inhibit working more collaboratively. In addition, there are risks to working with networks. It takes more time because investment in relationship building is often required; the free flow of information through effective networks can lead to misuse of information or breaches in confidentiality; there is always a chance that the ‘crowd’ may not get it right. But the potential rewards outweigh the risks.

What should funders do?
In the year since we released Catalyzing Networks for Social Change: A funder’s guide,[1] we have seen the interest in network approaches to social change grow considerably, and we have continued to learn from the work of colleagues in our field. It seems in the past year that the conversation has shifted from ‘Why are networks important in philanthropy?’ to ‘How do we work this way?’ More specifically, how do we embrace working with a network mindset while remaining focused and strategic? In response we offer three recommendations: look ahead, let others in, and loosen the reins.

Look ahead
Supporting networks requires funders to think long-range and put the solution to the problem they are trying to address before organizational rules or priorities. Looking ahead also means becoming more comfortable with the slow pace of progress – a challenge for funders wanting evidence of near-term impact.

The RE-AMP Network, a group of more than 144 funders and activists, has a goal that defies short-term grant cycles: reduce global warming emissions in the upper midwest of the US by 80 per cent by 2050. Nine years on, they’ve made impressive achievements, including helping legislators pass energy efficiency policies in six states, promoting one of the most rigorous cap-and-trade programmes in the US, and halting the development of 28 new coal-fuelled power plants (see ‘Using networks to tackle complex problems‘ for further detail on the RE-AMP Network).

Let others in
Embracing a network mindset means listening to a range of views, tapping into new sources of ideas, and even co-creating strategy. The Wikimedia Foundation – a non-profit dedicated to encouraging the development and distribution of content from its projects free of charge – engaged its worldwide community in a year-long process to develop a strategic direction for the Wikimedia movement. In the end, more than 1,000 people contributed to the Wikimedia Strategy Project. Alignment around a set of five strategic goals by Wikimedians around the world has given the foundation a community-backed mandate for action, paving the way, for example, for a decision to increase investment in the developing world.

Loosen the reins
The heightened interest in strategic philanthropy means that many foundations select grantees and measure outcomes in support of their own theories of change. Working with a network mindset means loosening the reins and leaving space to invest in possibilities as they emerge.

For nearly a decade the David and Lucile Packard Foundation supported a network of reproductive health leaders that fostered collective action to improve reproductive health options (the Leadership Development for Mobilizing Reproductive Health Program, or LDM). But working out just how to foster collective action was a challenge. In the early stages of the work, groups of fellows were encouraged to draft action plans. But when participants became preoccupied with concerns about delivering on their plans, LDM programme leaders shifted to encouraging network members to use the network to amplify their existing work. The results were positive. Reproductive health leaders across five countries began enhancing advocacy and direct services with input from each other via the Wiki, Facebook, YouTube and text messaging. Previously, the network often required the cumbersome participation of a majority of members; after network members began using the network to meet their needs, results were achieved more quickly by engaging individuals, sub-networks, or the full network, as  appropriate. With less central control, the network was able to achieve more.

What will the future hold?
In recent years, we’ve experienced the advent and adoption of digital tools that are exponentially extending our ability to share information, connect with new and old colleagues and coordinate action. At the same time, there have been significant advances in our ability to understand complex webs of relationships. There is growing recognition that networks are an inherent part of all communities and societies, and by harnessing their power we can achieve great impact. Looking forward, we expect that purely top-down approaches to philanthropy will be regarded as the old way of doing business and participating in and supporting networks will be considered standard practice for foundations. Philanthropy will be strategic and networked.

1 Lori Bartczak and Diana Scearce (2011) Catalyzing Networks for Social Change: A funder’s guide, co-published by GEO and the Monitor Institute.

Lori Bartczak is director of programs and communications at Grantmakers for Effective Organizations. Email Bartczak@geofunders.org

Diana Scearce is evaluation and learning director at the David and Lucile Packard Foundation. Email dscearce@packard.org