Doing a lot with very little

Global temperature and sea levels are rising. Glaciers and ice sheets are shrinking. Devastating droughts, floods and heat waves occur ever more frequently, often hitting the poorest and most vulnerable populations most severely.

The basic physics of global warming have long been understood. In 1965 US president Lyndon B Johnson’s scientific advisory committee warned that releasing carbon dioxide into the atmosphere would lead to higher global temperatures causing ice caps to melt and sea levels to rise. ‘Man is unwittingly conducting a vast geophysical experiment,’ warned the scientists. ‘Within a few generations he is burning the fossil fuels that slowly accumulated in the earth over the past 500 million years … the climatic changes that may be produced by the increased carbon dioxide (CO2) content could be deleterious from the point of view of human beings.’

From Rio and Kyoto …
After decades of further discussion, practically all nations finally acknowledged the seriousness of the threat at the Earth Summit in Rio in 1992 and vowed to prevent what was described as a ‘dangerous anthropogenic interference with the climate system’. In 1997 the Kyoto protocol was adopted in which industrial nations committed to reducing their emissions by 5 per cent by the year 2012. This was overachieved (by 2012 the collective emissions of these countries were 22 per cent lower than in 1990), but rapidly growing emerging economies like China meant that global CO2 emissions continued to increase unabated, and atmospheric CO2 concentrations crossed the line of 400 ppm for the first time in millions of years.

‘The emissions commitments made by individual countries add up to only about half the reductions needed to stop global warming below 2 °C.’

… to Paris
In December 2015, 195 nations unanimously passed the Paris Climate Agreement, which involves nearly all nations in a joint effort to halt global warming well below 2 °C. While that is likely a historic breakthrough, the problems are far from solved. The emissions commitments made by individual countries add up to only about half the reductions needed to stop global warming below 2 °C. And implementing even those modest commitments is a huge challenge, facing powerful resistance from interested parties that fear to be losers in the energy transition. 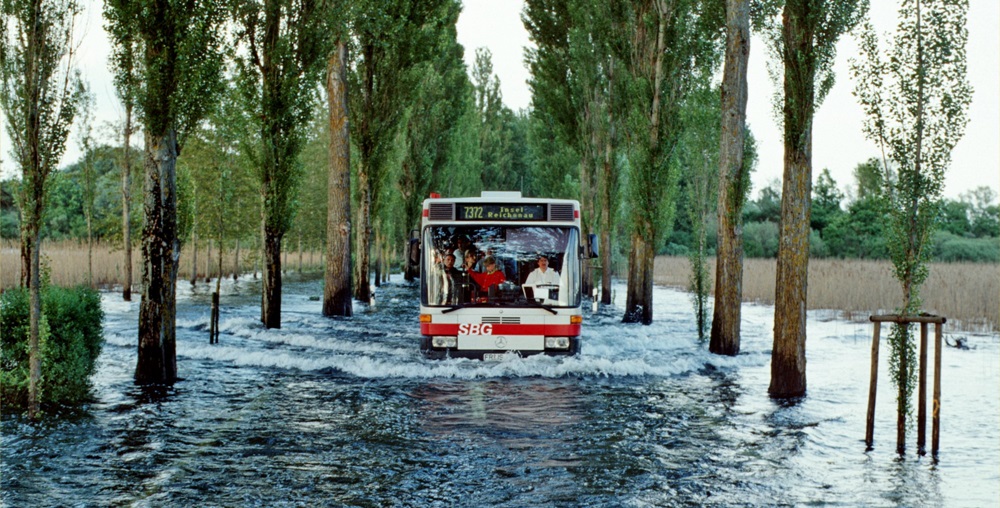 Flooded road on the island of Reichenau in Lake Constance, Germany, during the flooding of June 1999.

Climate change denial in the face of human-made global warming
For decades, interest groups have been conducting a relentless public relations campaign to sow doubt about climate science. This confusion campaign has been largely successful, in that the general public is generally unaware of the fact that a near-unanimous consensus (around 97 per cent) exists among working climate scientists about the predominantly human causes of global warming.

‘There is no scientific doubt that this increase in atmospheric CO2 is entirely human-caused.’

Scientists have known since the 19th century that carbon dioxide is a greenhouse gas which naturally helps to keep our planet warm enough for life to thrive on earth. Increasing its abundance in the atmosphere will lead to warming surface temperatures. The amount of CO2 in the atmosphere is increasing steadily as demonstrated by many measurements, eg on Mauna Loa in Hawaii, the famous Keeling curve (Figure 1). There is no scientific doubt that this increase in atmospheric CO2 is entirely human-caused. Its isotope composition gives away the fossil origin of the extra CO2, and a simple budget calculation shows that the amount of fossil carbon we have dug up from the earth’s crust and added to the atmosphere is in fact more than enough to account for the full increase. Some of the added carbon is taken up by forests and more is absorbed by oceans. In ocean waters, CO2 forms carbonic acid and causes the ocean waters to become more acidic, a serious issue in itself which threatens marine life. 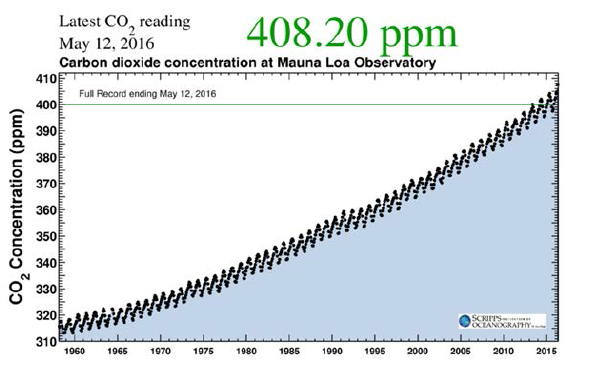 Figure 1 The carbon dioxide concentration in the atmosphere displays a seasonal cycle due to the ‘breathing’ of the biosphere as well as an upward trend due to human-caused emissions.

The climatic effect of the rising CO2 concentration as well as some other greenhouse gases can be calculated in two steps: first, the ‘radiative forcing’ is computed. Then this is translated to a warming of global surface temperatures accounting for various feedbacks such as water vapour and cloud. How sensitively the surface temperatures respond can be determined using climate models or derived from past natural climate variations in earth’s history. Both approaches give consistent results. They demonstrate that a doubling of CO2 concentrations will lead to global warming of around 3 °C.

Fully consistent with the radiative forcing that we have caused thus far, global temperature has risen by about 1 °C until now (Figure 2). As the Intergovernmental Panel on Climate Change (IPCC) has documented in detail, the natural contribution to global temperature change can be constrained to being in the range of -0.1 to + 0.1 °C since 1950. Humans are without doubt the dominant cause of modern global warming. 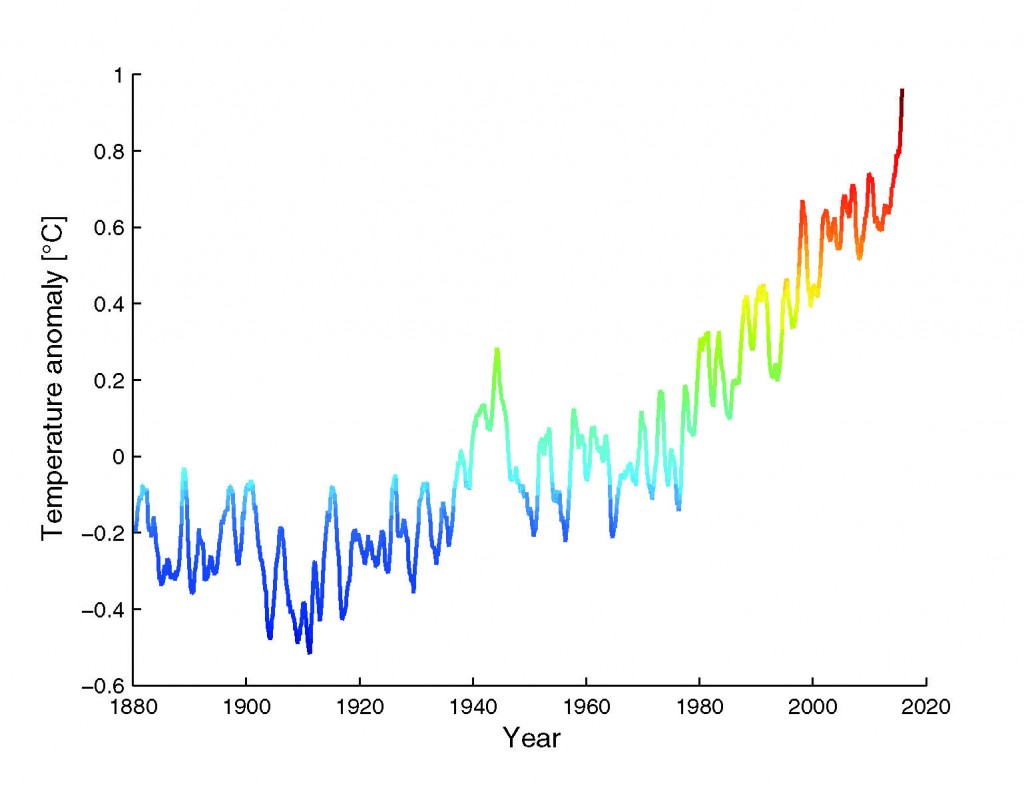 Figure 2 Global average temperature from 1880 up to March 2016. Data from NASA shown as 12-month running means. The anomalies are relative to the baseline period 1951-80.

Effects of global warming
Melting glaciers and ice sheets
One clearly visible consequence of this warming is the loss of ice: mountain glaciers are shrinking, the huge ice sheets on Greenland and Antarctica are haemorrhaging mass at an accelerating rate, and the summer sea ice cover of the Arctic Ocean has shrunk by almost half in recent decades.

Rising seas
As warming waters expand and continental ice is lost, an inevitable result is a rise in sea levels. Sea levels have increased by nearly 20 cm in the last 100 years, the largest rise of any century in recent history. Currently, the sea level is rising at over 3 cm per decade and is expected to rise by up to a meter by the end of the century. Even if global warming is stopped at 2 °C, sea levels will probably keep rising by several meters in subsequent centuries in a delayed response. There is enough ice on earth to raise sea levels by over 60 meters. Many coastal cities and low-lying islands will probably be lost. 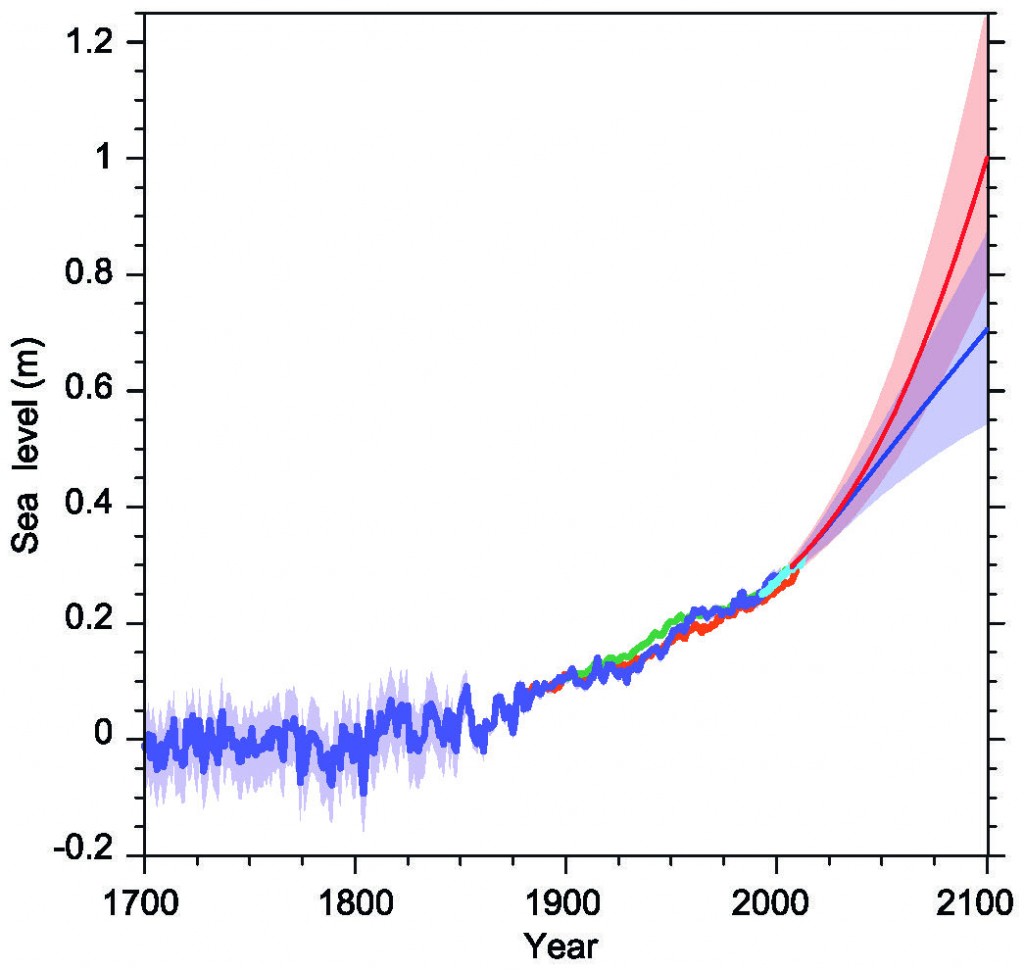 Loss of plant and animal species
With unmitigated warming, global temperatures would reach a high not seen for millions of years. This rise would be much too fast for many plant and animal species to adapt. Many species are already affected by global warming and a large fraction – up to one third – could be doomed to extinction by the year 2050.

‘Unless global warming is stopped well below 2 °C, adverse climate impacts will transform our home planet causing human suffering and tragedy for many millions. Halting global warming at a manageable level is now a race against the clock.’

Fires, floods and heat waves
Extreme weather events are already on the rise due to global warming. New monthly heat records are now set five times as often as they would be just by chance in a stable climate. This means that the majority of lasting heat waves are already caused by humans. In a warmer climate, the risk of extreme flooding events increases as warmer air can hold more water. Droughts and forest fires are likely to increase. This is currently occurring in the Mediterranean region, Southern Africa, California and Canada. Hurricanes are expected to become more destructive. Harvest failures threaten food security and political stability in vulnerable countries.

Unless global warming is stopped well below 2 °C, adverse climate impacts will transform our home planet causing human suffering and tragedy for many millions. Halting global warming at a manageable level is now a race against the clock.

Stefan Rahmstorf is head of Earth System Analysis, Potsdam Institute for Climate Impact Research. Email stefan@pik-potsdam.de
Lead image: Sea ice cover on the Arctic Ocean has been shrinking dramatically over the past decades.

Hello Stefan, May I just repost my comment at Alliance Magazine Facebook page: "Love your post Stefan, my country Philippines "intends to undertake GHG emissions reduction of 70% of its Business As Usual senario." This is really ambitious and it is good. Living in Eastern Visayas region, we experienced firsthand the effects of extreme weather in typhoon haiyan (Yolanda) as well as the constant battle of pest infestations. Hoping your research will shed light to governments decision makers to truly impliment policies. For my province of Southern Leyte this is our attempt to be of help, http://www.slideshare.net/.../turning-garbage-into-trees.... Thank you. Happy weekend to us all." Thank you once again Stefan for sharing these findings. Sincerely yours, Nelson