This special feature has focused on attempts to meet the massive energy deficit in Bihar. The aim has been to throw light on the limited number of entrepreneurs and funders that are working on the issue and to encourage others to join in. A natural question from those working on other areas, for example healthcare and education, might be: how does this relate to what we’re trying to achieve? Is energy provision really the priority when so much else is lacking?

There are undoubtedly questions to be asked. Can access to energy raise villagers above subsistence levels, asks Rajesh Tandon of PRIA (Society for Participatory Research in Asia), which aims to ‘empower the poor and the excluded, through knowledge and active participation, such that they can claim their rights and improve their lives’. This has clear echoes of the questions often raised about microfinance and whether it can ever lift people out of poverty. If you define subsistence as meeting basic needs, it’s a moving target, Tandon points out, with items such as mobile phones now found in almost every household.  Another definition that he offers is ‘having no choices’. Certainly choices are not something that village people in Bihar have a lot of.

Ajay Mehta of the National Foundation for India, which ‘promotes civil society action and public deliberation for social change’, worries that philanthropists and NGOs will be seduced by the idea of a one-stop shop to development – whether it be income generation or access to energy or whatever. Development can be complex and messy and slow, he stresses. He also stresses the need not to overstate the development benefits brought by access to energy. The direct health and safety benefits of replacing kerosene lamps are indisputable, but other benefits cannot be relied on. Enabling children to study longer in the evening, for example, will help educational attainment only if the schools are running well and the teachers are good and the kids are going. Building a health centre with new facilities may not improve people’s health unless it opens regularly and has good-quality staff.

That said, access to energy is clearly a prerequisite to modern education and healthcare provision, and ought not to be viewed independently of the wider development context. The risk that development organizations face is that in trying to provide a complex holistic solution to multiple related problems, they end up not making a meaningful impact on any of them.

There does seem to be great potential for cooperation between entrepreneur-led businesses working on access to energy and development organizations working in other areas.

I visited the Aga Khan Foundation (AKF) office in Patna. AKF is piloting in Bihar what they describe as a ‘holistic approach to development’. This means they are tackling health, education, income generation, etc together rather than pursuing each separately, working through local community volunteers and women’s groups. They see the lack of access to energy as a barrier to what they want to achieve and have been exploring possible approaches to decentralized energy provision. This has involved both conducting their own mini-pilot with a community mobile charging station and exploring how to replicate the models of Husk Power and Greenlight, d.light and the other solar companies.

We also visited the Gates Foundation in New Delhi, and they too are piloting an integrated approach to development in Bihar. One clear bottleneck is access to electricity. All the Gates programmes will require some kind of good-quality, reliable power supply. Working with World Health Partners, for example, they’re trying to create a network of around 12,000 private health practitioners across 25 districts of Bihar. The larger of these would be telemedicine centres, offering a consultation facility whereby people can be connected via video links to care centres in bigger cities where diagnosis can be made and treatment started.

They are considering installing diesel generators to meet the power requirement, but these are polluting and expensive to run. Working with Husk Power to bring mini-grid electricity to the areas where they are working could be a good solution. It is certainly a potential of which Gyanesh Pandey, Husk Power CEO, is well aware. He does not see Husk Power expanding from 65 to over 2,000 organizations in three years on their own; he envisages partner organizations operating groups of plants on something like a franchise model (see interview), with Husk Power setting up and maintaining the plants. He sees development organizations working in areas with little or no access to electricity, and frustrated by the limitations on what they can achieve in villages with no energy supply, as ideal partners.

Another area of Gates’ work in Bihar will involve communicating public health messages, with the aim of improving family health, working with the BBC World Service Trust. Here they are considering using mobile phones as one way of communicating behaviour change messages. In this case, the electricity required for charging phones could be provided by Husk Power or by a solar light incorporating a charger.

Another potential area for cooperation relates to the networks of sellers and plant operators that Greenlight, Dharma and Husk Power are increasingly building up – networks that already number in the thousands. Could Gates leverage these networks? Could they in some instances be the channel through which their partners deliver services or development messages, given that they are trusted by their customers and have access to low-income communities in a commercial, sustainable way?

Conversely, where an organization like AKF already has established networks of volunteer community workers, it might be that some of these would want to become Greenlight sellers. ‘They would be good saathis,’ says Anish Thakkar of Greenlight, ‘well connected and used to conveying messages to people. And having an income source would strengthen and stabilize the network.’ Greenlight sellers could also work with AKF volunteers. Their volunteers work with many women’s savings groups and these groups would be a good platform for explaining the benefits of replacing kerosene lamps with solar lights.

What are the barriers to development organizations and energy companies working together? One barrier is a lack of understanding of the new breed of energy entrepreneurs. There is a tendency on the part of some development agencies to see them as traditional businesspeople, motivated solely by profitability, with little interest in reaching into remote rural areas that are hard to reach where margins will be low. Once development organizations realize that these energy entrepreneurs are as driven by the desire to improve the lives of rural communities as they are, but see commercial viability as the only route to achieving scale and sustainability, some barriers could come down and fruitful partnerships start to develop.

Lack of awareness could also be a barrier to new funders coming into the energy space. Mandeep Singh of d.light feels that ‘philanthropic funders tend to focus on education and empowerment and don’t see the links these have with energy’. Arpana Udupa of Greenpeace India feels that helping funders interested in working in Bihar understand how energy is integral to their work will be a useful task for the Bihar Renewable Energy Development Support Network. This could happen through the NGOs approaching their own funders – for example health NGOs that can’t operate primary healthcare centres because of lack of electricity.

Doing it on their own

Health and education benefits can also come from energy companies acting themselves, apart from any tie-up with NGOs or other development organizations. Simon Desjardins suggests some ways in which this might happen (see The vision: energy as catalyst), for example by uploading education videos on to mobile phones. And, as Gyanesh Pandey explains (see interview), introducing telemedicine centres on the back of Husk Power electricity provision is his next project.

This article has looked at the extent to which access to energy brings other development benefits. I’d like to end by emphasizing the value of light per se. 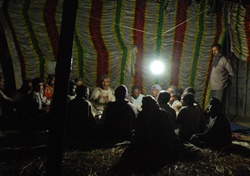 ‘Whether a dollar invested in reducing child mortality or in providing light has more impact is something we debate within Acumen,’ says Karthik Chandrasekar. ‘But to me light is a basic service that needs to happen irrespective, for people to be able to build on their quality of life. Everyone in the developed world takes these basic services for granted. I think these are basically the minimum core services that everybody has the right to.’ (Pictured is a village meeting in the evening, made possible by Husk Power electricity.)

As I have written elsewhere, when I went around villages with Husk Power and Greenlight Planet and asked people why they liked having light and electricity, some of them made very clear, in the friendliest possible way, that this was a silly question, which they would not grace with an answer!